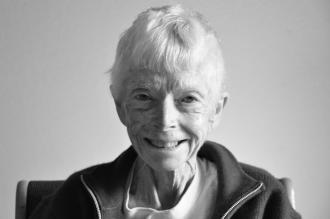 Prominent peace activist Anne Montgomery, RSCJ, died Monday, August 27 at Oakwood, the Society of the Sacred Heart’s elder care center in Atherton, California. Known around the world for her commitment to peace, Sister Montgomery was incarcerated many times after witnessing to peace and justice through acts of nonviolent civil disobedience, in protest of nuclear weapons. Her life will be celebrated in a Mass of Resurrection at 10:00 a.m. on Saturday, September 15, at Oakwood, 140 Valparaiso Avenue, Atherton, CA 94027. Burial will follow in the Oakwood Cemetery.

“Contemplative and a lover of the poor, Anne stood simply and strongly against that which harmed people and the earth, regardless of the cost to herself,” wrote Fran Tobin, a Religious of the Sacred Heart and one of her many friends.

Anne Montgomery was born in San Diego, November 30, 1926 to Rear Admiral Alfred E. and Alice Smith Montgomery. Her only sibling, a brother, Brook, predeceased her. She entered the Society of the Sacred Heart in Albany in 1948, professed first vows in 1951 and final vows in 1956 in Rome. She is remembered with deep respect and affection by Religious of the Sacred Heart around the world, as well as former students and colleagues.

As a member of a Navy family that moved several times during her childhood, Sister Montgomery found a home as a teenager at the Eden Hall Academy of the Sacred Heart in Torresdale, Penn. She graduated with both a bachelor’s and master’s degree from Manhattanville College, also founded by the Society of the Sacred Heart, and later earned a second master’s degree from Columbia University in New York.

Sister Montgomery’s teaching ministry began in classrooms in various Sacred Heart schools, including the Convent of the Sacred Heart in New York City, where she served1959-69. In 1970, she began to teach at the Street Academy of Albany, where she experienced the challenges faced by the poor and people of color. In 1975, after training to educate children with learning disabilities, she returned to New York City to work with school dropouts in East Harlem. In the late 1970s, Sister Montgomery began the work of her life – that of peace and service to the most vulnerable – first at the Catholic Worker House in New York, then with the Little Sisters of the Assumption in East Harlem.  She soon moved into a fulltime ministry as an advocate for peace, which was to continue for the rest of her life. She became known in the peace communities on both the East and West Coasts as a person deeply committed to nuclear disarmament by nonviolent actions. 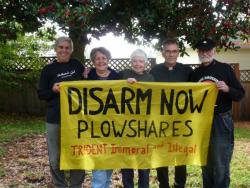 In 1980, as a member of the first Plowshares action called The Plowshares Eight, Sister Montgomery took what was to be the first of several Plowshares disarmament actions. She was arrested and served time in jail several times. Her final Plowshares action took place in 2009, when she was 83. She served her two-month jail term, and four months of house arrest, last year.

The Society of the Sacred Heart sent the following in a missioning statement at the time of Sister Montgomery’s sentencing, “We send you, Anne, on behalf of the Society of the Sacred Heart, to continue your prophetic, educational mission with courage and grace, whether within the walls of prison or without, making known the love of Jesus for our world and all people.”

Sister Montgomery once explained her peace activism by saying, “Civil disobedience is, traditionally, the breaking of a civil law to obey a higher law, sometimes with the hope of changing the unjust civil law. … But we should speak of such actions as divine obedience, rather than civil disobedience. The term ‘disobedience’ is not appropriate because any law that does not protect and enhance human life is no real law.” 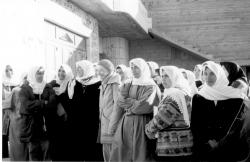 war-torn areas around the world. As a member of the Christian Peacemaker Teams, an ecumenical anti-war nonviolent group, she served as a witness to peace in the 1990s in dangerous conditions in Iraq, the West Bank, Hebron and the Balkans.

Sister Montgomery was also a member of Pax Christi and the Catholic Worker Movement. She received several awards for her work for peace, most recently the 2012 Courage of Conscience Award from the Peace Abbey in Sherborn, Massachusetts, which she received just one week before her death. She was a sought-after speaker and an educator both by example and word, but her true call was to stand as witness to the Gospel.

A prophet for our times.

Sister, you were a role model

The contributions that Anne

Sat, 2014-09-13 06:52
The contributions that Anne Montgomery has given to the society will always be remembered with a lot of respect. The commitment she has towards bringing peace to the world has always been inspiring. I think it is a great loss that she passed away. <a href="http://www.bestwebstartup.com">bestwebstartup.com</a>

Annie Montgomery was my girlfriend

Thu, 2016-03-31 15:19
One of her Catholic Worker friends dubbed Annie "my girlfriend." I always cherished that title with pride. One of the last times I saw Annie she was waiting in a chow line at a birthday party for a mutual friend. She saw me, walked in my direction and planted one right on my lips in public. I loved the scandal and irreverence attached to such a sweet and simple public display of affection. I joked at a memorial service held for her in NYC: "I loved her and was in love with her. If Annie and I were closer in age and met while she a young religious in training, we would have had a torrid and passionate love affair that would have ended very badly. I would have walked away carrying a torch and sending her flowers and candy on Valentine's Day." Gene Roman NYC