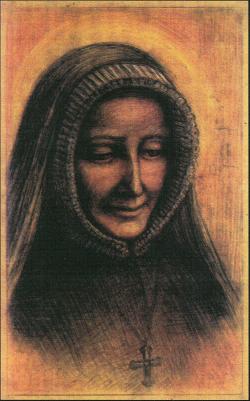 Madeleine Sophie Barat was born in 1779, daughter of a wine cooper in the little Burgundian town of Joigny in France. After an extraordinary education by her priest brother, she went with him to Paris in 1795 to complete her training. There on November 21, 1800, Madeleine Sophie and three other young women consecrated themselves to the Sacred Heart of Jesus. In 1806, she was elected superior general and became the cornerstone of the Society of the Sacred Heart, whose purpose was to make known the love of God revealed in the Heart of Christ, and to take part in the restoration of Christian life in France through the education of young women.

The Society of the Sacred Heart quickly expanded within Europe and beyond. At the same time, Sophie Barat learned to counterbalance her learned view of God as a harsh judge with her experience of the love of God revealed in the Heart of Christ. Her natural capacity for friendship enabled a wide network of relationships. Her awareness of world events and their impact on education ensured the Society’s contribution to the promotion of women in her time and into the future. Her style of leadership tended towards consultation rather than decreed, and to accepting the realistic option, rather than the impossible ideal. Her model of leadership through relationships was tested several times, especially from 1806 to 1815 and 1839 to 1851.

Her habit of a deep life of prayer and reflection, consistently found in her 14,000 extant letters, was stressed in the original Constitutions of the Society of the Sacred Heart of 1815 and reaffirmed in the revised Constitutions of 1982. It remains a vital legacy to the Society and to the wider Christian community.

At the time of her death on May 25, 1865, Sophie Barat was guiding an international community of over 3,000 women, which today extends to forty countries.

No authentic portrait of Sophie Barat exists from her lifetime, since she refused to allow her photograph to be taken. A photograph was taken on her death bed, which became the source of several later portraits.

Madeleine Sophie Barat was canonized a saint of the Roman Catholic Church on May 25, 1925. Her feast is kept on May 25. 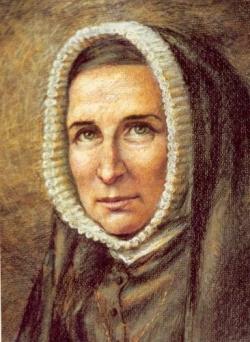 Rose Philippine Duchesne was born in Grenoble, France, on August 29, 1769, into family actively involved in political and commercial life. Philippine, who felt called to religious life from an early age, entered the Visitation convent, Sainte Marie-d’En-Haut, in spring of 1988 at age 18. Four years later, the Revolution closed all religious houses and she was forced to return home.

After 11 years with family and in service to victims of the Revolution, she obtained the use of the building in the hope of re-opening the Visitation monastery, but to no avail. Then, in December 1804, Madeleine Sophie Barat, superior of the Society of the Sacred Heart, arrived. Rose Philippine Duchesne entered the Society of the Sacred Heart, and the two women became immediate and lifelong friends.

Philippine’s dream was to work among the Native Americans of the New World. After 13 years, she received the permission of Mother Barat to go. Philippine and four companions set sail from Bordeaux on the Rebecca, March 21, 1818, and landed near New Orleans on the Feast of the Sacred Heart, May 29, 1818, and from there they arrived in St. Louis, Missouri.

Instead of opening a school there, they were sent to the village of St. Charles across the Missouri River, where on September 14, 1818, they opened the first Sacred Heart school outside of Europe. It was also the first free school west of the Mississippi and the first Catholic school in what would become the Saint Louis archdiocese. By the next year, they relocated to Florissant, Missouri, where in 1820, Mother Duchesne opened the first novitiate. Other houses soon followed in Missouri and Louisiana.

Finally, in 1841, her dream of serving Native Americans brought her and three other Religious of the Sacred Heart to Sugar Creek, Kansas, to establish a school for Potawatomi girls. At 72, too frail to do physical work, and unable to learn the Potawatomi language, she spent much of her time in prayer, gaining the name “Woman Who Is Always Praying.” After just one year, she was recalled to St. Charles, her original foundation, where she died on November 18, 1852, at age 83, having spent 34 years in America. She was declared a saint of the Catholic Church in 1988. Her Feast Day is November 18.

Rose Philippine Duchesne was a pioneer, an educator, a vowed religious. The Society of the Sacred Heart recognizes her participation and complicity in the evil of slavery, out of economic necessity in the slaveholding Missouri of her time, and holds and ponders the complexities of this history. In addition, her fortitude, faith, courage, and humility continue to inspire today. Her shrine at the Academy of the Sacred Heart in St. Charles, Missouri welcomes visitors.