From the Archives: The seal and logo of the Society of the Sacred Heart

October is American Archives Month and so we present excerpts from the United States – Canada Archives, located in St. Louis, Missouri. 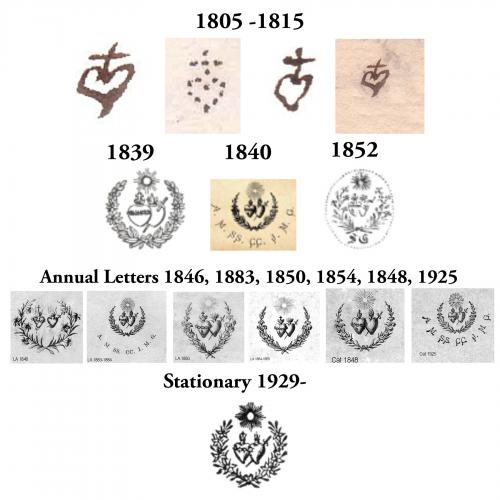 Most institutions have an official seal that usually contains recognizable symbols and/or the name of the institution. For example, an official transcript from a school is embossed with the seal of the school to guarantee authenticity. Frequently in the past, important persons also had a personal seal, often carried on a ring on the hand. In the days of wax seals on documents, the wax while not yet hardened would be stamped with the mark of the seal to signify authenticity. For the Society of the Sacred Heart, the official seal has had a long history, beginning with Saint Madeleine Sophie herself.

On the most recent seal of the Society, we have engraved the Hearts of Jesus and Mary surrounded by two branches of lilies. From early on, initials were added under the seal to indicate from where the letter is coming.
The Superior general has S.G.
the General Assistants AG,
the Superior Vicars: S.V.

Different from this seal is our logo. In the case of the Society of the Sacred Heart, the now familiar logo originated with a design by the late Oonah Ryan, RSCJ, at the time of the bicentennial of the Society in 2000.

In 1982, the central team (the superior general and her leadership team in Rome) had asked Neighborhood Artisans, a workshop in Detroit founded by Oonah Ryan, RSCJ, to design a tote bag that could be given to the members of the coming general chapter. Oonah sent four designs, and ultimately the tote bag idea was dropped. But Nance O’Neil, RSCJ, liked one of the designs, had some note cards printed with it, and used them to write thank you notes everywhere she traveled before and after the chapter. The design caught on and it soon became the current logo of the United States – Canada Province, and the Network of Sacred Heart Schools. It first appeared on the cover of Society catalogs in 1999-2000. Today, it serves as the official logo of the international Society of the Sacred Heart.

The heart represents our hearts, the Society, and the Heart of Jesus. Its openness call us to become as vulnerable, transparent, and welcoming as Jesus is.

Sister Ryan once wrote, “A symbol eliminates the need for words. The heart of each of us sees and responds to whatever we encounter in a unique and valuable way. It is therefore essential that each of us interpret symbols for ourselves. This is what the symbol of the heart and world means to me today.

“The heart represents our hearts, the Society, and the Heart of Jesus. Its openness call us to become as vulnerable, transparent, and welcoming as Jesus is. It is in the shape of a ribbon, to remind us that communication among us is an essential part of our heritage and essential to our survival. It surrounds the whole world to remind us of our internationality. We are called to be open, to embrace, to treasure each other.