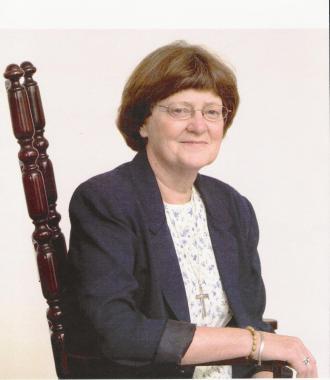 A professor at the Catholic Theological Union in Chicago, Sister Bowe had been staying with her community following a diagnosis of brain cancer and a rapidly worsening condition. She was diagnosed only a few months ago and her colleagues and friends are in shock and mourning.

The author of Biblical Foundations of Spirituality: Touching a Finger to the Flame, she was also co-editor (with three other RSCJ) of Silent Voices, Sacred Lives: Women's Readings for the Liturgical Year. As Sister Bowe once said: "The challenge of faith begins - for every person - with the invitation to know the mysterious deity we call 'God.' But soon we learn that no name, no affirmation about God, no set of descriptors or dogmatic formulas can fully capture the One who is Holy Mystery and so we begin, as Moses did, in every God encounter by taking our sandals off in recognition that we are on holy ground."

She joined the Religious of the Sacred Heart in 1967 at the Kenwood novitiate in Albany, and made her final profession there in 1975. Sister Bowe received her B.A. in American history from Manhattanville College, Purchase, New York; she then earned a Masters degree in Religious Education from Boston College and a Masters degree in Theological Studies and Th.D. in New Testament and Christian Origins from Harvard University Divinity School.

Sister Bowe was born in Schenectady, New York, in 1945. Her parents, both deceased, were Dr. William John Bowe and Margaret Dineen Bowe. She is survived by her sister, Patricia Bowe Wilson of Knoxville, Tennessee, and her brother and sister-in-law, John D. and Susan Bowe, of Moraga, California. Another brother, Timothy Bowe, preceded her in death.

In a letter to Sister Bowe written just before her death, Manhattanville classmate Harrie Mahoney Hughes said: “The places our conversations took us were journeys in themselves—a sharing of thoughts, insights, and values that were years ahead of our chronological age. That was the remarkable thing to me about Manhattanville and your friendship in particular—that two young women could actively participate in their own formation as human beings of conviction and compassion yet still be spirited and products of their own age. It was after all the 60s.”

A Eucharistic Celebration of Sister Bowe’s life will be held at 10:00 am, Thursday, March 18, at Oakwood. A Memorial Mass will take place at Catholic Theological Union in Chicago on April 6th at 4:00 pm. The Mass of Christian Burial and interment is at Kenwood on Saturday, April 17 at 12:00 noon.

Memorial contributions may be made to the Society of the Sacred Heart, 4120 Forest Park Avenue, St. Louis, MO 63108.

Deep appreciation and thanks for the life of Barbie Bowe

Tue, 2010-04-20 15:24
I was a student at Kenwood (1965-1969) when Barbie Bowe was a novice. I remember her very well, despite the years. She was always cheerful and enthusiastic -- and quite good at field hockey, if I remember correctly. When I returned to Kenwood for a reunion about 20 years later/ago, I sat in the Chapel for a while by myself. It was then that I was flooded with the realization of how much those novices -- and all the Religious who were there with the students -- loved us. Many times in my life since then, I have shared with others how lucky I was to be in the presence of so much love during such formative years. Yes, I was encouraged, supported, trained, educated. But what most stands out for me was how much I was loved. Barbie Bowe was a large part of my teenage years and as I read today the mission of RSCJ, I say from experience that she certainly fulfilled it: it was easy to see God's love in the world when I felt so loved myself. I am deeply grateful to have known her when we were both so young. I never spoke with her again after Kenwood that I recall but today, more than 40 years later, I remember quite well "Sister Barbie" and the impact she had on me. I thank God for her life, and I thank the RSCJ community for giving her an avenue of expression. Thanks to you as well for giving me the deep experience of God's love. Mary (Price) Stroupe, Salida, CO

Thu, 2010-06-24 13:41
<p>Less than a hour ago in the current LOGOS, I found that my teacher and guide throughout Israel &amp; Jordan (2003) Greece &amp; Turkey (2004) now dwells totally in Wisdom. I had no word of her passage and am writing these few words for one of the greatest Women of the Gospel I have been privileged to meet &amp; learn from and forever to remember with lasting love. Why is it that our <em>best</em> seem to be taken from us too soon? I am sure Barbara could have biblically explained and comforted me with an answer were she here now on earth. I am asking her now to help me move through this present grief (<em>shock of her loss</em>). It is my clear sense from knowing her, albeit briefly, that she is now one with the Eternal Wisdom she loved and taught so knowingly. Will someone from her Community or Family be able to write me a short note with a memorial card? Had I known of her April 6th Mass, I would have come to Chicago to honor the graced life of this radiant woman. I must stop except to ask again: Why? Such a brilliant mind and soul taken from us. More personally, <em>from myself</em> who loved and respected her like so many of Barbara's friends and students.&nbsp;&nbsp;</p>

Thu, 2010-08-05 12:48
<p>It was with a great sense of shock and sadness that I recently read in the Logos that Barbara Bowe had passed from this life to the life beyond with Christ last spring. What a loss for the world! As someone who looked to Barbara and the other RSCJ professors at CTU as role models in so many things - scholarship, goodness, faithfulness to God, kindness and creating God's kingdom here on earth, I held on to the fantasy that these women would live forever and forever guide the rest of us. But of course, that is not the reality of mortals.</p> <p>I feel that I attended CTU at a very special time (perhaps all of us do!) from 1994 to 1998, during which I felt, for the first time in my life, the most strong sense of belonging to a community and call to work towards the Kingdom of God, not in drudgery but in joy. I had never seen (and have not seen since) such good will among people to live the gospel and Paul's elaboration on how love should look in Corinthians that we hear so often at weddings but which was most ardently practiced by the religious at CTU. Barbara Bowe epitomised Paul's eloquent description of love through her great kindness toward everyone, patience with her students and other faculty members, her commitment to truth, her humble demeanor. I've never met anyone else who lived the Gospel as Barbara did and when I think of her I think of someone who always put others first but whose dignity and sense of self worth were never in question. This was so because she believed so strongly in God's love for her and for all of humanity and creation. Her way challenged the norms of what society says is the right way to live, that says greed, individual pursuit of "success" irrespective of whom or what is harmed, and the, in genertal, "me first" Western ideal. Rather that question how to do it, Barbara lived God's call through the prophet Micah to do justice, love kindness and walk humbly with God.</p> <p>Upon her death, we are confronted, as were the Disciples, how do we carry on the promise that was Barbara's life? How will her goodness continue to be present here on earth through us?</p> <p>&nbsp;</p>

Thu, 2010-09-30 13:19
<p>I just started up on Facebook a couple of days ago and have been looking for old friends. It is with deep sadness that I read of Barbie Bowe's passing. What I remember about her is her kindness and her love of life. When my mother died, she shared with me about her own losses, and the very human toll it all can take. Some of what she did with and for me is still a model that I follow when confronted with the grieving of others.</p> <p>&nbsp;</p> <p>To all of those who have known her more recently than I have, I extend my most sincere condolences for your terrible loss. Until we meet again...</p> <p>...Ruth</p>

<p>It was only very recently

Fri, 2015-06-12 01:12
<p>It was only very recently that I heard of the death of Barbara. I was very sad to hear of her illness, and offer my sincere condolences to the members of her family and community.</p> <p>I am still using all that Barabra taught me at CTU, year and and year out. Always people enjoy what I teach, and I thank God for Barbara's guidance and friendship. Love and Peace,</p> <p>Nellie Versluys rsj (Australia)</p>