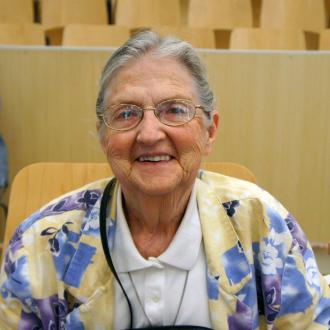 Born on October 18, 1935 in Detroit, Michigan, she was the daughter of Melchoir Hoffman and Viola Lucy Bethny.   Affectionately known as “Mike,” by her friends, she was the second child and the only girl.  Her father died suddenly seven months before she was born.  Her mother, having few resources, remarried the following year, telling Mike later, she had to marry in order to survive.  Mike’s stepfather Henry Palmer was the only father she knew.  The family grew with three more boys being born into the family.  Mike’s early years were troubled as she tried to reconcile the fact she had a different last name than her mother and siblings.  This left her feeling lonely and isolated and she describes herself during this time as rebellious.

A turning point for her began when in first grade Mike suffered a broken collar bone.  Healing from this injury and the subsequent illnesses that followed humbled her and she lost her aggressive behavior and became more passive.  It was during this time she opened herself to conversations with her deceased father which in time turned to God, the Father.  She considers this shift in her prayer life a gift from her father.

When Mike was eight, her family moved to a fruit farm in Detroit, Michigan which Mike equated to a “new birth.”  The open fields and the simple life style made her feel free and at peace.  This atmosphere provided the backdrop for more frequent conversations with God.  Mike’s introduction to the religious life came about when she was twelve, when she met the Carmelite Sisters of the Divine Heart of Jesus.  She attended the Dominican High School in Detroit and became determined to enter religious life.  Her mother and step-father were not happy with her desire but finally relented and Mike entered the Carmelites in 1951 at the age of 15.  Unfortunately, the experience was very difficult for Mike and she asked to leave the novitiate a number of times, but was told that things would improve with time.

Mike made her First Vows at seventeen and was then assigned to a children’s home for boys in Hammond, Indiana.  During this time, she contracted hepatitis and nearly died.  Her family was never notified of these developments.  Three years later, Mike was transferred to elder care in West Allis, Wisconsin where, without training and with little experience, she was responsible for thirty residents.  In 1958, Mike began preparation for her final vows, after which she moved on to an assignment in a Home for the Aged in Detroit while attending a nursing program.  After seven years in Detroit, she began work in another home for the aged in Superior, Wisconsin and partnered with others to remove thirty violations against the institution in order to reach new Medicare standards.  This accomplishment resulted in her being named superior and administrator in Kenosha, Wisconsin.

Her life took on a new direction when she began implementing changes in religious life strongly recommended by Vatican II.  Her community supported these efforts but her superiors did not.  She then wrote the Superior General in Stittard, Holland, who, after a visit to the States, accused Mike of being the source of discontent among her Sisters.

It was at this point that Mike was sent to St. Louis, Missouri to study for her RN.  Over the next three years, she worked at St. John’s Mercy Hospital while completing the requirements for her RN and lived with the Religious of the Sacred Heart at Maryville College.  She then took a few years to discern her next move, and, struggling with the situation in the Carmelite community, she was advised to transfer her vows to another congregation.  After much prayer and good spiritual direction, Mike was received into the Society of the Sacred Heart on the Feast of St. Madeleine Sophie in 1972.

Mike’s first assignment after entering the Society was to the retirement center in St. Charles, Missouri.  The next three years were a gift to Mike.  Mike came to know the Sisters by spending time with them before they came to the retirement center, and listening to their life stories.  The experience of sharing their stories was a gift to the Sisters and to Mike.  Following this assignment, Mike was invited to join a group in England preparing for final profession which gave her the opportunity for a broad exposure to many of the Society houses in Europe.

After this experience, Mike completed her BA degree at Maryville College and then moved to Grand Coteau, Louisiana to work with the poor for the next eleven years.  To get to know the African American and Cajun people, Mike worked in a hospital setting.  She would then follow up at the homes of her patients and taught families how to care for them.  As a result, Mike developed strong relationships with the local people and was visited by them when she was recovering from back surgery.  Over the years, she was responsible for creating a thrift store, a recreation center and a library program.  She was also involved in local government programs, like Meals on Wheels, a food bank, and the re-creation of the Thensted Center, a work for the poor which had fallen into neglect and which, in time, provided emergency shelter for those in need.

Mike’s ministerial work then took her to the Uganda-Kenya province for four years where she offered her nursing skills to the people.  Unlike Grand Coteau, she felt separated from the people by the language barrier.  After her time in Africa, Mike returned to her beloved Grand Coteau until 1990 when she took some time for a three-year sabbatical at the School of Applied Theology in Berkeley, California, where she completed a Master’s degree with a ministry emphasis on empowering the poor.

From 1996 to 1999, Mike worked in the diocese of New Orleans in the Office of Social Apostolate.  Following this, as a result of a heart attack, she returned to Grand Coteau and began training her successor at the Thensted Center.   In 2002, Mike returned to New Orleans and served as a hospice worker with the poor until the government shut down the program.  In 2003, Mike moved to the Oakwood retirement center for Religious of the Sacred Heart in Atherton, California where she spent time volunteering with a hospice agency and working with Sisters suffering from dementia.  In 2006, Mike became the driver for the Oakwood community and offered her help as her health permitted. In time, Mike herself began suffering from dementia but, much loved by sisters and staff, participated as fully as she could in the life of the community.

Quite unexpectedly, in the early morning hours of May 14, 2016, Mike woke to the glory of eternal life.  Her life was an expression of the love and compassion she shared most especially with the poor of Grand Coteau and the elderly in the many places she served in the U.S. and Africa.

Mike was predeceased by her parents and three brothers.  She is survived by her brother Robert Palmer of Crowley, Texas, nephews, Ronald (Kathleen) Hoffman of Holt, Michigan, Brian Palmer of Godfrey, Illinois, and niece Anne Marie Hoffman of St. Clair Shore, Michigan.

A Funeral Mass will be celebrated on May 26, 2016 at 10am in the Oakwood Chapel followed by burial in the cemetery of Schools of the Sacred Heart, Grand Coteau.

Memorial Contributions may be made to the Society of the Sacred Heart, 4120 Forest Park Avenue, St. Louis, Missouri  63108.