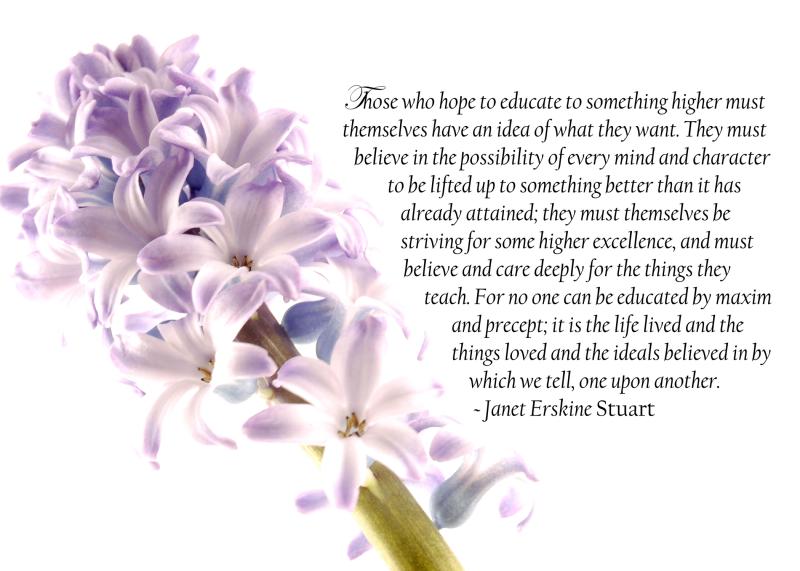 By Michael Pera, Assistant Archivist, Society of the Sacred Heart

On May 6th, we celebrate Janet Erskine Stuart’s call in Hyde Park over 130 years ago. Blue Hyacinth Day is an opportunity to reflect upon Mother Stuart’s vocation and to consider our own, as well. Many of us, however, are not able to point to a singular moment when “The Word of the Lord” came to us. Many of us experience a call in stages, a long spring of understanding rather than a single blaze of color. What strikes me most in reflecting on Janet Stuart’s moment in the garden is not so much its singularity as its presence in a much longer story. Those blue hyacinths were neither the beginning nor the end of Mother Stuart’s call. She had already been grappling with conversion and her call to religious life for four years. She felt constrained by her desire to protect her family from further grief and unsure of her future. Her moment in the garden did not remove those concerns, but it allowed her to look beyond them, to accept the call she so desired. And while her future was beginning to take some shape, she still did not know what her role in the Society would be.

When reflecting on Janet Stuart’s call, it becomes clear that her experience before the blue hyacinth was not a single burst of inspiration, but a blooming that was only possible because of her careful cultivation of her soul. God provided the seed, but it was only able to take root because of her openness to it. This sort of symbolism is familiar in my life. My first confessor was fond of using the analogy of a garden for the soul. Too often, I would come to him in confession only to be reminded that I was weeding my gardens without allowing anything to grow. Gardens require intentional care, not merely the elimination of weeds and hoping for the best.

Often, I fear that in my life I too often abdicate my responsibility to discern actively my vocation. Sometimes some major choices seem to be made without the reflection due their significance. But I know that the moments of decision in my life, choosing to be married, choosing to become a father, choosing to work for the Society of the Sacred Heart, are all the result of prayer, discernment and years of formation. Even though I did not always understand what I was preparing for, God still worked with what I did. And proving that He has a sense of humor, rowing practice in the early morning in college proved all too useful for the sleep deprivation of parenting small children.

Janet Stuart is a wonderful example to all of us. She did not idly wait for the Word of God, but tended to her soul, reading, praying and discerning, making sure that she was ready to respond to God’s call when it came. It is a great time of year to do a little gardening of our own.