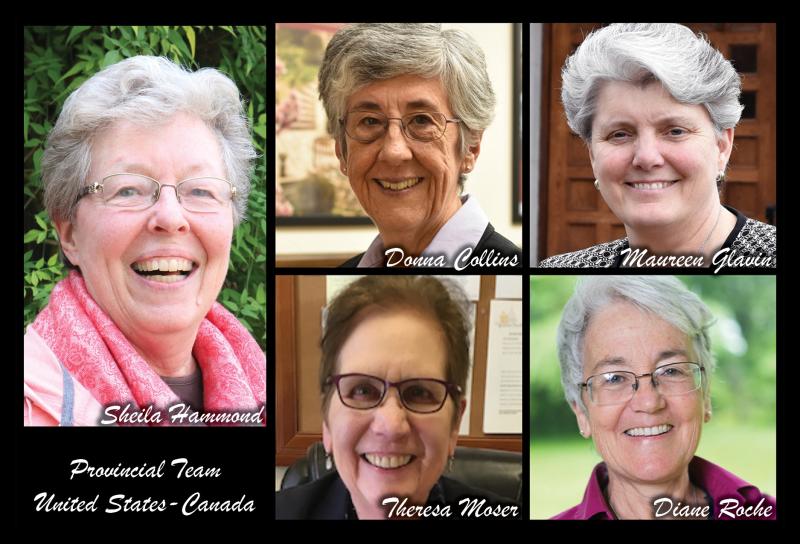 The Central Team announced they have named Sheila Hammond, RSCJ, provincial for the United States – Canada Province, 2018-2021. She currently serves as provincial.

Sheila Hammond, RSCJSheila Hammond was born in Chadron, Nebraska, and grew up in Chicago, Illinois. She joined the provincial leadership team after seven years as the director of pastoral care at Saint Louis University Hospital in Missouri. Previously, she served as a member of the Society’s provincial team with Provincial Kathleen Hughes, RSCJ, 1999-2005.

She has also served as director of chaplaincy services at Massachusetts General Hospital in Boston; director of formation for the Society’s former United States Province; and chaplain for hospitals in Detroit and Ypsilanti, Michigan.

Sister Hammond earned a graduate degree in theology from Saint Louis University and completed her bachelor's degree at Manhattanville College in New York. She is a certified educator by the Association for Clinical Pastoral Education (ACPE) and the National Association of Catholic Chaplains (NACC).

Donna Collins, RSCJDonna Collins is originally from Brisbane, Australia. She most recently served as principal of Villa Duchesne High School in St. Louis. For six years, she was secretary general of the Society of the Sacred Heart in Rome, Italy. She also served in Rome on the Sophia Commission, a group whose mandate was the integration of education and justice, peace and integrity of creation at the international level.

Prior to that, Sister Collins was principal at Josephinum Academy in Chicago; coordinator of the Association of Sacred Heart Schools in Australia and New Zealand; and teacher, dean of students and assistant to the head of school at Academy of the Sacred Heart in Grand Coteau, Louisiana. She has recently spent time renovating the museum she created for the Academy in Grand Coteau and serves on the provincial Bicentennial Planning Committee.

She previously served on boards of trustees for Schools of the Sacred Heart and Josephinum Academy, both in Chicago.

Sister Collins earned a bachelor’s in psychology and a master’s in educational administration from Boston College. Her teaching credentials are from Griffith University, Queensland, Australia. She also trained in spiritual direction at Claret Center, Chicago.

Maureen Glavin, RSCJMaureen Glavin is originally from upstate New York. She is currently on sabbatical in Ottawa, Canada, where she lives in a community of international hospitality and education.

Among her other ministries in the Society, Sister Glavin served as assistant principal of Our Lady of Guadalupe School in Houston, Texas, and as director of the junior high school at Carrollton School of the Sacred Heart in Miami, Florida. For the past 13 years, she was head of school at the Academy of the Sacred Heart (Philippine Duchesne’s first and last American home) in St. Charles, Missouri. She currently serves on the Society’s provincial Bicentennial Planning Committee.

Early in her career, Sister Glavin worked as a technical specialist in a pharmacology lab at Upstate Medical Center; a teacher in Eastern United States schools; and a lay volunteer at a junior seminary in Tanzania, East Africa, serving as an instructor of secondary level English, math and science. Sister Glavin serves on the boards for Villa Duchesne and Oak Hill School in St. Louis and the School of the Sacred Heart in Montreal, Canada.

She earned a bachelor’s in chemistry from St. Lawrence University in Canton, New York, and a master’s in theology at St. Thomas University in Houston.

Theresa Moser, RSCJTheresa Moser is originally from Dallas, Texas. After teaching as a faculty member at John Carroll University in Cleveland, Ohio, and Loyola Marymount University in Los Angeles, California, she moved to the University of San Francisco where, for 23 years, she held administrative positions in the dean’s office of the College of Arts and Sciences. She retired from that position in 2013 and is currently parish office administrator in St. Ignatius Parish on the University of San Francisco campus.

Sister Moser is a past president of the College Theology Society, a national professional association, and served for 10 years as secretary of the Catholic Theological Society of America. She is a past member of the boards of Schools of the Sacred Heart in San Francisco and Forest Ridge School of the Sacred Heart in Bellevue, Washington. Currently, she is a member of the board of trustees of the University of San Diego.

She earned a bachelor’s degree from Maryville College of the Sacred Heart in St. Louis; a master’s from Saint Louis University; and a doctorate in religion and society from the Graduate Theological Union in Berkeley, California. She also earned a licentiate in sacred theology from the Jesuit School of Theology in Berkeley, part of Santa Clara University.

Diane Roche, RSCJDiane Roche is originally from Boston, Massachusetts. She currently serves as director of the Society’s Office of Justice, Peace and Integrity of Creation for the United States – Canada Province in Washington, D.C.

Sister Roche has spent the better part of four decades living and working in poor, urban neighborhoods in the United States and Haiti. Her training and deepest interest is in the field of affordable housing, having served as a property manager in Boston, St. Louis and Washington, D.C. She has also served as executive director for several nonprofit community development agencies and was director of ministry for the Society’s former United States Province from 1994-2000. She has served on the boards of Villa Duchesne and Oak Hill School in St. Louis and the Regis School of the Sacred Heart in Houston.

She earned a bachelor’s in English from Emmanuel College in Boston and a master’s in urban affairs from Boston University.