By Lyn Osiek, RSCJ, Archivist for the Society of the Sacred Heart, United States – Canada Province 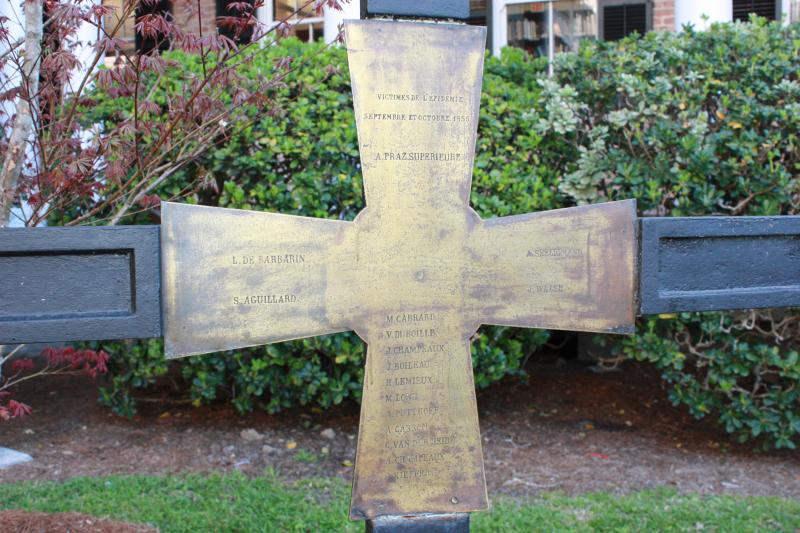 In the world of the first Religious of the Sacred Heart (RSCJ) in the United States, but also in their former lives in Europe, there was constant threat of cholera, and in tropical climates, of yellow fever. No one knew how either was communicated. Cholera is a bacterial infection acquired from contaminated food or water. Yellow fever is a viral infection carried by mosquitoes. People feared that both were contagious. The following information about both diseases appears in Philippine’s letters.

Upon the arrival of the first RSCJ in New Orleans, Louisisana, at the end of May 1818, they were grateful that there was no yellow fever in the city when they arrived. In 1822, Philippine made her first visit to Grand Coteau, Louisiana, a year after the founding of that community. To catch the steamboat for her return to St. Louis, Missouri, she had to go to New Orleans and was told that there was no yellow fever there. By the time she arrived, it had broken out. Philippine was infected. Nevertheless, she and her student traveling companion, Therese Pratte, boarded the steamboat Hecla, where four soon died, including the captain and his assistant. All the passengers had to disembark at Natchez. Philippine was very ill, and at first, no one would receive her out of fear of contagion. Finally they were taken in by a widower whose wife had just died. She recovered slowly before resuming their journey home.

Cholera also ravaged the populations. There were cholera epidemics in New Orleans and St. Louis in 1833, 1834 and 1849. In 1832 to 1833, there were also cholera epidemics in France that killed 25,000, including Casimir Perier, Philippine’s cousin, who was at the time president of the Chamber of Deputies, equivalent to secretary of state. In 1834, cholera killed six RSCJ at St. Michael, Louisiana. In 1838, it killed six RSCJ at the Trinità dei Monti in Rome.

Some excerpts from Philippine’s letters:

New Orleans has finally recognized in the cholera epidemic that only religion can make one risk death to help the unfortunate. During the visit that a committee made to the hospital at the end of the epidemic, they found victims who were completely abandoned, to whom nothing had been given for several days, dying people lying on the dead, and finally, one decaying corpse in which chickens were looking for food, with no one to bury it. The city called the Sisters of Charity in to that hospital. They are already spread through the East and here. A few days ago, twelve passed through here to go down the Mississippi. They already have in New Orleans a house for more than one hundred orphans. The cholera has returned to that city with rigor and has impeded progress on our house at Saint Michael, the most numerous one.

The city of Saint Louis is the place where the cholera has done its cruelest damage; every day there were more than 100 dead and up to 150 and 180. One week, there were 900. Now, they are happy if they have only thirty or fewer, but the epidemic is running through the countryside and attacks the population newly arrived from Europe. Our sisters in Saint Louis have lost Mother Prud’hon, the treasurer, Mother

Gardener, mistress of the day school, and four aspirants or novices who were very young. The other communities each lost two or three sisters. Mother Gallwey was in great danger, but recovered and came here with eight of her daughters for a change of air (from Saint Louis City House to Saint Charles). She returned and will come back with other sisters. We have been exempt from cholera, but it is ravaging the rural area. They think that the fatal fire that destroyed 300 houses on eight streets, which burned for several days in basements, contributed to spread the contagion. Imagine the idea of the poor people abandoned, exposed to all weather, without food, etc. No priest died, and they were on their feet day and night.

The end of Philippine’s life was not the end of epidemics, of course. In 1853, a yellow fever epidemic spared St. Michael, but in 1855, it returned to kill 16 RSCJ and three students in two months. One of the first was Annette Praz, the superior. They died so fast that no one had the time or information to compose their obituaries. Instead, all their names were placed on a cross that was raised above the chapel. When St. Michael was closed in the 1920s, the cross came to the Academy of the Sacred Heart (The Rosary) in New Orleans, where it was rediscovered in 2010 and is now in the front garden.