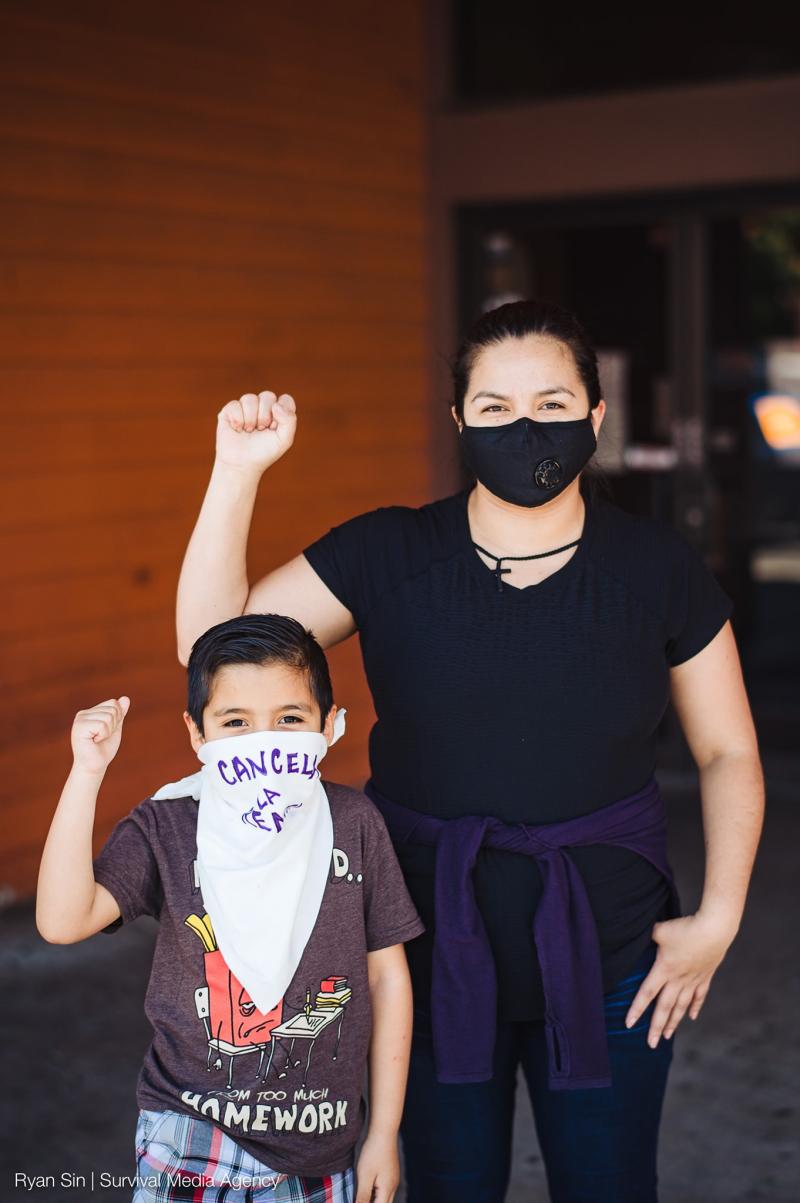 I met Alma and her 7-year-old son Abraham at a rally and car caravan last year on May Day in Concord, California, in the greater San Francisco Bay Area. The rally was part of nation-wide protests calling for the cancellation of rents and mortgages during the pandemic as so many had lost jobs and struggled to pay the bills. Alma was eager to connect with other renters in the same situation and to take action after seven weeks of isolation and gnawing anxiety since she lost her job cleaning houses. She shared with me in Spanish, “We live in fear and with stress, every day. I suffer from insomnia, headaches, hair loss, just by thinking about when they will evict me like the property management has threatened. My son keeps asking me if we are going to end up homeless.” To make matters worse, the landlord had just issued a notice of a rent increase on June 1, 2020, to her and her neighbors in the 300-unit apartment complex.

Alma kicked into gear and started organizing her neighbors to fight back against this rent increase. She was indignant: “How are they able to raise the rent when we can’t even pay? This is unjust and inhumane. They demand that we pay and we don’t even have enough food to eat.”

The tragic irony is the Clayton Crossings building she lives in is home to many low-income tenants and qualifies as affordable housing under the federal Low-Income Housing Tax Credit program. Perplexingly, this legal status made it exempt from the temporary eviction moratorium

My community-based organization supported the tenants in their tenacious efforts for the past nine months as they sent letters to the property manager and elected leaders, testified at City Council and organized a series of community pickets in front of their building. They were able to forestall the rent increase for only two months. It went into effect on September 1, 2020. Yet the tenants continue to fight it, as this is as much an ethical crusade as it is an economical one.  (You are invited to sign the petition if you would like).

Alma’s words and uphill struggle to stop/roll back the rent increases haunt me. Their campaign has revealed the faceless grinding gears of systemic and racial injustice that keep turning no matter the human suffering.

The tenants at Clayton Crossings, mostly Brown and Black folks, have not even been able to plead their case with the owners of their building. In fact, they don’t know who the owners are. The property manager(s) with whom they interface deflect responsibility, saying they are not the ones making the decisions. They do not reveal who the owners are. The trail leading to the owners has been hard to track as it’s just a list of Limited Liability Corporations (LLC’s) that obscures who is really in charge. The trail did point to wealthy investment corporations in California’s San Fernando Valley.

And that is just who has stood to gain exponentially in this pandemic – at the expense of people of color. During the Great Recession, between 2007 and 2010, white families experienced a 10 to 13 percent mean loss of wealth, but the mean wealth loss for African American families was 31 to 34 percent, and for Hispanic families even higher at 44 to 50 percent (Urban Institute, 2013). Some describe what has happened in the ensuing years as a land grab, noting that white investors more often bought up foreclosed properties and sold them or turned them into lucrative rental properties. I personally watched 29 working-class, predominantly Hispanic and Latinx families, evicted from a complex in downtown Concord in 2018, after an investment firm bought the complex.

I think it’s normal and expected for one’s property to yield maximum profits – whether you are a firm or a family seeking to augment your retirement or vacation fund. However, I once witnessed a rent mediation hearing where a gentleman recently acquired a rental home and raised his tenant’s rent 1,000 dollars a month. The mediator probed what justified the dramatic increase – were there repairs or unexpected costs? No. The man had done more “market research” and determined that the new price was fair market value. It’s this type of behavior that has contributed to an eviction crisis, even before the pandemic hit.

As I continue to grapple with the cruelty of this market-driven housing system that is perfectly legal and normalized, and maybe even sacrosanct, I can’t help but think of the institution of enslavement. I wonder how anybody could have participated in it or legitimized it. I think of Catherine Mooney’s provocative presentation at the 2017 Spirituality Forum as she shared the disturbing truth about Saint Philippine Duchesne, the Society’s complicity and participation in enslaving Black persons, and the failure to condemn the institution of enslavement at the time (consistent with the Catholic Church). She explained, “... I think it’s safe to say that, by and large, it was without malice. They had a blind spot. While others in America were denouncing slavery, they continued to be implicated in the evil. They were blind and did not see.”

I am compelled to wonder what blind spots we have now. In 100 years, how will our great grandchildren’s generation view our prevailing acceptance of housing-as-a commodity or the unregulated profiteering off of people's homes? Might the hundreds of thousands of recent evictions and those looming be likened to that of the devastation caused by the Trail of Tears?  And what might be said of our silence or complicity?

In this Lenten season, and beyond, I pray that God may give us eyes to see.