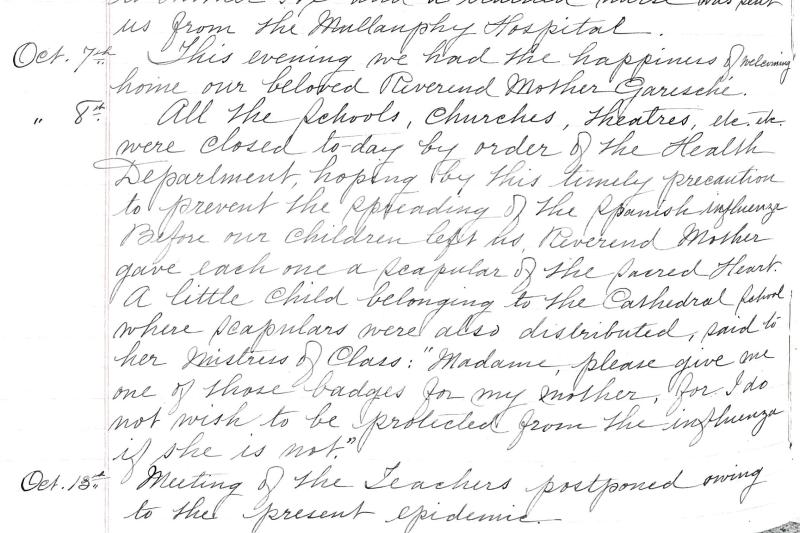 In seeking to understand and grapple with the current outbreak of COVID-19, many have understandably reached for the worst pandemic of the 20th century, the 1918 Spanish Influenza. Given that interest, the Province Archives of the Society of the Sacred Heart decided to see how the Society in the United States was affected by that pandemic. We focused our search on St. Louis and Philadelphia, in part because these two cities had vastly different public health responses and very different outcomes.

Luckily, the former Academy of the Sacred Heart, located on Maryland and Taylor in the Central West End, and known as City House, in St. Louis had extensive entries in their annual house journal on the school and community’s experience.

The first entry referring to the influenza is dated October 8, 1918:

All the Schools, Churches, Theaters, etc., etc. were closed to-day by order of the Health Department, hoping by this timely precaution to prevent the spreading of the Spanish Influenza. Before our children left us, Reverend Mother gave each one a scapular of the Sacred Heart. A little child belonging to the Cathedral School where scapulars were also distributed, said to her Mistress of Class: “Madame, please give me one of those badges for my mother, for I do not wish to be protected from the influenza if she is not.”

Throughout the next six weeks, there is a litany of events cancelled or curtailed due to the pandemic response, even including the celebrations for the signing of the Armistice ending World War I. It was not until November 14 that the ban was lifted and students were able to return to the school. The ban had to be reinstated on December 9, to last through the Christmas holiday. The journal keeper noted on November 14 that, “…the timely precaution taken by the St. Louis Board of Health in closing Churches, schools, theaters, etc. etc. has certainly saved many lives here.”

The Society’s experience in Philadelphia, at the former Convent of the Sacred Heart known as Eden Hall, was unfortunately less happy. Philadelphia’s public health director, Wilmer Krusen, refused to cancel events, including a Liberty Bond Parade in late September. Within 72 hours of the parade, all of Philadelphia’s hospitals were full and by the end of the week, 2,600 were dead. At Eden Hall, 40 students and many of the religious were simultaneously ill. The Eden Hall house journal lists many events going on as planned, in contrast to City House’s experience.

One of the remarkable features of the 1918 Influenza was how deadly it was for young adults, who are normally the least vulnerable population. Elizabeth Kennard, RSCJ, a young religious at Eden Hall, succumbed to the flu in October. Her roommate, Mary Patterson, RSCJ, recalled that, “The doctor had said that, without a miracle, someone would die. She offered her life for the children and the rest of us, and it was accepted.”

Infectious disease has long been a part of the Society’s history, from Saint Rose Philippine Duchesne and her companions experience with Yellow Fever and other diseases in the New World in the 1800s, through the Spanish Flu and now COVID-19. Throughout it all, confidence in the love and comfort of the Heart of Jesus has and will continue to sustain us.