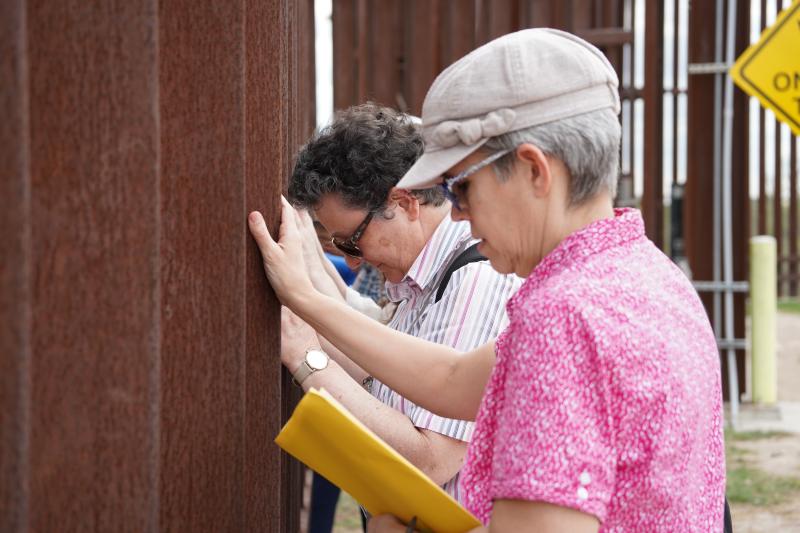 The Stuart Center in collaboration with ARISE, a nonprofit in Alamo, Texas, hosted a four-day border witness program to offer an enriching, educational and powerful experience of life on the Texas – Mexico border. Below is a recap of the program, which ran from February 16-20, 2020.

Those participating in the Stuart Center’s border witness program (RSCJ, Associates, partners in mission) learned about the mission and work of ARISE in the Rio Grande Valley. They also visited a portion of the border wall in Hidalgo, Texas. The group, guided by staff from ARISE, prayed over the wall, and over one-mile, they observed some of the realities for those seeking to cross, often for asylum and for better opportunities.

“It was heart wrenching and at the same time a call to action,” said Cecile Meijer, RSCJ.

Notably, participants saw, first-hand, the conditions of families and individuals, all asylum-seekers, living in a "tent city" in Matamoros, Mexico, just walking distance from Brownsville, Texas.

This community in Matamoros exists due to Migrant Protection Protocols (MPP), or the "Remain in Mexico" policy, a policy put in place under the current administration in 2019. Under this policy, the U.S. government will return certain asylum-seekers to Mexico to wait while their asylum case is pending in the U.S. immigration court system. There are some 2,500 asylum seekers in Matamoros.

Sister Norma, having worked heavily to help organize and assist this growing community, noted that only about 1 percent of these people seeking asylum are granted entry into the United States.

The group also visited the Humanitarian Respite Center, run by Catholic Charities of the Rio Grande Valley, and met several individuals allowed to stay in the United States while they await their court hearing.

Sister Norma also noted that, at one point, the center was receiving some 1,000 immigrants daily; and now, after the implementation of MPP, the numbers have dropped drastically, usually with well under 100 persons needing services each day.

For more on MPP visit: cliniclegal.org/resources/asylum-and-refugee-law/analysis-dhs-issues-remain-mexico-policy-and-guidance

In the final two days of the border witness program, participants divided into two groups and had the opportunity to visit two immigrant detention facilities where minors are held. One group visited a facility for girls ages 12-17; the other, a facility for boys ages 12-17. No photos were allowed during these visits. Participants had the chance to observe and ask questions to the staff but were not allowed to interact with the youth aside from greeting them.

“At first glance, the facility provides services very similar to youth detention centers in a variety of urban areas, in a highly restrictive environment. At the same time, each child has experienced trauma, malnutrition and daily challenges for the necessities of basic needs,” said Bridget Bearss, RSCJ.

“It is a paradox of both gratitude, that they experience a temporary reprieve, and regret, that any child finds herself in this situation of uncertainty and fear. Staff reported feeling the contradiction of being deeply committed to the children and knowing the reality of their lives. I experienced the same.”

Sister Bearss went on to say she continues to carry the images of each child in her heart. They are children caught in the crossfire between people and policy. The call to live more humanly is vivid as she recalls the daily human needs that are missing in the lives of these children and the need for the presence of community to nurture their spirits. She shared we are called to respond to their needs and to be responsible to do whatever we can to repair the damage, restore their dignity and build bridges of relationship.

In addition to these visits, participants attended a presentation on the systemic issues of immigrant detention centers and the border wall – where the funding has come from, the environmental impact of the current and future wall, and the reality of its effectiveness. In addition, they heard from two representatives of Casa del Migrante, a ministry serving people on the move, located in Reynosa, Mexico.

Their time together ended with praying and reflecting on all they had heard and witnessed throughout the week. Each participant committed to at least one concrete action, moving forward, on how she will uphold and support the dignity of people on the move in the United States, Mexico, Honduras and throughout the world.