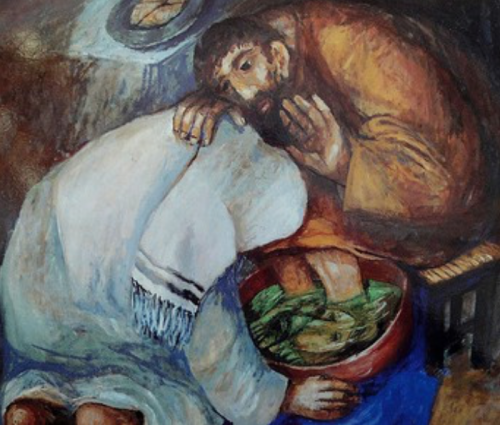 Washing of the Feet by Father Sieger Köder

What I am doing,
you do not understand now,
but you will understand later.
John: 13:7

See Him silent and lifeless;
See him alone and forlorn;
See him broken and helpless
Crowned with a garland of thorns.
See him as son and as brother;
See him related to all;
See him through the grief of a mother;
Hurting the most of all.
See him as healer and teacher;
See him as helper and friend;
See him as prophet and preacher;
Ignore him? I doubt you can.

Father John of the Cross is one of the few men in this monastery who has anything to say in a sermon.  When it is his turn to preach, everybody listens.  What he preaches is really the Gospel, not words about the Gospel or knowledge of the Gospel, or yet knowledge of Christ.  It is one thing to preach Christ, another to preach that one knows Christ.  I know the integrity of this man is very costly to him.  He suffers very much in order to be true to his own heart, that is, to the heart which God has given him, and which has in it a mysterious command that no one here is able to understand.

Then even acts that would otherwise disconcert us and would seem ambiguous in themselves are accepted because we know who he is.  The transition point comes when we know the inmost desires of our friend’s heart.

So, in the Passion of Jesus and in His apparent failure, His yielding to destruction, when He could have saved Himself:  the inmost desire of His Heart is to love the Father and to be about the Father's business.

He alone knows the way, which is that of the Cross.  I would perhaps add, on my own, that the inmost desire in the heart of Christ makes itself somehow present in us in the form of that little point of nothingness and poverty in us which is the “point” or virgin eye by which we know Him! 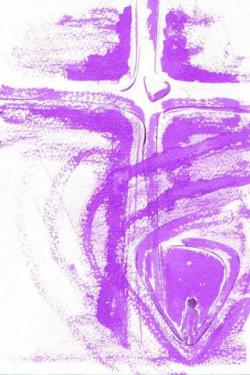 Jesus calls us to
a personal encounter with Him.
He wants to make known to us
the feelings and preferences of His Heart.
(Constitutions of the Society of the Sacred Heart, #18)