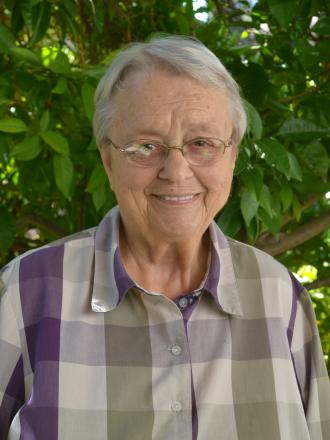 Alice Louise Mills, RSCJ, a Religious of the Sacred Heart, was born on October 8, 1931, in Arnaudville, Louisiana, to Gordon Joseph Mills and Birdie Ellen Gulley. Her mother died when Alice was fourteen. Her unexpected death was a shock to the family. Her only brother, Dr. Gordon Mills, died in 2016.

After graduating from Arnaudville High School in Arnaudville, Louisiana, in 1948, Alice went on to the College of the Sacred Heart in Grand Coteau, Louisiana, completing a B.A. in English. It was during this time that she developed a religious vocation, which her father supported. Following graduation, she entered the Society of the Sacred Heart at Kenwood in Albany, New York. Alice made her first vows in 1955 at Kenwood, and her final profession in 1961 in Rome, Italy. Sister Mills later completed graduate studies at Our Lady of the Lake University in San Antonio, Texas, earning a Master’s in Education in Guidance and Psychology.

Sister Mills’ first assignment after first vows was at Clifton Academy of the Sacred Heart in Cincinnati, Ohio, where she taught sixth and seventh graders. She loved this age group! After final profession, Sister Mills was sent to Woodlands Academy of the Sacred Heart in Lake Forest, Illinois, newly established at that time, where she taught for seven years. In 1968, Sister Mills was asked to return to the south and was sent to Duchesne Academy of the Sacred Heart, the new school in Houston, Texas, where she remained for the next seven years. With her love of middle schoolers, she believed this age group needed time and a place to be heard, with the result that small group sessions were held for these girls. Her MA in Education with the emphasis in guidance and counseling supported her dream.

When Sister Mills moved to Grand Coteau, she began a thirty-nine year ministry of enriching the lives of hundreds of children. In 1990 she transferred her skills to the poor and marginalized families who came for help at the Thensted Center. She was particularly valued for her dedication to grief counseling. For the last few years before she left Grand Coteau, Sr. Mills served as a docent in the St. John Berchman’s Shrine, a work that was very important to her.

In 2014, Sister Mills reluctantly gave up her work in her beloved Grand Coteau and retired to Oakwood, the retirement community for the Religious of the Sacred Heart, where she participated in community life with her sisters.

After several strokes, she became increasingly incapacitated until finally, on July 20, 2017, accompanied by her sisters in the Society of the Sacred Heart, Sister Alice Mills breathed her last ever so peacefully.