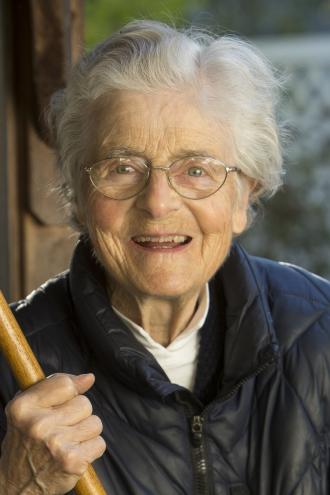 Sister Johnston graduated from Manhattanville College in 1954 with a bachelor’s degree in microbiology, followed by graduate degrees in history and interdisciplinary arts in 1964 and 1971, while she was on the college staff as academic advisor and residence counsellor. She went on to Saint Louis University where she earned a third graduate degree in interdisciplinary theology and psychology in 1975.

Sister Johnston held faculty positions at Emmanuel College and Boston College in Massachusetts, where she was an adjunct professor and lecturer while pursuing the Ph.D. in Hebrew Bible, which she completed at Boston University in 1983. She was an assistant professor at the University of San Diego from 1984 to 1988. Beginning in 1988, Sister Johnston was a faculty member at Bangor Theological Seminary, where she was an associate professor of Hebrew Scripture and, in 1993, the George A. Gordon Professor of Old Testament Languages and Literature. During sabbaticals, she was visiting professor at Union Theological Seminary in New York and Yarra Theological Union in Melbourne, Australia. Sister Johnston had a number of published works, and she was a member of several professional organizations and societies.

In 2016, Sister Johnston retired to the Abba House retirement community in Albany, New York. As she needed more care, she moved to the Teresian House community in 2018. Sister Johnston was known for her kindness, as one of her sisters shared after being informed of her death. She would show up at just the right time, with such gentleness and kindness, as she ministered to a sister who was going through cancer treatments, sitting and praying with her. Toward the end of July, Sister Johnston’s health deteriorated, and she peacefully went to God on September 22, 2020.

Sister Johnston is survived by a sister, Jane Johnston Pinkerton, and brothers Peter, Jerome and Joseph and many beloved nieces and nephews and their children.