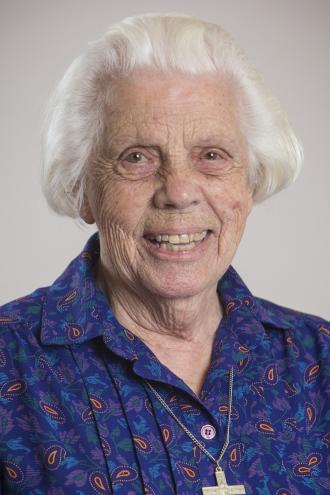 Anne Davidson was born in San Francisco, California, on July 25, 1921, to Kathryn O’Brien and William John Davidson. Born prematurely she was placed in one of the first incubators at the hospital. Anne spent her first year of life in very poor health, hanging between life and death. Her father’s job required the family to travel a great deal. When Anne was two, the family moved to Europe, where they spent the next eleven years. Anne and her sister Margaret, two years older, attended school first in France, then in Switzerland, and then in Spain. While in school in Europe, Anne began her life-long study and practice of art, first watercolor and then oil. She also studied ballet, and even in her later years loved to show her sisters her dancing ability.

In the early 1930s, because of the Great Depression at home and the brewing of the Spanish Civil War, Anne, her mother, and her sister moved back to California. Anne attended a local Catholic high school in San Francisco, again a very happy time for her. When, in 1939, she began college at San Francisco College for Women (Lone Mountain), she had attended seven different schools in four different countries. She spoke French. Spanish, Italian, German, and English. It was at Lone Mountain that Anne realized she had a religious vocation. Her mother was “surprised and shocked,” but acquiesced. Anne entered the Society of the Sacred Heart on August 24, 1940, at Kenwood, in Albany, New York. She spoke of herself as “filled with joy and consolation.” This happiness, however, was short lived. She loved the opportunities for prayer each day, but she said, “The work was new to me and hard. I had never done housework or picked fruit in the fields. Sometimes I wept from mere exhaustion.” She persevered, however, under the direction of Mother Agnes Barry, and pronounced her first vows on May 1, 1943.

Sister Davidson’s first assignment after first vows was to Woodlands Academy of the Sacred Heart in Lake Forest, Illinois, where she taught the youngest children. After two years, she was transferred to the elementary school on Broadway in San Francisco. She was a gifted teacher of pre-school children. When it was time for her to go to Rome for probation in preparation for final vows, she develop the flu, which turned into pneumonia, and she was close to death. On recovery, she was able to leave for Rome in the fall of 1948. Her memories of probation are scanty, other than that the time was very happy. She felt “at home” speaking French and sometimes Spanish. Sister Davidson made her final profession on February 9, 1949.

After final vows, she resumed the study of art. She took lessons in charcoal drawing at Barat College in Lake Forest, Illinois, architectural drawing at the San Diego College for Women, and a variety of art classes back at Lone Mountain. She studied only during the summers and received her bachelor’s degree from Lone Mountain, with a major in art in 1955. Over the ensuing years, Sister Davidson taught, as she recalled, “everything from pre-school to language classes to college art classes.” But it was at Lone Mountain that she really become an art professor and taught art full time. Her favorite responsibility, however, was that of sacristan, a position she held for twenty-five years. Then came the changes in the Church and the Society as a result of the Second Vatican Council, 1962-1965. Having observed that our elderly sisters were being cared for by lay nurses, Sister Davidson asked permission to attend nursing school. She obtained a Volunteer Nursing Diploma from the College of California Medical Affiliates, and then a Volunteer Nursing License from the State of California in 1970. In 1971, Oakwood, the Society’s retirement center at Atherton, California, opened to receive nuns primarily from the West Coast. She was privileged to nurse there for three years, lovingly caring for our elderly sisters. Although she was happy in this ministry, the work proved too strenuous. She was then free to return to the study of art. She returned to Europe, and from September 1973 to February 1974, she studied woodcarving in Madrid and metal relief in Paris.

When Sister Davidson returned to the United States, she took several programs to prepare herself for parish ministry, among them, a lay ministry workshop at St. Patrick’s Seminary in Menlo Park, California, and a Women and Ministry Institute at the University of San Diego. She then became a Eucharistic minister at Sequoia Hospital in Redwood City and at St. Mary of the Assumption Cathedral in San Francisco, driving herself to these different locations. She loved bringing the Blessed Sacrament to patients in the hospital, to parishioners from the cathedral, and to other homebound persons. She was much loved by the recipients of her ministry. In 1977-78, she took part in a clinical pastoral education program at Presbyterian Hospital in San Francisco. A decade later, she participated in the spiritual direction workshop at the Mercy Center in Burlingame, California. During these years, she lived in a number of communities in San Francisco.

In 2005, Sister Davidson attended a workshop under the direction of Father Brendan McEnerny, where she met the master Russian iconographer Vladislav Andrejev and began studying the theology and practice of iconography. This theology and art form combined her two great loves: her love of art and her love of prayer. The personal prayer of the iconographer before, during, and after drawing, or “writing,” the icon is essential for the authenticity and beauty of the icon. Sister Davidson received many commissions for her icons: in St. Mary’s Cathedral in San Francisco, at the Academy of the Sacred Heart in St. Charles, Missouri, and after she became a permanent member of the Oakwood community in 2006, the Stations of the Cross in the new chapel in the Sacred Heart school in Seattle. Also at Oakwood, she wrote the beautiful icon of the Visitation, representing the visit of Mary to Elizabeth shortly after the Annunciation.

As soon as Sister Davidson became a resident at Oakwood, she continued to be of service. For example, she helped in the infirmary and drove the nuns to their doctors’ appointments, to and from the hospital. She also went every week to Rosner House, an adult daycare center in Menlo Park, California, where she joined other adults in their daily activities. For these outings she always, no matter the season, donned hat and gloves. In a few years’ time, however, her memory began to fade. In a relatively short time, her short-term memory was almost completely gone, although her long-term memory was still vivid. For example, she could remember her childhood in Europe but not what she had done fifteen minutes earlier. A poignant example of this memory loss, so debilitating for Anne, was the incident when the new director of Oakwood showed Anne the icon of the Visitation hanging outside the director’s office. Anne could not remember that she had done that beautiful work of art.

Although, in her later years, Anne enjoyed very good physical health, toward the end of October 2019, her heart and lungs began to fail. She spent a short time in the hospital and then returned home under hospice care. At 5:30 in the morning of All Saints’ Day, November 1, the Saints came to bring Anne Davidson to her eternal home.