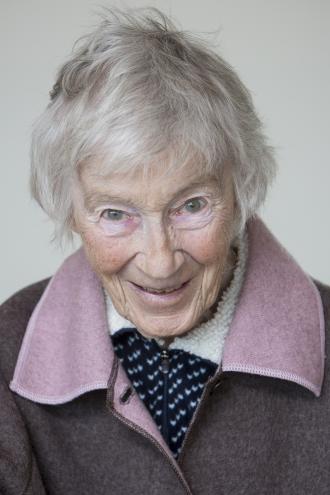 Sister Anne Leonard, RSCJ, was born on October 9, 1930, in Toronto, Ontario, Canada. She was a daughter of Norma Lilian Gray and Thomas D’Arcy Leonard, the third of five children. Anne began her education in Toronto with the Sisters of St. Joseph and spent the last two years of high school at the Sault au Recollet in Montreal, a school run by the Society of the Sacred Heart. Anne continued her post-secondary education at St. Michael’s College in Toronto.

In October 1952, Anne entered the Society of the Sacred Heart in Albany, New York, and made her first vows on May 19, 1955, the Feast of the Ascension. She then was sent to Montreal where she taught in the congregation’s elementary school for three years followed by two years in the Winnipeg school, prior to final profession in Rome on February 4, 1962.

Upon her return to Canada, Sister Leonard was sent to Vancouver where she was a much beloved teacher of English and where she became involved in debating. This was a time of great changes in the Society of the Sacred Heart following Vatican II. Between 1962 and 1982, Anne taught in Vancouver, Winnipeg, and Halifax.

In 1991, Anne was called to Rome to be the general archivist of the Society of the Sacred Heart. She remained there for eleven years, during which she began to modernize the archives by introducing a digital storage system. In Rome, she initiated gatherings of the many archivists of religious congregations in both English and French; these gatherings continue to this day.

Sister Anne Leonard was predeceased by her parents, her brother John (Jack) and her sister Kathleen. She is survived by her sisters Agatha Tawaststjerna and Stephanie Bonar and many nieces and nephews.

The funeral mass will be celebrated at St. Agnes Church on Mumford Road, Halifax, on Friday, September 4, at 10:00 a.m. Burial will take place at a later date.