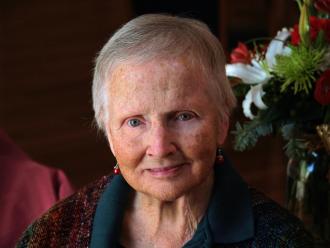 Religious of the Sacred Heart, Carol Bialock, RSCJ, died May 3, 2020, in Atherton, California.

Carol Bialock was born June 28, 1929, to Harry Louis Bialock and Julia Gammons Bialock in St. Louis, Missouri. One of three children, Carol enjoyed a close family life, in which her parent’s love for each other gave a feeling of security to their home. Her father’s tubular steel business required frequent moves for the family. During Carol’s early years, she lived in New Orleans, Pittsburgh, Washington, D.C., Atlanta, and St. Charles, Missouri.

When Carol was thirteen, her sister Ann was born. Five days after Ann’s birth, her mother suffered a cerebral hemorrhage from which she never regained consciousness. Her mother lived for another thirteen years and died when Carol was twenty-six. Her mother’s suffering for so many years was for Carol an occasion of momentary questioning the existence of God; but she then turned to religious faith, first to Presbyterianism when she was fourteen and then to Catholicism when she was fifteen. At that time, Carol was a student at the Academy of the Sacred Heart in St. Charles, Missouri; she was greatly influenced by the legacy of St. Philippine Duchesne. Carol’s daily contact with Philippine’s burial place—that “hallowed spot”—made a lasting impression on her. In fact, when Carol was confirmed, she added the name Duchesne to her first name.

After Carol graduated, she went on to Maryville College and was enrolled in the honors program her last two years. She greatly appreciated its emphasis on independent thought. Carol graduated from Maryville in 1949 with a degree in English. It was at Maryville that Carol discovered her vocation to the Society of the Sacred Heart. She entered at Kenwood in Albany, New York, on September 15, 1949, and pronounced her first vows on August 15, 1952. She made her final profession on February 9, 1959. Carol later went on to graduate studies, earning an M.A. in English from Saint Louis University and an M.A. in Pastoral Ministry from Seattle University.

Sister Bialock’s early years in the Society were devoted to teaching. Over the course of fifteen years, she taught at the Academy of the Sacred Heart in St. Charles, Missouri, and at City House in St. Louis. She also taught at Grand Coteau, Louisiana. In 1967, at a national liturgical conference, she met a priest “whose simple holiness rekindled in me the desire to be a missionary.” She asked to be sent to Chile, and for the next thirteen years, she did pastoral work there. She also was the secretary of Carlos González, the Bishop of Talca, who at that time was in the forefront of the renewal of the Chilean Church. She commented: “However, it was no one person in Chile who influenced me, but rather prolonged contact with the ‘people’—the poor—that taught me more than any number of textbooks on liberation theology could teach. One of the greatest gifts of my life was to be able to participate in the evolution of the Chilean Church during those critical years.”

During Sister Bialock’s last years in Chile, 1978-1981, she lived in Copiapó, a copper-mining town in the north on the edge of the Atacama desert. She was in charge of a large parish whose mission was to work to form Christian communities and encourage parish life in all its aspects. These years in Copiapó marked the beginning of a kind of mid-life conversion for Sister Bialock. “I grew up there, spiritually and psychologically.” She even thought that she would spend the rest of her life in Chile and became a Chilean citizen. In 1981, Sister Bialock was called to the motherhouse in Rome where she worked on the international communications team. She left Rome in 1985 and returned to her pastoral work in Copiapó with the Christian communities and to teaching English to impoverished children. She served at various times in the province of Chile in the areas of reflection, communication, and formation.  Sister Bialock’s deep love for the Chilean people remained with her throughout her life.

Sister Bialock returned to the U.S. in January 1987 and moved to St. Louis for eight months, living at the provincial house. She then moved to San Jose, California, where she worked as a caseworker at the Georges Travis Women’s Center and served on their board. She was on staff and lived at the Catholic Worker in San Jose, where she managed the house and served meals to the homeless. Sister Bialock also worked at the Network Empowering Women where she trained women to be facilitators for support groups, and at the Catholic Women’s Network where she started and facilitated support groups for women. Sister Bialock drove herself back to St. Louis from San Jose and lived at the Knapp St. Community in North St. Louis, where she taught at Holy Trinity Elementary School.  The next year she moved to Florida, where she worked for the Diocese of Venice as a Literacy Training Coordinator until 2001.

It is not clear when Sister Bialock started writing poetry. She certainly began in grade school; by the time of her death, she had developed into an accomplished poet with a large collection of published poetry. From early life, she also exhibited a strong mystical bent. By her own account, “A thirst for God has pursued me since my early teens, so I thirst for prayer and the symbolic side of life.” On the other hand, she admitted that she was not very practical. Often guided by intuition and feelings, an admitted “enthusiast,” she recognized that a search for balance in her life was an ongoing challenge. Another aspect of Sister Bialock’s life was her great affinity for making friends. “Getting to know a person and making friends was one of the richest gifts God gave me.”

In 2006, Sister Bialock went to Oakwood, the retirement community for the religious of the Sacred Heart in Atherton, California. There she named her ministry as “peacemaker” and entered joyfully into community life. Over the years, she came to know many students at Sacred Heart Schools, Atherton. A recent graduate of the school, who was Sister Bialock’s partner in the Sacred Heart Society, shared the following as she came to know Sister Bialock. “Sister Carol Bialock loved God, cracking jokes, Mary Oliver, and cookies in that order. The way she spoke about her education, about God, and about creation was like listening to someone write a love letter. Her adoration and understanding of the world were both inspirational and comforting. Above all, Sister Bialock was humble. With immense grace, she was a constant reflection of the goodness in the world.”

A highlight of Sister Bialock’s time at Oakwood was the celebration of her 90th birthday on Sunday, June 28, 2019. Her cousin Joan Grimm was able to republish one of the volumes of her poems, Coral Castles, originally published in 2013. The Oakwood community, family members, many friends, and lovers of poetry joined in a grand birthday party, at which Sister Bialock read selections from her book.

Shortly thereafter, her health declined noticeably, and from this past Easter, she was on oxygen twenty-four hours a day. By the end of April, she was starting to have periods of unconsciousness. Very peacefully in the morning of Sunday, May 3, she went home to God.

“The Best-Kept Secret,” is one of the poems included in Coral Castles.

The best-kept secret of them all:
Here is enough.
Now is plenty.

Waiting for something else is to scorn diamonds.
Running elsewhere is to cast off pearls.

A memorial Mass will be held at the Oakwood chapel at a later date.