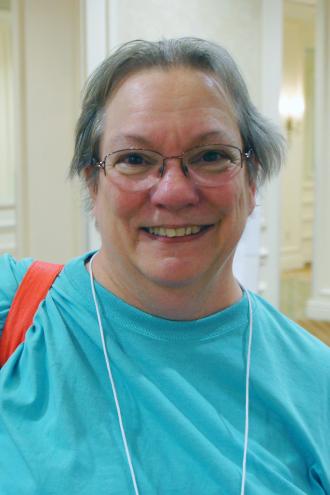 Religious of the Sacred Heart, Carol Burk, died May 19, 2019, in New Orleans, Louisiana.

Carol Margaret Burk, was born on December 25, 1942, into the large, close-knit family of Thompson Byrd Burk and Marjorie Lemarié Burk. A native of New Orleans, Carol was surrounded by the Society of the Sacred Heart her entire life. She was one of six children with five sisters and many cousins who attended Sacred Heart schools in New Orleans, just as her grandmother and great-grandmother had done.

Aware of her calling as early as kindergarten, Carol was not one to be influenced by others. Instead, she followed her own path. One incident occurred when she was still in primary school. A woman who had come to talk to the classes began going around the classroom, patting each child on the head and asking what she wanted to be when she grew up. Carol thought it shouldn’t matter to this woman; she remembered thinking that the only way out of this difficulty was to give a “wrong” answer, so she said she would be a ballerina, just like the girl next to her.

On August 15, 1961, Carol entered the Society of the Sacred Heart at Kenwood in Albany, New York. She made her first vows on April 25, 1964, after which she attended Maryville College of the Sacred Heart (now Maryville University). As a novice, she had made it clear that she was interested in, even determined on, going to Sweden. However, at the time, the Society did not have a ministry in Sweden. Instead, Carol continued her studies, graduating from Maryville College, then earning a graduate degree from Loyola University. She began ministry at the Academy of the Sacred Heart in St. Charles, Missouri, as surveillante of the primary school (dean of students) and teacher. After two years there, she spent one year at the Academy of the Sacred Heart in New Orleans before leaving for Rome to make her final profession in 1969.

Upon returning to the United States, Sister Burk also returned to teaching. During the next five years, she taught at Villa Duchesne in St. Louis, Lone Mountain in San Francisco, and the Academies of the Sacred Heart in Grand Coteau, Louisiana, and St. Charles, Missouri. While she was enjoying these positions, in 1974, she was given the opportunity that she had been waiting for: she was sent to Sweden.

Sister Burk referred to the eighteen years in Sweden as the best of her life. When she first arrived, she took classes to learn the language and to gain a teacher’s certificate for her new country. Upon receiving this qualification, she accepted the position of preschool teacher in Johannesgarden, in Göteborg. During her time there, she also worked as a catechist, retreat director, and treasurer.

In 1992, Sister Burk returned home to New Orleans for one year to care for her infirm mother. During this time, she worked in the parish, making home visits, leading a study group, and serving as catechist and teacher. After her mother died, she returned to Sweden where she began working as a caregiver for a family with whom she had remained in contact. In addition, she worked in the Sacred Heart ecumenical Ignatian retreat center, eventually leading retreats and giving spiritual direction. She also served as a hospital chaplain and in parish ministry, doing religious education, bible study, preparation for sacraments, and home visits.

In 2008, it was decided that the Society would leave Sweden. Her life in Sweden was very dear to Sister Burk; she had made life-long friends there, many of whom she kept in contact with over the years. When news of her sudden death was announced, messages about how she had touched their lives were received from friends including RSCJ. One former provincial stated, “All the sisters in the former German-Swedish part of our province shall remember Carol as a friendly, open, lovable person with a big heart and a wonderful sense for everything that is our Lord’s business.”

When she returned to New Orleans, Sister Burk enjoyed an active retirement, volunteering at the Academy of the Sacred Heart (The Rosary) and another school. She enjoyed teaching the students origami and knitting. One Religious of the Sacred Heart has fond memories of bonding with Carol over knitting, remembering how good Carol was to her in her early years in the Society.

Carol believed that it is the little acts that truly show the character of the Society. Showing people that you care and brightening their days are the things she believed to be most important. As she said, “They can be ordinary, regular people. You don’t have to try to get information or explain yourself; just talk to them or do something that would be helpful to them in the moment... that’s all the Sacred Heart is.” There was the time she met a homeless man on a streetcar in New Orleans. After listening to his story, she offered to buy him lunch, at which point he put his head on her shoulder and cried, asking why she was doing this. Carol answered, saying because you are a vet, a brother, and a man who needs to eat lunch. Carol ate with this man and the whole time he held her hand. Before they parted ways, the man told Carol that this meal he shared with her helped him to believe that God was watching over him. Carol felt blessed by the experience. “These are the people of my city, the ones I am sent to, just as much as the others I meet.”

In her later years, Carol suffered from heart trouble, for which she had surgery. She was recently cleared by her cardiologist to travel to California where she was to have a second heart surgery. On May 19, 2019, before departing for California, Carol was taken to the hospital after experiencing shortness of breath and chest pains. She suffered several cardiac episodes while in the hospital and could not be revived.

To the family of Carol Burk.