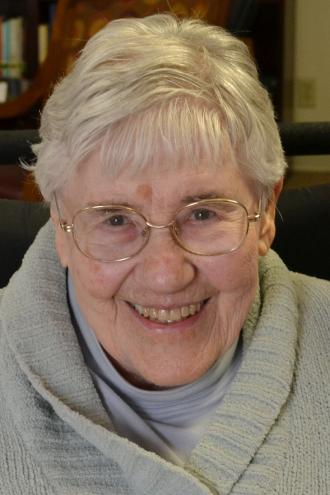 Catherine Roche was born in Salt Lake City, Utah, on November 27, 1922, to Maurice Augustine Roche and Marie Joanna Osborne. Her mother died when she was only three years old, leaving Catherine and her two brothers. After her mother died, Catherine was placed in the care of her paternal grandmother, whom she grew to love very much. Mr. Roche remarried and moved his family to Flin Flon, Manitoba, Canada, where he was superintendent of a mine. The family increased by one more boy and three girls, whom Catherine often took care of.

Catherine reported that Flin Flon was very cold in winter; however, she loved the quiet, the beauty, and the opportunity to ice skate. Her father even built a rink on a lake. She enjoyed her one-room schoolhouse, especially the mix of students from different European countries. Few Canadians wanted to work in a mining town so far north in such freezing conditions, so men came from various European countries to earn enough money to support their families.

As Catherine grew up, her love of music grew as well. She had a great gift for singing and playing the piano and organ. After receiving a B.A. in English at the University of Manitoba, Winnipeg, in 1944, she reported that she felt a call to religious life. Her parish had been staffed by priests from the Order of Mary Immaculate, a French-based group with a strong devotion to the Sacred Heart. She recalled a large picture of the Sacred Heart in her parish church and the priests who preached continually on this devotion. Then, during her college years, she learned of the arrival in Winnipeg of some cloistered nuns belonging to the Society of the Sacred Heart.

After graduation, Catherine moved for a year to Toronto to assist her oldest brother, Maurice, who was blind. Maurice was a chemical engineer, as well as a musician. Catherine dedicated this time helping him transcribe chemistry notes into braille with a braille typewriter. She even helped him put a Beethoven sonata into braille. During this time, at the suggestion of a Jesuit during a retreat, she visited Montreal, where she met Reverend Mother Bertha Padberg, who, in turn, accepted her into the Society of the Sacred Heart.
On July 2, 1946, Catherine entered the Society at Kenwood, in Albany, New York, and pronounced first vows on July 2, 1948. As a young religious, she taught a variety of classes and subject matter on many levels. Students still remember her as a great teacher in whatever subject. Catherine was always very creative. Eight years after entering, in 1956, she went to Rome with other RSCJ from around the world to prepare to make her final Vows on February 10, 1956, with the name: “Foi dans l’amour” with the devise: “My heart is yours, take from it all you need.”

After teaching at the elementary and secondary school levels, in the mid-60s, Catherine went on for further studies and received a B.F.A. in Music and Sacred Music at Manhattanville College, New York, especially loving her work at the Pius X School of Liturgical Music. This was later followed by an M.A. in Education at the University of San Francisco in 1978. In time, she pursued doctoral studies in music at the University of Indiana, Music Education at Holy Names University, Oakland, and eventually received her Ed.D in Music Education at the University of the Pacific in Stockton, California, in 1995. She completed the degree while teaching, lecturing, serving as music specialist, arts education specialist, intern supervisor and graduate assistant in academic settings; choir director, church music director, chorister on European tours, piano instructor, teacher of voice, harp, guitar, music theory and history, accompanist, and on and on the list goes.

At one moment in Montreal, Catherine went for film testing, for she had always loved drama. Then, one day, she was engaged by the Canadian National Film Board to co-star in a film entitled The Company of Strangers, renamed Strangers in Good Company in the USA, an award-winning feature-length drama aired on National Public Television, USA. As a result, she received an award for Excellence in Acting at the Canada Film Festival in 1990 and was nominated for Best Actress in a Supporting Role by the Canadian Academy of Cinema and Television in 1991. Later, describing her experience, Catherine said, “There was no script. The director simply told the actresses the theme of each scene; from there they were on their own!” One can imagine how Catherine’s creative energies flowed.

While in Stockton, Catherine worked in a parish. She not only trained high school students to sing at Mass, but involved herself in transporting them to and from church to insure their attendance. Catherine lived in many types of environments, and, although she seldom lived in community with her sisters, she would drive from Stockton to San Francisco, stay with the 17th Avenue community, and then return to her ministry.

Gradually Catherine’s eyesight began to fail because of macular degeneration, so she was no longer able to drive and to get to Mass. The Canadian Province recommended that she go to its retirement facility in Halifax, Nova Scotia; however, since Catherine had two brothers in Napa, California, as well as other family members living nearby, she asked to go to Oakwood, the U.S. west coast retirement center for the Religious of the Sacred Heart. The year was 2005. Because Catherine had lived alone for so many years, she had accumulated many things, sent by family and friends. So, her move was more than a drama. Leaving a five-bedroom house in Stockton for a small bedroom at Oakwood was an enormous chore. Among her giveaways was her baby grand piano, which went to a nephew.

Catherine’s first years at Oakwood were difficult, since she knew so few people, and her poor eyesight made it challenging to walk. However, she was a good sport, and, in time, to her great joy, she was able to attend her favorite operas in San Jose on a regular basis. The greatest problem was finding a driver and keeping track of her ticket!

In the course of time, Catherine had to use a wheel chair, which she managed in a unique way. Using a cane to help her push and pull forward, she used her feet to travel with amazing speed to her destination. She was also a study as she daily read the New York Times with her magnifying glass! But, most important, Catherine was a faithful, caring Religious of the Sacred Heart, a woman of prayer, with a huge loyalty to her Irish heritage. Her Irish eyes smiled with any mention of the old sod. During Easter week one year, she heard the community singing “Now the Green Blade Rises,” whereupon she pushed her wheelchair to the organist to ask, “Why did they sing that? ‘Noël Nouvelet’ is a Christmas carol.” Catherine had a point. The melody of a Christmas carol, however, had been adapted to the Easter season.

Little by little, Catherine’s health declined, and she entered hospice care. The end came very peacefully the evening of January 14, 2019, only a few hours after the community began a vigil at her side. Now she has joined the choirs of angels!

Catherine is survived by her brother, Robert Roche (Carol) of Napa, California, her sister, Elizabeth Proctor, of Airdrie, Alberta, Canada, many nieces and nephews across the U.S. and Canada, and her Sisters in the Society of the Sacred Heart.

Wed, 2019-01-23 05:53
<p>&nbsp;Dear Mother Roche, how I remember well our lessons and choirs at Sacred Heart in Montreal. &nbsp;What a beautiful life you have lived. &nbsp;You were an inspiration all your life, &nbsp;Letizia</p>

Tue, 2019-02-05 11:08
<p>On behalf of the family of the late Alice Diabo, I would like to offer condolences on the passing of Catherine Roche. My grandmother Alice was a co-star with Catherine in the Company of Strangers. It was a special time for all the ladies in the movie and my grandmother spoke highly of Catherine. She will be missed by all who loved her but will always be alive in their hearts...and on film. - Joe Delaronde, Kahnawake, Quebec, Canada.</p> <p>&nbsp;</p>