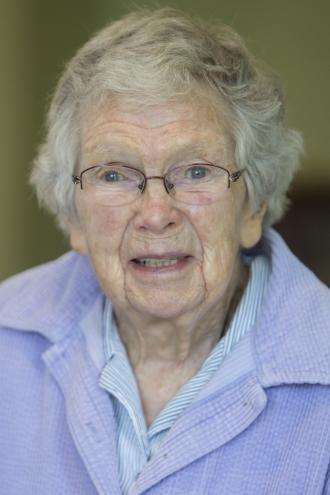 Eleanor Carr, affectionately known as “Elly” was born in Brooklyn, New York on October 13, 1922, to Edward Q. Carr and Mary Mulqueen Carr. Her mother’s only sister was a Religious of the Sacred Heart, Mother Eleanor Mulqueen. Elly was one of five children; she had two older brothers and two younger sisters, with whom she shared “a very happy” childhood. In 1944, she graduated from Manhattanville College of the Sacred Heart in New York, where she earned a BA in Fine Arts and English. At one point during the five years that followed, she entered the Society of the Sacred Heart; but after a few months, “overwhelmed with homesickness,” she returned home. She worked for a publishing company and taught for a time, but her call to religious life persisted. She re-entered the Society of the Sacred Heart at Kenwood, Albany, New York, on the Feast of the Sacred Heart, June 1949. She made her first vows there in 1952 and final profession in Rome in 1957.

A religious for sixty-seven years, Sister Carr spent most of her life in the eastern United States, teaching on the secondary level at our schools in Albany and Greenwich, Connecticut, until 1964 when she moved to Manhattanville College, Purchase, New York. She received her PhD at New York University’s Institute of Fine Arts in 1969. At Manhattanville, she was professor of Art History and taught in the Master’s in Humanities Program. She also chaired the Department of Art History for over twenty years, and her love of art history continued throughout her ministerial career. After she left Manhattanville in 1987, she taught art history at the Convent of the Sacred Heart, 91st Street in New York, and evening classes at the 92nd Street Y. Until 2002, she was adjunct professor of Art History at Fordham University Lincoln Center’s, “College at Sixty” program, in which she taught retired senior citizens. Combined with this work, she gave slide lectures on art history to students preparing for their high school equivalency, combining lectures with trips to the Metropolitan Museum. She found working with these students particularly rewarding.

Sister Carr had a particular interest in Celtic (Irish) art resulting from her discovery of Celtic Christianity and her own ancestry. She visited Ireland in the nineties and was especially taken with the High Crosses of the ninth to the twelfth century. This experience contributed to her course planning and her own spiritual life. She lectured widely on the ancient Irish crosses; and in 1997, the art history department at Manhattanville invited her to give the Berger Lecture to share her work.

Her later years found Sister Carr continuing to teach part-time at Fordham and being responsible for hospitality in her community at 80th Street in New York City, host to numerous guests throughout the years. She retired from teaching at age eighty and, in 2011, moved to Avila in Albany, where she was known and loved throughout the larger community for her gentle spirit. In her notes she writes, “. . . increased awareness of the sufferings in the world today has moved me deeply. I am grateful to a loving God . . . and pray that I may use the remaining time here to ‘let go’ in order to bring [God’s] love to others.” Her move to Teresian House late in 2018 was that final letting go, and her longing for God was satisfied when she died peacefully on April 25, 2019.

Funeral services for Sister Carr will be held on Thursday, May 2, 2019, at 11:30 a.m. in the Teresian House chapel, followed by burial in the Kenwood cemetery.

A teacher who inspired my art

Wed, 2019-05-01 19:45
<p class="MsoNormal">&nbsp;</p> <p class="MsoNormal"><span style="font-size: 12.0pt; line-height: 115%; font-family: 'Arial','sans-serif';" data-mce-mark="1">Sr. Carr was my preceptorial advisor at Manhattanville College.&nbsp; I first learned about art history in her class "Learning to Look."&nbsp; The principles she taught opened up art to me.&nbsp; So significant was her impact that it provided a foundation for a photographic collection I created for the National Park Service that artistically documents the home, studio and property of American Impressionist painter Julian Alden Weir -- now known as Weir Farm National Historic Site in Wilton/Ridgefield, Connecticut, and to be commemorated on the US quarter in 2020.</span></p> <p class="MsoNormal"><span style="font-size: 12.0pt; line-height: 115%; font-family: 'Arial','sans-serif';" data-mce-mark="1">&nbsp; </span></p> <p class="MsoNormal"><span style="font-size: 12.0pt; line-height: 115%; font-family: 'Arial','sans-serif';" data-mce-mark="1">Those photographs will appear in a book I authored for Arcadia Publishing -- titled "Weir Farm National Historic Site" -- that will be released on June 3, 2019 with a foreword written by Senator Joe Lieberman.<span style="mso-spacerun: yes;" data-mce-mark="1">&nbsp; </span>Although I lost contact with her, I was proud to include Sr. Carr in the Acknowledgments page of my book.</span></p> <p class="MsoNormal">&nbsp;</p> <p class="MsoNormal"><span style="font-size: 12.0pt; line-height: 115%; font-family: 'Arial','sans-serif';">So I am saddened that she passed away (on my birthday) and that I will not have the opportunity to present her with a copy of the book.&nbsp; I am pleased, however, that she lives on in the sense that I am teaching others what I learned from her.&nbsp; I present a series of workshops for the National Park Service called "The Art of Phoneography" wherein I teach amateurs to professionals how to use their smartphones to create better photographs -- not through the use of fancy equipment or effects, but just by "learning to look."</span></p>

Thu, 2019-05-02 21:51
<p>Hello Xiomaro, &nbsp;Thank you for telling me about your photograph book coming out on my birthday, June 3, 2019. &nbsp;I am a graduate of Manhattanville and will celebrate my 50th reunion this June. &nbsp;I would love to know more about your work at Weir Farm and your work with the Park Service and your teaching with the smartphone. &nbsp;I am the photography chair of the Litchfield Garden Club. &nbsp;We need a smart phone lecture in the near future. &nbsp;I have taken our committee on field trips to Weir Farm and put together my own slide show of the farm. &nbsp;Thank you Catherine</p>

Thank you for your interest

Thu, 2019-05-16 19:15
<p>Thank you for your interest Catherine.&nbsp; Small world.&nbsp; I think Sr. Carr would have been pleased to know that we got connected via our acknowledgement of her impact on our lives.&nbsp; I am happy to respond to your inquiry in more detail.&nbsp; Please send me a message via my website at http://www.xiomaro.com. In the meantime, I think I might have found your email address online and will send you a message as well.&nbsp; I would love to present the artistic concepts I learned from Sr. Carr with your group.</p>

Thu, 2019-06-06 08:01
<p>Sister Carr taught my first Art History class at Manhattanville and opened up a world to me that I grew to love.&nbsp; Art History became a very important part of my life and career and remains so today.&nbsp; When I studied abroad in Paris, she checked in from time to time to ask about my classes and my experiences.&nbsp; She brought a genuine love and enthusiasm to her teaching that was palpable, and I am grateful to this day for everything she brought to my life.&nbsp; I have never forgotten her.&nbsp;&nbsp;</p>

Thu, 2019-08-22 14:14
<p>my Mother waa Margaret Corcoran Re class of 40 from sacred heart then went in to manhattanville Witth “Ellie” &nbsp;they were the dearest of friends untill my mothers passing last April. Sr Carr will always be loved and so thankful she was part of out lives ❤️</p>