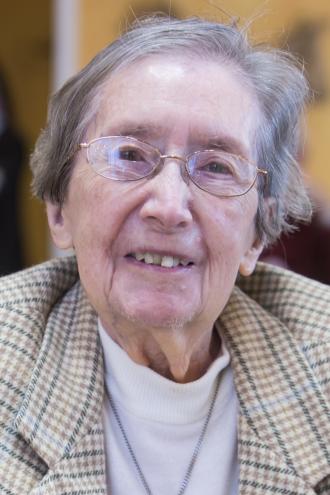 Gertrude Cosenke was born on February 23, 1917, in Albany, New York, to Stephen Cosenke and Mary Fleming Cosenke. She was the oldest of five, but two of her siblings died early in life. One brother died as an infant at the age of two weeks, and then her sister Mary died at age seven. “The rest of us grew up.”

Gertrude realized that she had a religious vocation when she was in high school. She was taught by the Franciscans, and her aunt was a member of the order. Gertrude wanted to go to college, but it was not possible for her family financially. A friend was working at Kenwood, so she decided to work there too. Gertrude began working at Kenwood in October 1934 for four months. Her connection with the RSCJ was not a new one. While in high school, Gertrude had made two or three retreats at Kenwood and had attended the Corpus Christi processions that took place there. She said the spirituality of the RSCJ drew her to them. She entered the Society of the Sacred Heart on February 7, 1935. She pronounced her first vows as a coadjutrix sister in 1937 and made her final profession at Kenwood in Albany, New York, on February 11, 1944.

Sister Cosenke was a cook in houses of the Society for over thirty years. She served in Rochester, Providence, and Detroit, sixteen years at Grosse Pointe, and then five years at Bloomfield Hills. After many years of service to the Society in this way, she was allowed to pursue her dream of studies because of changes Vatican II brought about. Gertrude began by taking individual college courses when she lived in Detroit, Washington, D.C., and Albany. She finally asked Sister Coakley, the provincial, if she could study full time. Her request granted, she attended Maria College, earning an associate’s degree in 1974. She went on to Barat College in Lake Forest, Illinois, and earned a BA in Religious Studies and English in 1976. Sister Cosenke volunteered in religious education in Albany and started working for the diocese in 1977 as the coordinator of religious education and parish ministry at Our Lady Help of Christians Parish. She remained in this position for twenty-five years. She also lived at Sursum Corda, a housing project in Washington, D.C., where she learned about the life of marginalized people. She served as a social worker in the African-American community for four years.

Which one of her ministries did she like best? “At the time I was happy in all of them. I worked in the parish where I grew up and made my First Communion. I became the director of the CCD program. Being in the inner city was a wonderful background for religious studies.” After Vatican II, she also enjoyed being able to go out and be with people. In addition, her return to Albany allowed her to be near her family.

Gertrude said, “I hope we can carry on Saint Madeleine Sophie’s charism, making known the [love of the] Heart of Jesus.” She believed that the Associates have an important role in this mission: “We can't get along without the laity. The beautiful lives of these parishioners are a source of inspiration for me.”

In 2007, Sister Cosenke moved to the Teresian House community and enjoyed a number of happy years there. She said that the motto given her group at probation: “I live now no longer I, but Christ lives in me” was her favorite scripture passage. Some months ago the little group of RSCJ at Teresian House were talking together about death. When Gertude, at age 102, was asked what she thought, she said death never entered her mind. She simply lived each day, each moment as it came. Even during the last days of her life, that is precisely what she did.