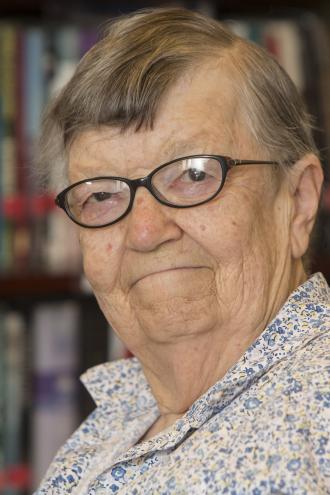 Hilda Carey was born on July 9, 1928, in Portsmouth, New Hampshire. She was the daughter of Graham Carey and Elisabeth Foster Millet Carey, of Sunrise Farm in Benson, Vermont. Her father was an architect, a philosopher, a dairy farmer, a kind of renaissance man who greatly influenced his youngest child. Her mother belonged to one of the oldest New England families.

Sister Carey taught high school English for eighteen years in various Sacred Heart schools in New York, Connecticut, and Michigan. She had a particular love for Korea and Japan where she also spent many years teaching. Beginning in 1972, she was Professor of English at the Sacred Heart College for Women, Chun Cheon and Pucheon, Korea. During these years, she also taught freshman and sophomore English at the University of Maryland, University College, Youngsan Campus, Seoul, Korea. In 1981, Sister Carey returned to New York and worked at Green Hope Services for Women located in East Harlem, where she helped formerly incarcerated women prepare for the GED. In addition to this work, she also taught high school English and served as academic coordinator and guidance counselor at the Convent of the Sacred Heart, 91st Street, in New York City. Over the next four years, Sister Carey taught high school English and theology at Stuart Country Day School in Princeton, New Jersey, and later at Newton Country Day School in Newton, Massachusetts.

In 1986, she began teaching freshman English at Boston College, and continued in the same position until well into her eighties. Sister Carey had a particular love for the poetry of Emily Dickinson. In her teaching, she used novels from all over the world as a way of getting her students to explore the challenges of the human condition. For her, there was never any separation between literature and the deepest and most urgent concerns of our lives; and her students depended on her for guidance that went far beyond their studies. To everyone, she brought the same qualities of loving openness and total honesty.

Many years after her school days a former student wrote in an autobiographical paragraph, “I learned from Mother Carey how important it was to know how to give someone your undivided attention. She taught me by giving me hers when I came in to grouse about whatever was bothering me. She closed every book on her desk, called down to tell reception to hold her calls, turned away from her desk and focused only on my problem.” That kind of undivided attention was her gift to anyone she met in her long life, wherever she was.

When Sister Carey applied to the Princeton University Center for Continuing Education, the writer of her letter of recommendation described her as a remarkably gifted educator, one who had “a knack for turning young people on to things intellectual, especially in the literary field.” Sister Carey could share her knowledge in a variety of contexts, at the college and university levels in Korea and Japan and with ex-offenders in East Harlem. When asked, she said that her interests had pretty much remained the same throughout her life, love of literature, education and people.

In 2015, when she was no longer able to teach, Sister Carey moved to the Abba Community then, the following year, to Teresian House, both in Albany, New York. It was in those years that the fruit of her contemplative life became most apparent in the occasional profound observations she shared with those who visited her and in the open arms and welcoming smile she offered to everyone who approached her.

10 days after a wonderful visit by her brother John and his family from Ireland, Hilda died peacefully on the morning of September 16, 2019.

A memorial Mass for Sister Carey will be celebrated at 1 p.m. on Monday, September 30, 2019, in the Infant of Prague Chapel at Teresian House. All are welcome.

Wed, 2019-09-18 16:11
<p>Hilda was a colleague of mine for a couple of years in Upper School English at 91st Street. She had such a good heart and was always kind and generous. &nbsp;She came all the way from NYC to Westchester County to my wedding many years ago, even bringing a scarf she had knitted herself as a gift. God bless her memory, for she was filled with faith and kindness. May she rest in peace and rise in glory.</p>

Fri, 2019-09-27 15:39
<p>Although I didn't know Hilda as well as some of my sisters whom she taught at both Noroton-on-the-Sound and Kenwood, she was always a pleasant, quiet lady and a good listener. My mother, her sister, would do all the talking; she would just sit there, sometimes knitting, and take it all in. A peaceful lady, never confrontive. Fond memories.</p>

Sun, 2019-09-29 19:50
<p>&nbsp;I was born four months before Hilda entered the convent in 1952, and she has always been a gentle presence in my life.I cried as soon as I saw Hilda's wonderful smile in this obituary.&nbsp; I will miss her most dreadfully.&nbsp; Four years ago Hilda was holding my hand as I held my mother's (her sister,Joan) when Mummy left this life for the next. During the days surrounding my mother's death Hilda and I had a chance to catch up, for which I am truly thankful. Life's circumstances had meant we hadn't seen much of each other over the years. I was at Noroton when she was Mistress of Studies.&nbsp; I remember well the great degree of respect the students had for her; they werer a bit in awe of her, in fact. My freshman year was difficult, being away from home for the first time.&nbsp; I was so thankful that "Mother Carey" was there for me in every way.&nbsp; Truly the best of souls, she was always genuinely interested in the lives of others.&nbsp; Every year for many years she knitted all of her nieces and nephews, brothers and sisters wonderful socks and gave them to us as Christmas gifts.&nbsp; My own three sons are the proud owners of "Hilda socks"as well.&nbsp; Some were extra special, bees knitted in for my beekeeper sister, cross country skier for me, etc. They were marvelous, and mine were darned repeatedly as they wore out!</p> <p>I loved the story above relating how she put everything away and instructed that calls be held in order to give a student her undivided attention.&nbsp; That is who she was. I can't imagine my world without her.&nbsp;</p> <p>I believe my great love for literature and anything relating to communicating with words was fostered by Hilda. Genetics played a part for both of us as well, surely! I hope I have some of her other delightful qualities woven within me as well.&nbsp;</p>

Mon, 2019-09-30 12:21
<p>I worked with Hilda for many years at Boston College. She was a beloved friend and colleague. We had many wonderful discussions about literature, our students, the work we were doing to make them more aware and able to parse not just layered texts but complex ideas. I never knew anyone I've worked with to be so dedicated. She came early every morning to read student work and plan her lessons, and left late. This was daily, for years. I would occasionally overhear her conversations with students when our doors were open (our offices were adjacent in Carney Hall) and was moved by her generosity and care. She took each question seriously and not once did I know her to make a student feel unintelligent or naive--she truly conveyed a genuine interest in their discourse. She met them where they were. I learned so much from Hilda about how to be a better, more empathetic teacher. She was a gem. I miss her very much.</p>