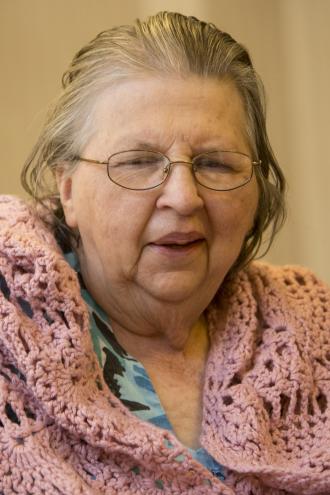 Irene Packer was born on April 15, 1931, in Bridgeport, Connecticut, to John Anton Packer and Rose Veronica Creevey. Irene was one of four children; she recalled the house she grew up in as a “lovely home” with a large backyard and a four-seated swing. The neighborhood held a mix of people where she and her siblings whiled away hours at the neighborhood pond, close to their house. When Irene was eight, her mother and father separated. Her mother moved with the children to a six-family house, a mile and a half from their home. On Sundays, she would walk three miles with her mother after Mass to her grandmother’s home. These times were hard for Irene and she remembered feeling so alone. From the age of nine, until she was sixteen, she had a paper route, and then started working in a clothing store. After she graduated from high school, she started working at Bullard Machine Tool Company tracking inventory of machine parts. While she was at Bullard, two co-workers asked her if she had thought about religious life. Irene was known to visit the church where she worked, even at night. An RSCJ she met on a trip to Noroton also inquired if she had considered religious life. This RSCJ even offered to write a letter for Irene requesting permission to enter and said, “All you have to do is copy it.” Irene followed her advice. At first, Irene had considered entering Maryknoll; but when she learned of the missionary work that involved traveling and foreign languages, she decided against it and instead entered the Society of the Sacred Heart, at Newton, Massachusetts, in 1955.

Irene served in many places and in various capacities in the Society. She worked in the kitchens and laundries and parlors at Manhattanville, Noroton, and Newton. The ministry she loved the most was working in the library at the Red Cloud Indian School at Pine Ridge, South Dakota. She spent eight years at the school. Irene earned a B.A. in Elementary Education from Maryville. She also spent some time in Seattle, Washington, attending the Institute for Theological Studies at Seattle University, where she completed the course, Scripture and Leadership Training (SALT).

In 2011, Irene moved to the Teresian House community in Albany, New York. She believed that her move to Teresian House enriched her religious life with many opportunities to talk to others about her life and love of God. Irene spent time in prayer, along with an occasional game of bingo! She said, that the bingo “prize for her floor was fifty cents, but on the higher floors you can win more. The closer you get to Heaven, the bigger the “pot!” As it should be!”

On October 16, 2019, Irene passed gently into the arms of her heavenly Father.  Irene's survivors are John and James Packer, James DiVivo and Carol Tintanelli.

A funeral mass for Sister Packer will be held on Tuesday, October 22 at 1:00 p.m. in the Infant of Prague Chapel at Teresian House.

Sun, 2019-10-20 15:18
<p>i did not know Sr. Packer, but was immensely moved when I read the story of her life. What hard work! What efforts! What variety in her life as an RSCJ! Hers is really &nbsp;a true American story of hard work, devotion to community, &nbsp;fidelity to God. &nbsp;I wish I had known her, and am both touched and proud of her life story. &nbsp;My sympathy to her family and to her fellow RSCJ. May she rest In peace and rise in glory.</p>