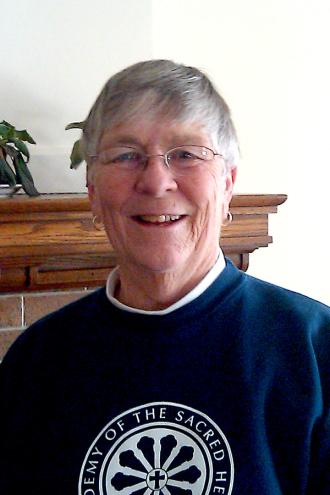 A religious for forty-eight years, Joan first entered religious life as a Sister of Mercy. In 1971, she transferred her vows to the Society of the Sacred Heart. In 1977 she made her first vows as a Religious of the Sacred Heart in Boston, and final profession in 1981 in Assisi, Italy.

Joan earned a B.A. in Education from St. Joseph College in West Hartford, Connecticut, in 1964. She went on to graduate studies at Boston College, earning a MEd in Guidance and Counseling in 1968 and an M.S.A. in Administration from the University of Notre Dame in 1978.

In her early years as a religious, Joan was a high school counselor at Newton Country Day School in Newton, Massachusetts. Later she directed a communications laboratory for middle school students at Stone Ridge School of the Sacred Heart in Maryland. For the next nine years, Joan was head of middle schools at Stuart Country Day School of the Sacred Heart in Princeton, New Jersey, and at Duchesne Academy in Houston, Texas.

Sister Inglis later served for nine years in Albany, New York, as administrator of Kenwood, a facility caring for the aged and infirm religious of the Sacred Heart. She was a trustee of the retirement centers both in Albany and in St. Charles, Missouri.

In 1992, Joan began a ministry that integrated her lifelong dedication to education, health and working with the elderly poor. In later years, she and Sister Natalie Runfola resided at St. Francis of Assisi Church in Albany's South End. Together they touched deeply the lives of many people in the surrounding community. Among Joan’s activities were helping undocumented people seeking asylum and tutoring disadvantaged children in a nearby public school.

For several years, Joan struggled with a variety of cancers. When diagnosed with leukemia in 2017, she was forced to discontinue her active ministries. During this time, she was blessed with the strong support of sisters in her religious community, along with many friends in her parish and neighborhood.

Sister Inglis is survived by her sisters in the Society of the Sacred Heart and her brother, Wallace, a Hawaii resident. She is predeceased by her sister Anita, whose husband, Patrick Drewry, and their nine children reside in Waterbury and surrounding Connecticut communities. She was also beloved by two generations of nieces and nephews.

A funeral mass will be celebrated on Saturday, May 11, at St. Francis of Assisi Parish in Albany New York.