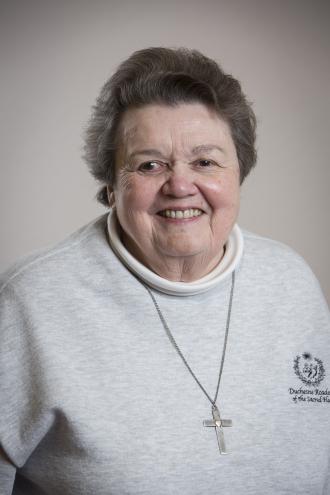 Religious of the Sacred Heart, Josephine (JoEllen) Sumpter, died November 16, 2021, in Atherton, California. She was eighty-one years old and a member of the Society of the Sacred Heart for fifty-eight years. JoEllen was born on September 13, 1940, in Omaha, Nebraska, the only child of Charles Edward Sumpter and Helen Graffius Sumpter. Prior to entering the Society of the Sacred Heart, JoEllen worked as a lab technician and was head of the pathology department at St. Joseph Hospital in Omaha. She also was the owner, operator, and teacher for five years at JC Dance Studio. JoEllen graduated from Duchesne College in 1962 where she earned a B.A. in Biology. Following graduation from Duchesne, she entered the Society of the Sacred Heart on September 8, 1963, at Kenwood for the first part of her novitiate, with the second part at the international novitiate in Frascati, Italy, where she made her first vows in 1966.

After first vows, Sister Sumpter taught at Duchesne Academy of the Sacred Heart in Omaha, Nebraska. From 1968-1971, she taught biology at Woodlands Academy of the Sacred Heart, and in 1971 became the assistant principal there. During this time, she earned an M.A. in Biology from Creighton University, graduating in 1971. After her time at Woodlands, she left for probation in Rome.  She returned to Omaha after probation in 1972 and decided to make her final profession on February 4, 1972, at Woodlands Academy where she could share the experience with the province, her parents, and friends on the North Shore.

Sister Sumpter spent the next nineteen years at Woodlands, serving in a number of capacities, as the assistant to the curriculum director, boarding staff and teacher, chair of the fine arts department, and director of the boarding school. She also earned an M.A. in Dance Education at Northwestern University in 1975. After a one-year sabbatical in 1992, Sister Sumpter was assigned to Duchesne Academy of the Sacred Heart in Omaha and served as director of services and fine arts for three years, registrar for ten years, and school secretary and registrar until 2007. From 2007 to 2016, she was assistant dean of students and then assistant to the administrative team at Duchesne.

Sister Sumpter also served the province as the Area Director in Omaha for a number of years.  Some of the gifts and qualities her Sisters attributed to her were her ability to listen well without judgment, organizational skills, good insights, creativity, and her spirit of fun.

Sister Sumpter served most of her life in Omaha and loved the Society’s ministry there. In 2016, she retired to Oakwood, the retirement community for the Religious of the Sacred Heart.

On November 16, 2021, Sister Sumpter, peacefully went to God. Her friend, Lucy Hayes, was by her side, along with Sisters Sally Rude and Sis Flynn.