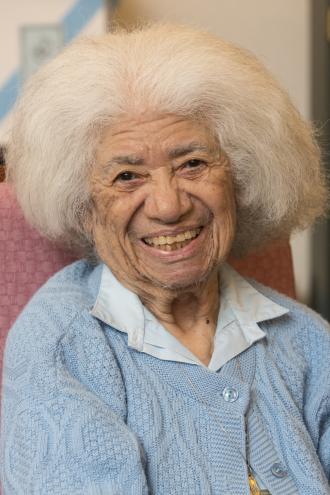 Juana Resto, RSCJ, was born in 1928 to Regino Resto and Marcelina Diaz Resto in Puerto Rico.

She entered the Society of the Sacred Heart in 1955 in San Diego, California, and made her first vows as a coadjutrix sister (non-teaching religious) in 1957. She served in various support roles in Sacred Heart schools in Chicago and Omaha. During her early years in the Society, Juana was a cook at Woodlands Academy, Lake forest, Illinois, in both the school and the community. Later, she worked in pastoral ministry in the emergency department at Boston City Hospital, where she was highly valued. Over the years, she suffered with pancreatitis, for which she was hospitalized on a few occasions. While a patient at Boston City Hospital, Sister Resto, by her own account, was not charged for her care because of how her work there was appreciated.

Remembered for her kind and generous spirit, Sister Resto, greatly appreciated by the Latino community, served for a number of years in the Hispanic apostolate in Boston. Known as the “Mother Teresa” of the South End for her pastoral work, Sister Resto endeared herself to numerous families, and was present for baptisms, confirmations, first communions, weddings, births and deaths. She helped translate for Spanish-speaking people at their doctors’ appointments and at-home and hospital visits. Sister Resto also served in Eucharistic ministry at Holy Cross Cathedral, Boston, and assisted at the Blackstone Elementary School in Boston. The people she served and the RSCJ in Boston loved her.

In 2005, Sister Resto moved to Kenwood where she served as sacristan, and, in November 2008, was one of the founders at Abba House in Albany, where as sous chef she helped to prepare the first Thanksgiving meal for the community. However, by the end of that year it was clear that she needed to move to Teresian House to begin her ministry of prayer there. Families from Boston’s South End would drive to Albany to see her. Her move to Teresian House allowed her time for her creative pursuits. She was quite skilled at numerous crafts, crocheting, knitting, and painting among them, and was often a favorite of volunteers and the families of other residents, as she would make them little gifts. One of her Sacred Heart sisters likened her to “a lily of the valley: precious to those who could find her but hidden from most eyes.”

Over the past few weeks, Sister Resto’s health declined; and on May 15, 2020, she went peacefully to God. She was buried in the Kenwood Cemetery. Sister Resto is survived by a very loving family of nieces and nephews in Puerto Rico and her sisters in the Society of the Sacred Heart.