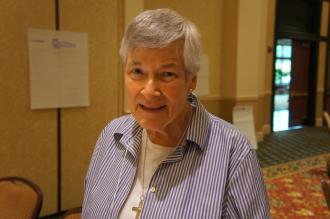 Sister Olson taught at Sacred Heart schools in Grosse Pointe and Bloomfield Hills in Michigan. She also taught at the Academy of the Sacred Heart in Rochester, New York. She was in charge of finances, building management, and purchasing at Convents of the Sacred Heart, Greenwich, and Noroton, Connecticut. She was also assistant head of middle school at Greenwich. Sister Olson was a middle school teacher at Stone Ridge School of the Sacred Heart in Bethesda, Maryland. She also taught and served as head of the lower school at Stuart Country Day School in Princeton, New Jersey. From 1986 until 1990, Sister Olson was the principal at Oak Hill School in St. Louis, Missouri. She then had a one-year sabbatical, during which she went to Paris and Rome before a program in Biblical Studies in the Holy Land. This experience marked her life not only in terms of her faith but also by offering her a deep understanding of cultural differences. She returned to Stone Ridge in 1991 to teach and serve as a campus minister for the next ten years. In 2001, Sister Olson moved to Sprout Creek Farm in Poughkeepsie, New York, to serve as the business manager. Following her time at Sprout Creek, she returned to Stone Ridge in 2004 and remained there for the next ten years serving as admissions director for the middle and lower school and as campus minister and director of mission and ministry. When Sister Olson retired from Stone Ridge in 2014, she was appointed to the Board of Trustees of the school.

In 2014, Sister Olson wrote a biography of Saint Philippine for middle school students entitled Saint Rose Philippine Duchesne: A Dream Come True. Her different roles at Stone Ridge offered her many opportunities to touch the lives of students, parents, staff, all who came to know her. She was known for her wide grin and simultaneously raised eyebrows! She loved nature especially Acadia National Park in Maine. In 2018, Stone Ridge presented Sister Olson with the Barat Medal. One of the sentiments shared by a teacher and parent on this occasion was that Karen shared her love of nature through her photography, “and taught us all to see the sacred in the world around us.”

Sister Olson officially retired in 2017 when she joined the Avila Community in Albany, New York, where she was a much-loved member. Last fall, as her health declined, Sister Olson decided to move to Teresian House where she had been attending daily Mass and where she could receive the care she needed.

In the early morning hours of May 18, 2021, Sister Olson went peacefully to God. Sister Olson is survived by her brother, Peter (Ann) Olson of Fayetteville, New York, and nine loving nieces and nephews. A funeral mass will be celebrated for her on Saturday, May 29, at 11:00 a.m. at her family’s parish in Fayetteville. It will be live-streamed at www.icfayetteville.org/funerals.

Friend and colleague at Stone Ridge School of the Sacred Heart

Fri, 2021-05-21 21:12
We were friends and colleagues for 28 years. Karen was one of the most faithful and committed people I ever knew. She was a great friend and a wonderful person. I have heard sadness and wonderful tributes from many of the former students that we shared through the years. "A life well lived". RIP

Sun, 2021-05-23 05:10
Karen was in the community in Stoneridge when I was there for some months, from mid January 1978. A woman with a beautiful smile, an easy lope of a walk... and kindness. Karen, today, feast of Pentecost, I learned of your passing from this life to eternity. Rest well, and thank you for the contribution you have made to my life, my experience of relating with other people.

classmate at kenwood and manhattanville 54 and 58 May you rest

Mon, 2021-05-24 20:07
karen was one of my best friends when i arrived at kenwood and onto college at manhattanville. i have many fond memories of the antics we were involved in at both schools. Times have passed but often thought of her. may you rest in peace and save a place for me with you when{i hope to join you eventually.

Beloved Sr. Olson - a true friend to all who knew her

Thu, 2021-05-27 12:50
I was so saddened to hear of Sr. Olson's passing. She was truly a guardian angel to me at Stone Ridge. I was fortunate to have her as a teacher and love her from then on. I always knew that no matter what struggles I had, as being a teenage girl is never easy, I could always turn to Sr. Olson. She truly loved what she did, and loved her life.... and that attitude was contagious. Sitting and talking with her, it made me want to be better, try harder, and grow in my faith....simply through her example. She was frank and realistic, but also completely filled with optimism and would look toward what "could be." Being around her was healthy for the soul. I will certainly keep her family in my prayers and will prayer to her. She was one of, if not the best to come out of my experiences as a student at Stone Ridge.