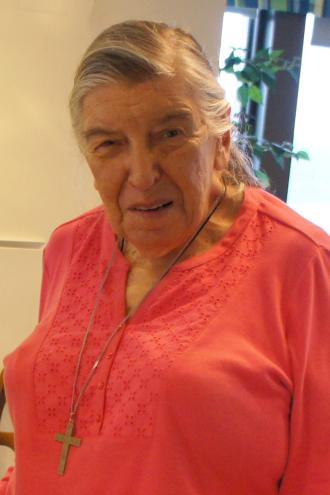 Religious of the Sacred Heart, Leontine O’Gorman, RSCJ, died October 10, 2020, in Atherton, California. Leontine was born on August 9, 1932, in New York City, the only child of Richard O’Gorman and Leontine Osanz O’Gorman. She was educated at the Convent of the Sacred Heart in Noroton, Connecticut, and attended Manhattanville College of the Sacred Heart, New York City and Purchase, from which she graduated in 1954 with a bachelor’s degree in Chemistry. Subsequently, she earned a master’s degree in American History from the Manhattanville Graduate Division and an M.A.T. Physical Science in Chemistry from the University of Missouri in Rolla, Missouri.

Leontine entered the Society of the Sacred Heart in 1954 at Kenwood, in Albany, New York, and pronounced her First Vows there in 1957. She made her Final Profession in Rome in 1962.

What she is most remembered for is her tireless work with the underserved in Harlem, where she spent most of her time in fund-raising and advocacy for area schools and parishes. In 1980 she took over the direction of the Fifth Avenue Community Center of Harlem that had been founded as a settlement house a few years earlier by RSCJ in New York. Here Sister O’Gorman undertook to develop educational programs and employment opportunities for inner-city youth and to fund-raise to sustain the center, which would occupy her for the rest of her active life. She called these endeavors Sacred Heart Family Programs, and they all operated out of the Center in East Harlem. One such program, “Alternative to Incarceration,” was set up to allow prisoners with drug and alcohol problems to get treatment in order to avoid repetition of criminal behavior upon release. Follow-up consisted of education and skills training so that the recipients could support themselves.

Sister O’Gorman also collaborated with the Family Outreach Program at St. Raymond’s parish in the Bronx to create the “Jobs for Teens” program for young people ages fourteen to seventeen. The teens were paid for twenty hours a week working for local businesses. If a business could not hire a teen because of limited financial resources, it was asked to “adopt” the teen. The student so adopted would be paid from employment scholarships funded by donations from individuals and corporations.

In a statement prepared for the provincial office of ministry in 1990, Sister O’Gorman described five different programs for young people ranging from a learning program for gifted minority children, an after school program at a neighboring public school, a teenage life skills program, and a TV show called Young Innovators, which sought to change the image of Harlem youth. She believed in the goodness of her clients and sought to develop it. She was talented in getting people to assist her in staffing the projects, to serve on her board of trustees, and importantly to part with their money to support the programs.

With all this activity, Sister O’Gorman was a woman of prayer. In answer to a questionnaire from the provincial team about her future desires, she stated that she hoped to take a year for a contemplative experience. That never happened as such, but when in 1984, she moved into an apartment in East Harlem around the corner from the Center, she called it the Harlem House of Prayer. Many a homeless person found shelter there in emergencies.

In 2015, Sister O’Gorman moved to Albany, New York to the Motherhouse with the Sisters of St Joseph.  Sister O’Gorman loved the community and the relationships she cultivated there. The Society of the Sacred Heart is grateful for the generous hospitality and care that was extended to her.

This past February, Sister O’Gorman moved from Albany and retired to the Oakwood retirement community in Atherton, California. Over the past two weeks, she experienced considerable weakness. While her death was unexpected, Sister O’Gorman peacefully went to God on October 10, 2020.

A funeral Mass for Sister O’Gorman will take place in the Oakwood Chapel in Atherton at a later date.