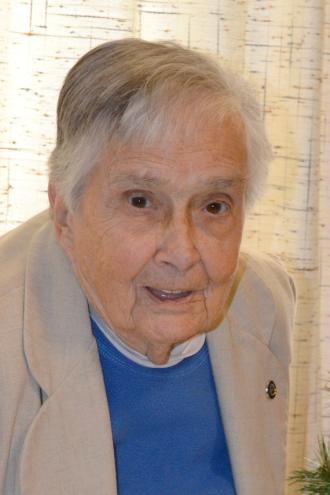 Madeleine Desloge was born on August 9, 1916, in St. Louis, Missouri, the third child and only girl of George and Madeleine Desloge. If there is one thing Madeleine was grateful for, it was her Sacred Heart heritage. She was fifth generation Sacred Heart on both sides of the family. On her father’s side, her great grandfather, Firmin Rene Desloge, had left Nantes, France, in 1812, to work for his uncle in Sainte Genevieve, Missouri. He had twelve children, and his second son, Jules Desloge, married Jane Chambers Thatcher, whose mother, Anne Biddle Chambers, had been a pupil of Philippine Duchesne at Florissant. The Thatchers traced their lineage to England and eventually to Florissant. Jane Thatcher’s sister, Anne Thatcher, was an RSCJ. Jane and Jules Desloge had eight children. The three oldest girls became boarders at St. Charles, Missouri; and the youngest, Jenny, married Madeleine’s grandfather, also named Jules. They, too, had eight children, and their three daughters were educated at Maryville Academy. The oldest, Zoe Desloge, entered the Society and became a missionary in Peru. One of their sons, her father, George Thatcher Desloge, married Madeleine Stith, who also had been a student at Maryville Academy.

When Madeleine was two, her mother moved the family to the home of her parents in Carondelet in South St. Louis because, during World War I, her father was in the Army and stationed at Fort Sheridan, north of Chicago. Madeleine and her two older brothers, Richard and John, were treated royally by her grandparents, as they joyously played at soldiering and Red Cross nursing. When she was five, she received a baby brother to play with, her youngest brother, Taylor. Then, when she was eight and in third grade, she was considered old enough to leave the Carondelet public school to travel by streetcar to City House, the Academy of the Sacred Heart in Midtown St. Louis. Her two oldest brothers were already enrolled at Barat Hall, the school for boys on the same campus. Thus began her life-long education at the Sacred Heart. By Christmas, she was advanced to fourth grade; and that same year, 1925, she received her First Communion and the Sacrament of Confirmation in the chapel at City House. Years later, at an end-of-the-year party in eighth grade, she received a surprising card: “You will have your share of joy and fun. Then you will go to become a nun.”

Also in eighth grade in 1928, Madeleine began eight years of service at the Catholic Outing House, a summer program for inner-city children. This experience was her introduction to a life of sharing with people different from herself. The following four years of high school at City House were during the Great Depression. At first, she became aware of the effect it was to have on her social life: no more Saturday luncheons, movies, or orchestra recitals. It was then that she became aware of the suffering of so many people. She witnessed breadlines and the increased shabbiness of those who lined up for food. By the time she reached college at Maryville, she realized that her summers with the children at the Outing Home had given her a real sense of stability and maturity. After she graduated from Maryville with a BA, having majored in French and minored in English and Social Science, she promised her family she would stay at home for a while. She coached field hockey at Ursuline Academy and played hockey on the St. Louis women’s hockey team. Finally, on January 12, 1938, she extricated herself from all ties and, departing from Union Station in St. Louis filled with college classmates, fireworks, and four gentlemen who could not understand why she was walking out on them, she travelled to Albany, New York, and entered the Society of the Sacred Heart at Kenwood.

When she arrived at Kenwood, Mother Ursula Benziger was mistress of novices, but in July she was replaced by Mother Agnes Barry. Madeleine was perfectly at home with Mother Barry, and they grew together. However, she found the Kenwood experience very challenging. For example, she could not understand and found it hard to keep the rule of silence, and she could not follow noviceship discussions, which seemed utterly strange. She recalled also that in two-and-a half years of formation, she stayed awake only three times at Holy Hour. But her hours spent in the print shop with Mother Charlotte Mitchell, who understood her independent spirit, helped to save her vocation. She never looked back because she knew that God wanted her to be there. On August 15, 1940, she pronounced her first vows.

For her first year of “active life” Madeleine was back in St. Louis at City House, where she taught middle school classes. For the next four years she was assigned to Clifton in Cincinnati, where she had the complete charge of twelve children under the age of eight. Several of these children were in boarding school because their fathers were in military service during World War II. Every weekday and night, as well as over the weekends, she became their mother, care-giver, disciplinarian, and comforter. These years of World War II in Cincinnati, with its large German population, made an indelible impression on her because of the rationing, blackouts, bell-tolling each evening, and air raid rehearsals in the basement. Of course, she also taught all her classes.

When time came for probation in 1945, she joined thirteen of her sisters from the States and two Canadians at Kenwood, not Rome, because trans-Atlantic travel was still unsafe. Their mistress of probation was Reverend Mother Barry. Madeleine made profession of final vows on February 11, 1946. After profession, she began a most unusual career: that of being a bouche-trou, or “one who fills holes,” “one of general utility.” She began to realize why the Lord had given her two qualities that became very useful to the Society: first, her adaptability, and second, her fidelity to her personal motto, “Yes, Lord, to whatever I am sent to do.” She often held three or four different positions a year and rarely experienced the same thing again. She was teacher, librarian, sacristan, vestiaire, music director, referee at baseball games, and dormitory mistress. After several years, she had taught every class from kindergarten to evening college classes at Maryville, as well as having acquired a Master of Science in Library Science from Louisiana State University and various instructional and catechetical certifications.

By 1978 Madeleine had served in St. Charles twice; Cincinnati, the Rosary in New Orleans twice; City House in St. Louis, Maryville twice; and Duchesne Academy, Houston, where she was director of the audiovisual resource center.

From 1979 until 1982, she served as a nurse’s aide and general assistant at Regis, the Society’s retirement home in St. Charles, Missouri. By that time, she was ready for her long-wished-for dream: to go to the missions in Japan or Korea.

Her missionary vocation, however, was realized in the United States when in 1982 she joined Sisters Rosa Maria Orjuela, Mercedes Posada, and Bienvenida (Charlie) Velez in La Belle, Florida. They were living in simple housing among a large community of migrant farmworkers and serving their many needs. Madeleine’s visit to the La Belle Community convinced her that she belonged there, where she was needed so badly. The simple surroundings, the simple lifestyle, and the opportunity to become involved in Our Lady Queen of Heaven Parish, all appealed to her. For the next twenty-one years, she became parish visitor, director of religious education, hospice volunteer, sacristan, and a representative on the sisters council of the diocese. However, tragedy struck in 1995. Sisters Orjuela and Posada were killed in an automobile accident, a terrible loss to the little community, the parish, and the whole migrant community. Although several other RSCJ had come to shore up the community, by 2004 there remained only three RSCJ: Bienvenida Velez, Marie-Louise Wolfington, and Madeleine, all with significant health problems. Reluctantly, the Society had to close its work in La Belle.

Reflecting on her ministry there, Madeleine realized the tangible support she had received from her La Belle community. Their self-proclaimed goal was “meeting the needs of the present moment with compassion.” Madeleine became invigorated by her sisters whose pastoral ministry was the driving force of their daily actions, and who took seriously their personal responsibility to live their mission as RSCJ with the charism of St. Madeleine Sophie. After they had to leave La Belle, Madeleine returned to St. Charles and for two years continued her visits to hospitals and nursing homes. In 2006, she joined her sisters at Oakwood, the retirement center for RSCJ in Atherton, California. Gradually, she began to realize that her memory was failing and her mental abilities lessening. Slowly, she had to give up her services to the sisters in the community. Although she became less and less able to communicate, she was able to participate in the celebration of her 100th birthday in August 2016.

On and off hospice care for several years, on January 29, 2018, Madeleine’s breathing changed noticeably. She was put on oxygen. A vigil began that evening. At 4:30 a.m., January 30, she quietly passed to her eternal home. During the past several years, her most frequent expression had been “Oh boy!” We can only imagine what her entrance into heaven must have been! She left behind a community who loved her very much; Oakwood caregivers, each of whom had a special relationship with her; and a large extended family who remained attentive from afar. May she be an intercessor for them, for the Society and for our world.

Madeleine is survived by her one sister-in-law, Marian Desloge, of St. Louis, Missouri, numerous nephews, nieces, grand-nephews and grand-nieces and her sisters in the Society of the Sacred Heart.

A funeral mass will be held on Saturday, February 10, at 10 a.m. in the Oakwood Chapel located at 140 Valparaiso Avenue, in Atherton, California. Burial will be in the Oakwood Cemetery.

Wed, 2018-02-07 09:03
<p>I did not know Sr. Desloge, but found her life story both interesting and moving.&nbsp; Imagine having an ancestor taught by St. Philippine herself!&nbsp; What a Sacred Heart history!&nbsp; Just beautiful.&nbsp;&nbsp;</p>