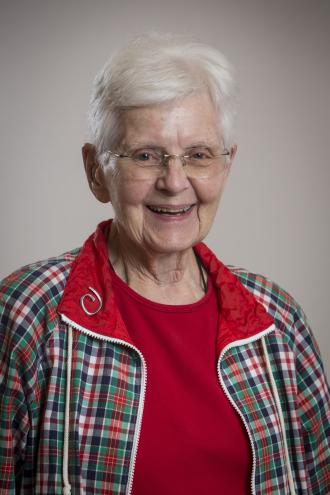 Mary Ann Foy was born on October 24, 1924, in Cincinnati, Ohio, to Edward Foy and Freda Bodemer Foy. Mary Ann was the first of two girls after five boys. Two years later, following the birth of her younger sister, Mary Ann’s mother died of thrombosis. Her father was left with six living children all under the age of ten. He later married Edith Gellenbeck, a classmate and close friend of Freda’s at the Academy of the Sacred Heart in Clifton. Mary Ann cherished memories of a very loving and happy home full of good times and steeped in the strong principles and faith of her parents.

The early education of the Foy girls was with the Sisters of Notre Dame de Namur at their nearby academy. However, in 1935, the superior at Clifton contacted Edith and offered to take two girls for the price of one, an offer Edith could not turn down. Twelve years later, on the eve of Mary Ann’s entrance into the Society of the Sacred Heart, the superior called her to the convent in Clifton to tell her that Edith had recently come to present her with a check for all the deficits on her tuition for eight years—money saved on many little sacrifices and years of bargain-hunting!

Mary Ann was deeply inspired by the dedication and loving care of the Religious of the Sacred Heart. Not only that, but she often observed the nuns at prayer during daily chapel visits, a fact that both fascinated her and drew her towards a life of close relationship with the Heart of Jesus. When she approached her father with the news of her vocation to the Society, he wisely decided to test her vocation by requiring her to attend the College of Mount St. Joseph-on-the-Ohio with the Sisters of Charity of Cincinnati for four years. It was 1942, in the early stages of World War II. She loved her college years, cherished friendships and support of classmates, culminating her life at the Mount as senior class president. Then, after graduating with a BA in French, in 1946, she left home with her parents and sister for visits to Washington, D.C., and New York City, before taking a steamboat up the Hudson River to enter the novitiate at Kenwood, in Albany, New York.

Mary Ann found the adjustment to life in the novitiate an easy one. The structure and regulations of her home had prepared her well. After pronouncing her first vows on February 11, 1949, she was assigned to the City House in St. Louis, but soon moved to the Rosary in New Orleans, where she was made surveillante general. After a short stay at Villa Duchesne, St. Louis, she joined fifteen RSCJ in New York in February 1954 for a sea voyage to Naples and a train ride to Rome for probation and final profession of vows on July 29, 1954.

From 1949 to 1966, Sister Foy taught at Sacred Heart schools in New Orleans, St. Louis, Cincinnati, and Omaha. During this time, Sister Foy’s father died in 1960.  Her stepmother, Edith never had children of her own. After thirty-six years of happy married life, she entered the Society of the Sacred Heart in 1962 at the age of sixty-nine.

While she was at City House, Sister Foy earned an MA in French from Saint Louis University in 1959, and then went to the Convent of the Sacred Heart in Clifton, Cincinnati, where she taught and was headmistress for the next seven years. During these years, Sister Foy earned certification in counseling and an MS in Education at Xavier University in Cincinnati in 1966.

In 1966, Sister Foy moved to Duchesne College in Omaha as freshmen counselor and instructor in Education and French, little dreaming how her life would be turned upside down. Vatican II proved to be the beginning of a hard training course for her. As she later stated it, “I began to question; I started to experience greater and greater freedom in letting go of my absolutes. I questioned authority for the first time. I struggled with lifestyle changes and new forms of prayer and retreats. Gradually, I learned to live with ambiguity, to trust, to be a ‘process’ person. I even found myself learning from the young—students and religious. This was both a surprise and a grace. I changed ministry and found myself at Seattle University working on a Masters in Religious Education in order to begin ministry with adults, my peers who were so mixed up and angry at the time.”

In 1968, when Duchesne College closed, Sister Foy remained in Omaha in public relations for one year. After this, she went to Woodlands Academy in Lake Forest in 1969, as college counselor. At the same time, she became involved in the National Federation of Christian Life Communities, a Vatican II update of the Jesuit sodality movement. In time, she began working full time in public relations with NFCLC, in what she called a “crash course in parishes and dioceses across the U.S.,” as adults in the Church tried to accommodate to the changes of Vatican II. “They fed me; they challenged me in their own unique way. They called me, affirmed me, and led me to new frontiers.”

In 1972, Bishop Maurice Dingman of Des Moines, Iowa, invited the NFCLC to come to his diocese. Sister Foy went to the diocese in 1973, eventually becoming a member of a pastoral team in a parish. She spent six years at the parish and often said that she could write a book on the team of equals she experienced at Holy Trinity parish. After a sabbatical year in Boston, in 1980, she applied and was accepted for the position of director of the Permanent Diaconate and lay ministry formation in Memphis, Tennessee. She formed a team consisting of a Christian Brother, a married woman, a Kentucky Dominican sister, and a Sister of Providence who produced written materials and a timeline for a lay ministry training program as part of the formation requirement for permanent deacons.

In 1984, the provincial team appointed Sister Foy, along with Sisters Susan Campbell and Betty Boyter, to explore the need for spiritual directors in San Diego, California. For three years, they worked to enlist the support of the bishop and priests of the diocese. In 1987, when the support of the diocese finally came, the province provided them with a complex of four apartments near the ocean, where they could house retreatants and do workshops in their own space. They named it the Spiritual Ministry Center. A year later, they were joined by Eileen Bearss, RSCJ, first as a bookkeeper and later as a fully credentialed spiritual director.

From 1987 to 1997, the Center grew into a well-known and respected work of the diocese, touching persons of all faith traditions and from all parts of the country, and even abroad. The following twelve years were rich in blessings, with Sister Foy continuing the ministry of spiritual direction and giving a few retreats each year. She was named area director for several years. In 2000, Sister Foy moved to Redwood City, California, and began volunteering at the St. Francis Center for poor Hispanic women and children there, as well as at Oakwood, the retirement center for the Religious of the Sacred Heart in Atherton. Having strongly supported the Associates movement for a number of years, Sister Foy became involved with Bay Area Associates and religious, as well as local groups of Society Associates.

In 2007, Sister Foy became a member of the pastoral team at Oakwood for four years, which entailed regular visiting of the residents, as well as planning and preparing monthly retreats for them. In 2011, Sister Foy was the RSCJ representative to the local Coalition against Human Trafficking—a growing area of concern not only in the United States but in the world. She felt a call to invite her sisters to become involved in this issue.

Sister Foy’s life and energy, however, were not limited to the local scene. At this point, she had thirty-three living nieces and nephews, seventy grand-nieces and nephews, and seven great-grands—most of them living in Cincinnati—whom she visited annually, and kept up with as many as possible. They too, she said, were large part of her life and lifetime ministry!

In 2014, Sister Foy moved to the Oakwood Retirement Community in Atherton where she was a much-loved member of the community. She died suddenly and peacefully during the afternoon of April 19, 2022, after having been on hospice for one week. That morning she was singing in the Barat Community Room, and in the afternoon she had a change. She passed away after she was thanked for her life in the Society and our sisters who were with her renewed her vows.

A funeral Mass will be celebrated for Sister Foy on Thursday, May 19, at 10:00 AM PDT. Her burial will follow in the Oakwood Cemetery.