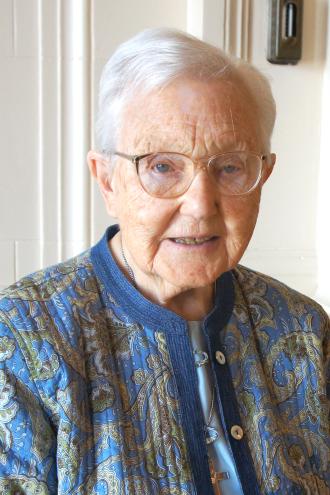 Religious of the Sacred Heart, Mary “Be” Mardel died October 4, 2022, in Atherton, California. She was 104 years old. Mary, or “Be” as she was affectionately known, was born on March 2, 1918, in Seattle, Washington, to Charles Mary Mardel and Ethel Alton Mardel. She was the oldest of three children. Her brother Joseph died at birth in 1919, and her brother Charles died in 1944 at the age of twenty. Sister Mardel attended the Convent of the Sacred Heart in Menlo Park, California, graduating in 1935. She then went to the San Francisco College for Women, graduating with a B.A. in English in 1943. During her first year in college, Sister Mardel wrote her father telling him of her plans and hopes to enter religious life.  With the loving support of both her parents, Sister Mardel entered the Society of the Sacred Heart in 1937 while still in college.  She pronounced her first vows in 1940 and made her final profession on July 31, 1945.

Sister Mardel taught and served in administrative roles in Sacred Heart communities and schools for over fifty years, beginning with the Convent of the Sacred in San Francisco in 1940, where in addition to teaching, she served as dean of students for ten years and mistress general from 1953 to 1961. From 1961 to 1966, she was the local superior at the Convent of the Sacred Heart in El Cajon, California. In 1966, Sister Mardel founded the St. Madeleine Sophie’s Center in El Cajon. The Center focused on preschool children with developmental challenges to help them get ready for public school. When later, the public schools started working with these children; the Center turned its focus to adults with developmental challenges, which remains its focus today. She was the local superior of the Convent of the Sacred Heart in San Francisco, a large community that in 1970 was divided into smaller groups.

From 1970 to 1972, Sister Mardel was a member of the Provincial Team of the San Francisco Province. In 1972, she was named Provincial. After her six-year term as Provincial, she became the Director of Schools in San Francisco from 1979 to 1984. She had designed the new structure for the schools: each school had its own principal; a director was responsible for the coordination and administration of the three schools. At the same time, she was the director of the Children of Mary. Beginning in 1984, Sister Mardel served as the alumnae/i director at Convent of the Sacred Heart, Broadway, in San Francisco, and the following year headed the capital campaign for the school. She then went to Grand Coteau, Louisiana, in 1988 where she assisted the principal in strengthening the development office at the school.

In addition to teaching and administration, Sister Mardel was a dedicated activist. On August 3, 1973, while she was provincial, she joined 85 religious (30-40) sisters on the picket line with the United Farm Workers in defiance of court injunctions limiting picketing and protesting the treatment of migrant farm workers in California. After boarding a bus from San Francisco to the Fresno countryside, the group divided into those willing to be arrested and those not able to do so. Sister Mardel and Carol Naumann, RSCJ, were members of the “The Fresno Sixteen,” a group of women religious who joined 30 others in being arrested. Sister Mardel emphasized that she took these actions in her own name, not as provincial of California. The protestors spent 10 days in jail with 55 women and girls in one room day and night. During her time there, Sister Mardel kept a journal, trying to capture the experience. One of her entries was entitled, “A Letter from Fresno Prison,” dated August 10, 1973, where she recounts, “It has been the revelation of another world at our doorstep, where beautiful, warm, loving, generous, courageous people have so little power, are so put down and know so little about what to do to remedy the pain in their lives.” She continues, “From one’s narrow double bunk a little world has been observed…a microcosm of life to witness the growth of a community of diverse people through shared anxiety, suffering, anger, and self-sacrifice growing out of a commitment to a mission.” As news of the incarcerations spread, overwhelming support and gratitude flooded in for her taking a stand in defense of justice for migrant farm workers.

Sister Mardel spent the last years of her life at Oakwood, the retirement center for the Religious of the Sacred Heart. She was known for her quick wit and her love for others. During her long life, she lived through two pandemics. She celebrated her 102nd birthday in 2020 and logged in right on time by Zoom for her meeting with a provincial team member. While being on hospice for nearly three years because of a cardiac event, Sister Mardel shared that she was ready and even a little impatient to go to God; she believed heaven would be “love, love deeper and more profound than any experience of God’s love one has here.”

On October 4, 2022, on the Feast of St. Francis, Sister Mary “Be” Mardel went very peacefully to God.

A private funeral mass was held at Oakwood on Thursday, October 13, 2022. A Memorial Mass will take place on Saturday, November 5, 2022, at 3:00 pm at Schools of the Sacred Heart, 2222 Broadway in San Francisco, followed by a reception.