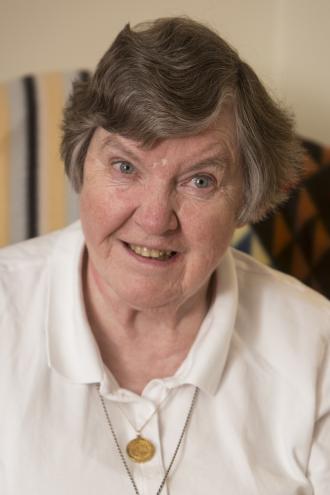 Mary Loretta Busch, affectionately known as “Buschie,” was born on April 30, 1938, in St. Louis, Missouri, to Frank William Busch and Ruth Barry Busch. She was one of eleven children and attended the Academy of the Sacred Heart in St. Charles, Missouri. She remembers her home life as a happy one, with her parents’ strong faith in God. The early seeds of her vocation began when Mary Loretta was very young while her mother was brushing her hair. Mary Loretta asked her mother why she was born with only one ear. She learned this from her older sister when she was only three years old; her mother answered her saying that it was true that she only had one ear, and that she was born that way because “Jesus wanted me to help him to carry his cross.” By the time Mary Loretta was in seventh grade, she was thinking about her vocation. She encountered the “Pink Sisters” (the Holy Spirit Adoration Sisters) in St. Louis and believed she was called to contemplative life. She held this belief for a number of years. By the time she was in high school at the Academy of the Sacred Heart in St. Charles, she shared with one of the nuns who was a friend her desire for the contemplative life with the Pink Sisters. While her friend encouraged her vocation, she did not say anything about the Society of the Sacred Heart. As time went on, Mary Loretta enjoyed school and made many friends. During her third year, she received an invitation to a ceremony of religious profession at the Pink Sisters and was very impressed with the beautiful ceremony. A few weeks later, she attended a ceremony of religious profession of a coadjutrix sister in the chapel at St. Charles with all the students present. This experience affected her deeply, with its simple beauty and with what she saw as a simple life given to God. This is what she desired. The first person she shared this with was her RSCJ friend, whose comment was, “I was waiting for you to say that.”

Following her high school graduation in June of 1956, Mary Loretta entered the Society of the Sacred Heart as a coadjutrix sister in St. Charles and pronounced her first vows there in 1959. She spent her first years (1959-1969) serving as refectorian and in the community vestry at the Academy of the Sacred Heart in St. Charles, at City House and Villa Duchesne in St. Louis, and the Academy of the Sacred Heart in New Orleans. In 1964, the General Chapter made the decision to eliminate the category of coadjutrix sister and have one category only, making all RSCJ one. While there was much rejoicing in communities at this decision, for Mary Loretta it was disappointing, as she loved her life as a coadjutrix sister. She was preparing to make her final profession and experienced quite a bit of fear and anxiety about this new way of life, which for her meant attending college and earning a degree. On the day of her profession, Mary Loretta was asked by the superior if she was willing to do anything the Society asked of her. At that moment, Mary Loretta prayed to St. Madeleine Sophie that if this was what she wanted, she would do her best not to let Sophie down. When she said “yes,” to her superior that was the moment of her profession, which was later confirmed in the profession ceremony at Villa Duchesne in St. Louis on December 29, 1964.

From that day on, Sister Busch’s life changed. She went back to school to learn to type and in August of 1965, she was sent to Grand Coteau where she was given jobs in the boarding school. In 1969, Sister Busch enrolled in Xavier University in New Orleans where she completed her undergraduate degree in Elementary Education in 1972. She also completed an MA in Counseling at Tulane University in 1977.

After graduating from Xavier, Sister Busch began teaching at the Academy of the Sacred Heart in New Orleans and served as librarian and community treasurer there until 1980. She returned to the Academy of the Sacred Heart in St. Charles where she taught for the next twenty-six years. After she retired from teaching in 2006, Sister Busch remained in St. Charles for a number of years, living first in the Fifth Street Community and then in the community on Decatur Street continuing her close relationship with the Academy where she was dearly loved. In 2010, Sister Busch won the Outstanding Coach/Mentor Award at a statewide robotics competition. This was quite a contrast with her early years in the Society when she preferred the life of a coadjutrix sister. By saying “yes,” on the day of her final profession and every day since she grew in ways she could not have imagined.

In 2013, Sister Busch officially retired to the Abba Community in Albany, New York, where she continued to be active in the life of the community. As she needed care, she moved, in 2018, to the Teresian House Community in Albany, where she was dearly loved. She participated in multiple activities where her creative talents were evident and impressed staff and residents alike with her kindness and simplicity.

Soon after a visit from her brother, on June 2, 2022, Mary Loretta “Buschie” Busch, RSCJ, died peacefully in her sleep.

A Funeral Mass will be celebrated for Sister Busch on July 1 at 11:30 a.m. at St Francis of Assisi Church, 93 Fourth Avenue (at Franklin Street) Albany, New York 12202