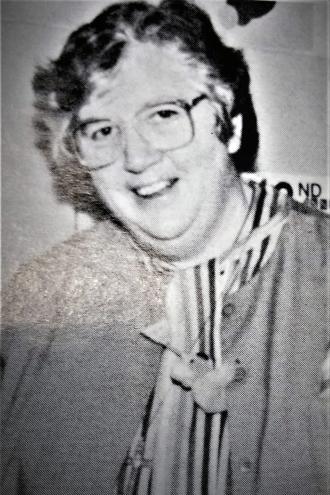 Mildred Barbara Kearins, a Religious of the Sacred Heart, was born on March 10, 1929, in Chicago, Illinois, to Michael Joseph Kearins and Mildred O’Neill Kearins. Affectionately known as “Bebe,” she was one of three daughters, but grew up with only one sister, the oldest having died before Bebe was born.

Bebe graduated from the Academy of Sacred Heart in Grosse Pointe, Michigan, in 1947 where, according to a fellow alumna, “she was a star athlete and an important personality.” She graduated from Manhattanville College of the Sacred Heart in New York in 1951 with a BA in English. As a religious she returned there and added an MA in History in 1961.

Sister Kearins returned to Kenwood from Rome to teach elementary students for five years. In 1959, she moved to the Academy of the Sacred Heart, in Bloomfield Hills, Michigan where she taught middle and upper school, a position she dearly loved, for the next thirty years. Testimonies that have come to Bloomfield since the announcement of her death speak volumes about her influence and the love her students had for her. In the words of an RSCJ there, “Bebe’s legacy at Bloomfield will be remembered with gratitude as her love lives on in the lives of so many alumnae who say some of their great life lessons were learned in her classroom.” Bridget Bearss, RSCJ, head of school at Bloomfield Hills, posted, “…beloved educator…warrior of the heart for every ‘underdog’ and woman of great love for every student she educated.”

Besides her ministry in the school, Sister Kearins taught religion classes at St. Paul’s in Grosse Pointe and at St. Hugo of the Hills in Detroit; she worked in a variety of tutorial and enrichment programs for underprivileged children in the City of Detroit during summers, tutored young women studying for a college degree and served as a volunteer at St. Thomas More Church in Detroit.

In 2004, she moved to Kenwood, and in 2007, to Teresian House Nursing Home. On Sunday, August 13, 2017, after many years of patient suffering, Sister Kearins died peacefully into the embrace of her God. Upon hearing of her death, her niece Cindy said that Bebe was “the kindest person she ever knew.” The staff at Teresian House who cared for her with such tenderness would agree. That kindness and her dedication to teaching were accompanied by an infectious sense of humor and ability to tell a funny story, sometimes at her own expense.

Bebe is survived by her niece, Cindy Wilberding of Camden, South Carolina, and nephews Michael Wilberding, of Bloomfield Hills, Michigan; Edward Wilberding, of Grosse Pointe Farms, Michigan, and her sisters in the Society of the Sacred Heart.

Her funeral service will be held Monday, August 21, at 10:00 a.m., in the Infant of Prague Chapel at Teresian House, followed by her burial in the Kenwood Cemetery. Her body will be brought to Teresian House for viewing at 9:30 a.m.

Sun, 2018-07-01 21:42
<p>I was just thinking about St. Kearins and found her obituary here. I am deeply saddened about her passing and that I did not take a trip to visit her these past several years. She inspired in me a love of history that has brought me where I am today, teaching history at Oakland University. She took the time to teach me Canadian History, one-on-one, when I was at Sacred Heart. She mentored me as I did my secondary school teaching experience at Sacred Heart while in college. She always had time to talk when I visited. I cherish our lunches together, her visit to OU when I was studying there, and her coming to my parish to talk to the women's club about prayer. I'm certain she's studying history still, with at least a few of her canine friends and guinea pigs in attendance. May God bless and keep you, Sr. Kearins. You made a big difference in this world.</p>