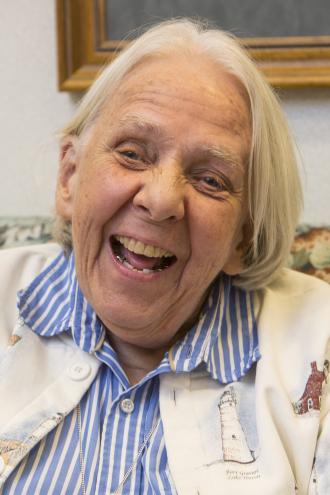 Oonah Ryan was born in Wilmington, Delaware, on September 16, 1932, to James Edward Ryan and Oonah Mary Ryan. Oonah grew up on a farm where her father was a breeder of thoroughbred racehorses. After graduating from Manhattanville College of the Sacred Heart in 1954, with a degree in English, Oonah entered the Society of the Sacred Heart in August 1954, at Kenwood in Albany, New York. In 1957, Oonah pronounced her first vows and in February 1963, she made her final profession in Rome.

Sister Ryan’s early years in the Society were devoted to teaching at Sacred Heart schools in Grosse Pointe, Michigan; Greenwich and Noroton, Connecticut; and Houston, Texas. She taught at Harlem Prep in New York from 1966 to 1968, before moving on to the Academy of the Sacred Heart at Bloomfield Hills, Michigan, where she taught for six years. Beginning in 1974, while also teaching a couple of religion classes at Bloomfield Hills, Sister Ryan became a member of a the retreat team at Ephpheta House (House of Prayer), conducting workshops and retreats. During this time, she also was an intern in Clinical Pastoral Education (CPE) until 1976.

In 1977, Sister Ryan left Bloomfield Hills for the inner city of Detroit, where she served as the assistant and acting pastor at St. Agnes Parish. When she arrived at St. Agnes, she found a depressed and struggling community with nearly half of the residents unemployed, most of whom were teens and single mothers. The lack of job skills, Sister Ryan believed, could be addressed through a job-training center. She found that there were opportunities for jobs in silk screening but few places that taught the craft. Sister Ryan shared her idea of a job-training center with her friend Sister Nancy Fearon, assistant principal of St. Martin de Porres High School, whom she met while teaching part time at the school.

Together they started the job-training center, “Neighborhood Artisans,” with twenty dollars to purchase materials to construct a simple silk screening machine, and began teaching area residents. Once under way, they applied for and obtained a federal grant that provided for newer equipment and a professional staff. The government-funded program started in May 1978 with four staff persons and twenty-six applicants in the auditorium of the former parish grade school converted into a studio. Because of the training, all of the applicants were offered jobs as silk screeners, and some even chose to enroll in higher education. Once the grant expired after six months, Neighborhood Artisans incorporated as a non-profit organization, seeking private funding and subcontract work. Some of the customers of Neighborhood Artisans included the local Catholic high school and the Academy of the Sacred Heart at Bloomfield Hills. Besides silk-screening, the center also employed community residents for light industrial work, subcontracted from area companies. Sister Ryan found the people who benefited from the job-training center to be highly skilled, reliable, and needing jobs to support their families. In a year’s time, Neighborhood Artisans brought an estimated $95,000 worth of salaries to the parish neighborhood. Sister Ryan served as co-director of Neighborhood Artisans for eight years. The center is still in operation today, located in Highland Park, Michigan.

For Sister Ryan’s creative spirit, it was important to engage in art and in work with the poor, as well as to pursue the contemplative life. While it was hard to withdraw from her work at Neighborhood Artisans, Sister Ryan soon began a similar ministry in Bangor, Maine. With a view to helping residents earn their livelihood, she opened a well-located store downtown, where homemade knitted goods, cards, hand woven rugs, jams, paper flowers—all manner of goods were sold. When she was not working there (sometimes ten hours a day), she was at home working with people who needed help with their projects. In the midst of it all, she earned a BFA at the University of Maine.

In 2015, as her health declined, Sister Ryan moved to Albany where, for a brief time, she lived at Abba House. In early 2016 as she needed care, she moved to Teresian House, something she found difficult and confining for her free spirit. Although she struggled mightily, she endeared herself to the staff, volunteers, and the other residents to such an extent that one of the security guards, expressing his sadness when she died, said “She was one of us.”

During the last two days of Oonah’s life, there was a steady stream of staff, residents, and her RSCJ sisters in and out of her room to pray beside her or simply to be with her as she waited in deep sleep. Finally, the afternoon of November 20, only the beloved aide, who had spared nothing in her care of her, watched her slip away into the freedom of God’s embrace.

Oonah is survived by her brother, Owen Ryan, and his family in Kirkwood, Pennsylvania, by her brother-in-law in Maine, and by her sisters in the Society of the Sacred Heart.
Sister Ryan’s funeral mass took place on Tuesday, December 3, 2019, at Teresian House.