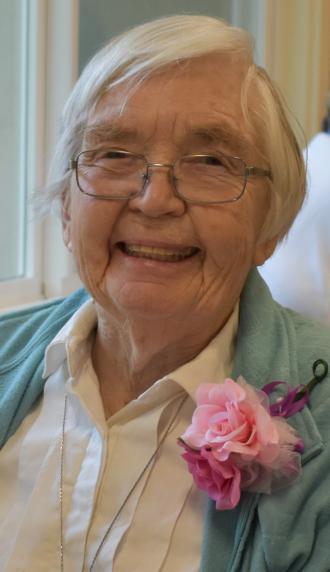 Pamela Hickey, known all of her life as Pam, was born in Chicago on March 22, 1929. Her father, Harry Cornelius Hickey, was born in Indiana, but his early life was spent in northern Canada as surveyor for the Canadian National Railroad. Her mother, Pauline Carroll Hickey, was born in Ontario, Canada, and earned an RN degree at Montreal General Hospital. Pam was born during the year of the Great Depression and recalls that her father lost his savings, and the family struggled financially for many years. Living across from Lake Michigan, Pam had happy memories of swimming in the lake with her sisters, and of winters sledding and ice skating. When her youngest sister, Mary, became seriously ill, the doctor advised a year of rest and a school with smaller classes than those in the parish school. Pam’s mother walked to the Convent of the Sacred Heart [Sheridan Road] and arranged for reduced tuition in exchange for serving in any way she could. All three girls were subsequently enrolled at the school, where Pam first encountered the Society. She describes those years at Sheridan Road as “some of the best years of my childhood.”

After graduating from Sheridan Road, Pam enrolled at Barat College. During a spring retreat of her freshman year, Pam shared with Sister Dean Traynor the possibility of a vocation. Within three months, Pam entered the Society of the Sacred Heart at Kenwood, in September 1948. Upon arriving at Kenwood, Pam joined nearly 100 novices and postulants. Fearful that she would not fit in with the more “serious and ‘holy’ sisters,” Pam was grateful that “God kept me.” She made her first vows on May 5, 1951. Following her first vows, Sister Hickey returned to Sheridan Road to teach the second grade. Over the next few years, she taught at Hardey Prep, and at Lake Forest, where she also served as a dormitory mistress.

During the winter of 1956, Pam crossed the Atlantic to begin probation. On July 30, 1956, along with fifty other probanists, Pam made her final vows. After profession, Pam and another professed became two cornerstones of a new community in southern California. The El Cajon community, located forty miles east of San Diego, was originally housed in an unoccupied wing of the San Diego College for Women. Things were tough in the beginning for this fledging community, with no car and depending on the weekly food box brought over from the college. One day, a neighbor kindly offered them a shark her husband had caught, but no one had any idea how to cook it.

Pam spent two years at El Cajon and then was sent to Clifton in Cincinnati, which had just become part of the newly-organized Chicago Vicariate. She was there for two years and then had a five-year ministry in Chicago as head of Hardey Prep. Pam returned to Clifton and high school teaching in 1965. She was also the surveillante general.

In 1967, Pam returned to Lake Forest, to the newly built Woodlands Academy. In 1969, a call came for another foundation, a school the Society was opening on part of the campus of Gilmour Academy in Gates Mills, Ohio, a suburb of Cleveland. The school, Glen Oak, was founded as an experiment in the “open classroom.” There were no walls between classrooms, and the class scheduling was fluid. Sister Bonnie Kearney, one of the most significant persons throughout Pam’s life, accompanied her to Glen Oak. However, the tensions involved in operating an experimental school were high, and Pam and Bonnie stayed only until 1971.

In the 1970s, Pam had the opportunity to go to Japan to teach in the International School of the Sacred Heart in Tokyo. At this time, influenced by the calls of the Second Vatican Council, several RSCJ in the country had embarked on ministries focusing on the underserved. Pam was one of them.

From 1976 to 1979 and from 1984 to 1986, Pam worked for Catholic Charities in Chicago, after which she returned to teaching. First, she went to Sullivan House High School on the far South Side, a coed school of last resort for high school dropouts. Next Pam went to Providence-St. Mel on the West Side, a private, coeducational pre-K-12 school. Then in 1986, she and Sister Kearney answered the call from an alumna of Lake Forest to rescue a financially suffering and once prominent Catholic academy, the Josephinum, founded in 1886 by the Sisters of Christian Charity. The school was on the verge of closing when the Society assumed its administration. In 1986, Sister Kearney became principal and Pam taught math and directed the counseling services. In 2011, the Josephinum was fully accepted into the Network of Sacred Heart Schools.

By 2000, Pam had moved to Boston and was teaching in Cathedral High School; then by the beginning of the new century, Pam was back in her native city. But within a decade, as her mobility was failing, she moved to California, to the Vera community near Oakwood, the Society’s retirement center in Atherton. A few years later, Pam moved to Oakwood. There she brought her lively personality, her sense of humor, her ready smile, and continued some of her activities. She drove every Friday to St. Francis Community Center in Redwood City, where she tutored adults in its ESL program. She also continued emailing her prayerful morning “musings,” which captured in poetic form her love for prayer and her sense that “Joy in Faith,” her profession name, was to be lived every day. By June 2018, the “musings” stopped, an indication of her gradual decline. An inoperable acoustic neuroma and pneumonia finally ushered her into eternal life, whence she will continue to intercede for so many whom she loved and served on earth.

Pam is predeceased by her parents and her sister, Joan Hickey Brennan. She is survived by her sister, Mary Green of Lake Forest, Illinois, numerous nieces and nephews, and her sisters in the Society of the Sacred Heart.

Wed, 2018-11-07 04:43
<p>Im saddened to hear of Sister Pam’s passing. She was such a sweet and compassionate person. It’s because of her that I decided not to forego attending college after I found out I was pregnant as a senior. She helped me apply to different schools and encouraged me to never give up. She also acted as advisor to the prom committee and made planning fun and easy. She will be missed. Rest well Sister Pam 😢</p>