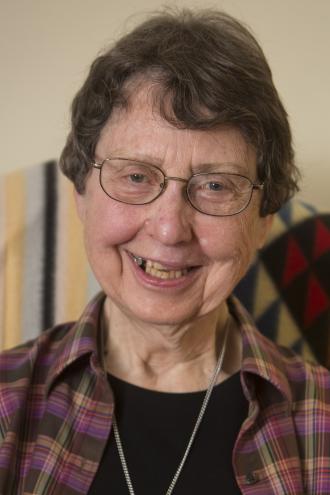 Religious of the Sacred Heart, Patricia Reid neé Tighe died on October 11, 2022, in Albany, New York. Pat was born in Jersey City, New Jersey on May 11, 1930, to Joseph A. Tighe and Anna M. Cassidy. She was one of four children with two sisters and a brother and enjoyed a happy childhood with a large extended family.

Pat graduated from Manhattanville College of the Sacred Heart in 1951 with a BA in English and an MA in English in 1959. She was a candidate for the Ph.D. in English at Fordham University from 1963 to 1966. She earned a second MA in Religious Education from the University of Detroit in 1970. Following graduation from Manhattanville, she entered the Society of the Sacred Heart in August 1951 at Kenwood in Albany. She pronounced her first vows in 1954 and made her final profession in February 1960. Sister Tighe taught at Sacred Heart schools in Rochester, New York (1955-1958); Greenwich, Connecticut (1958-1963); New York, New York (1963-1966); and Albany, New York (1966-1968).

After nine years as a religious of the Sacred Heart, Sister Tighe left the Society in 1969 and married Edmond Reid in 1972. She taught in public schools from 1970-1987. In 1992, Pat and her husband became members of the Eastern Orthodox Church and made their monastic profession as Companions of New Skete, a fellowship of lay people who seek to be formally connected with the New Skete Communities in order to deepen their spiritual lives. When Pat’s husband died in 1997, she joined the Nuns of New Skete. She made her profession in 2001 and was known as Sister Therese Reid. While deeply committed to her New Skete community, Pat never lost her love and respect for the Society. She returned to Kenwood over the years and would “think of it and the whole Society as the home of my heart.” During her prayer, Pat felt a strong desire to return to the Society.

After a thirty-two-year absence, at the age of 74, Pat wrote to Sister Kathleen Hughes, provincial of the United States Province at that time, asking her to consider receiving her back into the Society of the Sacred Heart. In her letter, dated December 4, 2001, Pat said, “I thought the attraction would pass, but it has only grown stronger: It is a peaceful desire that fills me with joy, a joy I have not felt in a very long time.” Sister Hughes wrote to then superior general, Sister Clare Pratt, to request Sister Reid’s readmission to the Society of the Sacred Heart. With the approval of the General Council, an Indult of Readmission without repeating the novitiate was granted on March 8, 2002. Sister Reid began a period of probation according to a plan created by the Provincial Team leading to temporary profession, then final profession. In May 2002, Sister Reid professed the Catholic faith through the Nicene Creed and was received back into the Roman Catholic Church.

On July 31, 2003, Sister Reid made her first vows at Kenwood. During this time, she worked as an iconographer and studied Society documents. She also was assistant to the director of Kenwood’s Pax Christi retirement community (2003-2004) while continuing with her iconography and study. Her iconography was well known and she received commissions for her work.

The formation plan for Sister Reid that began in 2002 included having a home base at Kenwood. During the summer months, she visited Grand Coteau and Menlo. She returned to Albany in the fall for a year of probation. As she reacquainted herself with the works of the Society, she recounted that it had been “a year of great joy and fulfillment.” Sister Reid, having spent nearly twenty years in a monastery, reentered a Society that by this time had undergone significant change. The educational mission had become more widely and deeply understood as the Society continued to respond to the changing needs of the world, especially those who are poor. Religious had left their cloister and new Constitutions had been written.

Sister Reid found that going back to the classroom after so many years away was a challenge, but she was encouraged to move to Grand Coteau and accept a job at the school teaching three religion classes. The school also found a studio where she could finish the icons for which she had commissions. The experience of being back in the classroom, of getting to know the students’ names, the location of everything, and acclimating to a slower pace, all was challenging at first. Holding fast to schedules and her reactions when that did not work revealed some things she needed to examine in herself. As she did so, she relaxed and began to truly enjoy teaching again, realizing that the Society’s vision of transformative education “affects not just the taught but also the teacher.”

During the years following her profession, Sister Reid continued her iconography and teaching. After leaving Grand Coteau, she lived with the community at 860 Beacon Street in Newton, Massachusetts, for five years. In 2015, Sister Reid was sent, because of her declining health, to the Abba community in Albany. She was able to continue her iconography and keep up with the friends she had made over the years. As her health continued to declined, in 2021 she moved to Teresian House to receive the care she needed.

A funeral mass will be held on Thursday, October 27 at St. Francis of Assisi Church at 11:00 AM. Two of Sister Reid’s icons are on the wall on either side of the altar.