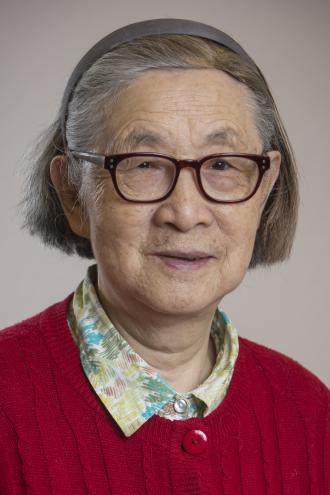 Religious of the Sacred Heart, Rose Chen, RSCJ, died November 11, 2021, in Atherton, California. She was 94 years old and a member of the Society of the Sacred Heart for 70 years. Rose was born on July 27, 1927, in Shanghai, China, to Chen Wen-fu and Chen Lin Lan-ying who were descended from several generations of Catholics. Rose was one of twelve children, only six having survived, and the only girl. Her father was well educated and became one of the pioneer, western-style educated electrical engineers who was asked to start a generating plant at the bank of the Yangtze River in Nanjing. Her mother took care of the home and the children and had a devotion to Our Lady. She would gather the whole family in the evening during the month of October and May to say the rosary.

Rose’s father endured separation from the family for eight years when he was assigned by the government to the wartime capital of Chongqing. The rest of the family took refuge at an aunt’s home in Xu Jia-hui, the French Concession of Shanghai. After the start of World War II, the Japanese occupied the Concession. As a result, Rose and her family were cut off from all contact with her father. After the end of the war, her father was sent to Tokyo as a special envoy to reclaim the generating machines from the Japanese. After a short time, disgusted with the corruption of the Chinese officials, he resigned, returned to Shanghai, reunited with his family and began working at a private electric company.

Xu Jia-hui during the war was predominately Catholic in culture, was the birthplace of the first Catholic prime minister in the Chin dynasty, and was nicknamed “Little Vatican.” Among the institutions were a grand cathedral, two seminaries, and a school for boys run by the Jesuits and for girls run by the Helpers of the Holy Souls. There was also an orphanage, pharmacy, and a vestment workshop, in addition to a Carmelite monastery. Religious were everywhere. Time was marked by the striking of the cathedral clock at every quarter-hour and the ringing of the Angelus. Children in the area were required to attend Catholic schools or the parents would be excommunicated. Rose was sent to the Xu-hui Girls’ Middle School where she had a “venerable religious aunt to live up to,” and her brothers attended the Jesuit academy. Her second brother later became a Jesuit.

The “reluctant” seed of a vocation was instilled in Rose by her aunt. Rose remembered this reluctance because of her perception of the lack of “joy of life” of the nuns and her experience of the school as like a novitiate. The time spent in the chapel and festival processions often took precedence over the classroom. However, this perception changed when Rose met the Sacred Heart nuns in Aurora College for Women in Shanghai. The nuns’ spiritual qualities, their devotion to the Sacred Heart, and their emphasis on education and spirituality attracted Rose. Through her involvement with the Legion of Mary, Rose experienced the power of goodness, compassion and transforming love shown by her companions there. After graduating from high school, Rose decided to delay entering the Society in order to experience a little of “life.” She accepted the job of secretary to Mother Thornton, dean of the college, and continued to be active in the Legion of Mary.

After the Communist takeover, the activities of priests and religious were closely scrutinized, sometimes forcing them underground. On a couple of occasions, Rose, accompanied by a priest, was sent to minister to these groups. After one such trip, a missionary sister told Rose that the Security Bureau was looking for “the two spies from Shanghai.” Not long afterward, Rose learned that all the nuns were leaving for Japan, and if she still wanted to join the Society, she would have to leave in a week’s time. Worried about her parents’ reactions, Rose took the advice to tell them that she got a scholarship to study abroad since it was unlikely she would ever see her parents again. While her father felt her departure, he was consoled by the fact that she would have the opportunity for more intellectual development. Her mother, however, sensed the truth and had a heart attack. She recovered and was lovingly cared for by her many goddaughters. Rose never did see her parents again. On December 17, 1950, she left home and everything behind except a name on the communists’ black list. After a number of starts and stops, Rose arrived on Christmas Eve at the Tek-Sun school of the Sisters of the Immaculate Conception where she waited three more months for papers, as Japan would not allow people from Red China to enter even with a Vatican passport.

Rose entered the novitiate in Obayashi, Japan, in 1952. Eventually, she would go to Kenwood to continue her formation, but the U.S. at that time, hesitated to accept people from Red China, and Rose had to wait six months before departing for Kenwood on a cargo ship, arriving in the U.S. in June 1952. She went on to make her first vows at Kenwood on June 24, 1954. Sister Chen returned to Japan in 1955, first to Obayashi and later to Susono, the location of a new novitiate. Later she was sent to Belgium to practice her French before probation. This was her first experience of the European culture and the international Society. On February 10, 1960, she made her final profession in Rome. After her final vows, Sister Chen was one of four nuns who were sent to Pali Hsiang, Taipei. Later joined by three more sisters, they founded Sacred Heart Middle School. The school, located in the suburbs of Taipei, was in a “primeval environment,” flanked by a mountain in back and the Tamsui River in front. While the school was being built, the nuns lived in a small, makeshift “white house” with no running water. With the intense heat, the water stored in two tin barrels outside the house, was always hot for washing. The school opened in September 1960 with 17 students. The second year, with the first wing of the school building completed, eighty students were enrolled. Sister Chen loved all aspects of her role of surveillante, class mistress, dormitory mistress, spending 24 hours a day with the girls.

In 1968, Sister Chen was sent to Tokyo to complete studies for her master’s degree. In 1970, she returned to Taipei, and became principal of Sacred Heart High School for two years. She went on to doctoral studies in the U.S., enrolling in the University of Detroit, majoring in English language and literature. She received her doctorate in 1977.

The late 1970s brought changes to the relationship of outsiders wanting to do business in China. During this time, Sister Chen confided her dream of returning to China to Sister Camacho, the superior general, who was visiting the U.S. As it turned out, two other sisters were also inspired to return to China. The three made Hong Kong their base; but after six months, they realized that in order to remain in China they would need to pursue citizenship in another country. Sister Chen began the process of becoming a U.S. citizen; when she completed the requirements, she was sworn in on June 11, 1985. After 30 years, she returned to China where she taught at the university level and saw tremendous changes in the nation and in the qualities of the students.

In 2005, the superior general, Sister Clare Pratt, and her councilor, Sister Son In Sook, made a long-awaited visit to Sister Chen and Sister Theresa Chu in China, in effect putting a seal on the Society’s China mission.

After many years in China, Sister Chen retired from active ministry and moved to the retirement community at Oakwood in Atherton, California. She experienced a period of adjustment since she had lived so long in a different culture and lifestyle. With the help of her sisters at Oakwood, Sister Chen came to know the beauty of the place and the relationships she cultivated with her sisters, with students at the school, and in involvement as a spiritual director with the Legion of Mary. As Sister Chen would recount her many blessings, she waited for the precious gift of life in eternity with the Lord Jesus.

In the early morning hours on November 11, 2021, Sister Rose Chen died peacefully. She was surrounded by her loving family, dear alumnae and friends who called her their mother and mentor. Her Oakwood community members were also there to accompany her on her journey home to God.