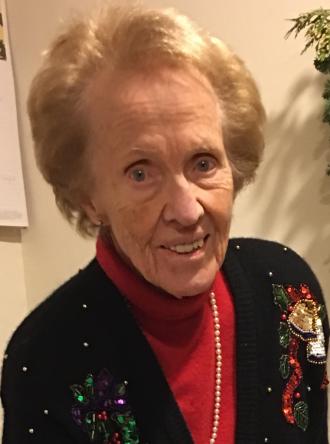 Rosemary E. Sheehan, a Religious of the Sacred Heart, was born on May 26, 1926 in Brooklyn, New York to Dr. George A. Sheehan and Mrs. Loretta Ennis Sheehan. Affectionately known from college days as “Wickie,” she was the middle of fourteen children.

She attended St. Saviour High School in Brooklyn, New York graduating in 1943. She enrolled at Manhattanville College in Purchase, New York and completed a BA in Nursing in 1948. Following graduation, she entered the Society of the Sacred Heart in September 1948 at Kenwood, in Albany, New York. She took First Vows in 1951 at Kenwood and made her Final Profession in Rome, Italy in 1957.

Wickie’s ministerial career began in 1951 at the Convent of the Sacred Heart in Rochester, New York, where she was a teacher and Mistress of Health. From 1953-1956 she worked at the Convent of the Sacred Heart at Noroton, Connecticut where she taught and worked in the infirmary and served as Dormitory Mistress. Following Final Vows in Rome in 1957, Sr. Sheehan returned to Manhattanville College for seven years as the Director of the College Infirmary and Mistress of Health. She then moved to the Convent of the Sacred Heart at Kenwood where she was a member of the faculty. In 1965 Sr. Sheehan began her almost 50 years of ministry at Convent of the Sacred Heart, Greenwich, twenty-two years of which she served as Head of the Upper School during the turbulent times of the 1960-80’s. Generations of alumnae were touched by her wisdom, fidelity to them and their lives and willingness to help them through times of joy and sorrow. During this time, she founded and directed a summer tutorial camp at the school for inner-city children, which lasts to this day, serving 300 elementary school children. In 1988 she worked as Director of Campus Ministry and Community Service at Stuart Country Day School of the Sacred Heart. She continued her efforts to bring the girls to serve among the poor and worked with a program at Martin House in Trenton, NJ. There she worked with a team of other adults and a committee of nineteen students planning and coordinating the work of community service and liturgy. She returned to Greenwich in 1991 where she continued her work as Director of Outreach fostering the school’s commitment to the Carver Center in Port Chester, where she also served on their Board. For over 25 years, Headstart children came to campus every Tuesday to be enriched by a faithful group of alumnae, parents and past parents.

In conjunction with her work in the schools, Sr. Sheehan served on the Board of Trustees of the Convent of the Sacred Heart, at 91st street (1978-1982) and Stuart Country Day Board of Trustees (1978-1982). She also served as a Provincial Chapter Delegate and member of the Steering Committee (1981-1982). From 1978-1982 Sr. Sheehan was chairman of the Provincial Advisory Council. She was also a member of the steering committee of the NCOG evaluation in Greenwich (1982) and the Bishop of Bridgeport Committee on Human Rights from 1967-1970.

Sr. Sheehan’s death was unexpected. She was recovering from a fall for the past month and nurses and caretakers marveled at her preferring to praise and gratefully accept their care rather than draw attention to herself. She was hospitalized with pneumonia two days before she died on June 20,2017. Before this, she was active in her community and deeply appreciated by everyone who touched her life.

A funeral mass was held in the chapel of the Convent of the Sacred Heart, Greenwich, Ct. to which almost 500 people came. Five priests joined in the liturgy and loving eulogies were given by some of her family. The school provided a beautiful reception after the liturgy. Burial was at the Kenwood Cemetery with a group of Albany rscj, Fr. Michael Moynihan and Srs. Joan Magnetti and Grace Butler, her beloved Bedford community. She is survived by her sister Elizabeth Sheehan and her brother Michael Sheehan, 80 nieces and nephews, devoted alumnae, colleagues, friends and her religious sisters worldwide in the Society of the Sacred Heart.

St. Madeleine Sophie’s famous adage was so true for Wickie: “At the end of your life the final exam on your death bed, is ‘How much did you love.’”. Wickie lived in her life, her choices, her entire way of being that directive of Sophie to love, to love unconditionally. It was said by everyone from family, to colleagues, to rscj, to neighbors, that they never heard her say a critical word about anyone. People confided in her, followed her wise counsel and coveted her friendship. As the Irish would say, “We will not see the likes of her again.”