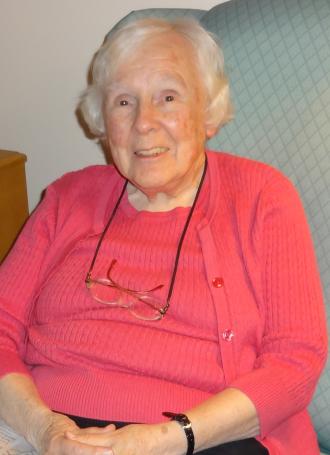 Ruth Dowd was born on January 11, 1919, in Rochester, New York to Louis J. Dowd and Grace Bailey Dowd, the youngest of five children. A graduate of the Convent of the Sacred Heart in Rochester, Ruth attended Manhattanville College of the Sacred Heart in New York, earning a bachelor's degree in Sociology in 1940. Following graduation, she entered the Society of the Sacred Heart on September 8, 1940, at Kenwood in Albany, New York. She made her first vows in 1943 and profession in Rome in 1949. One of her brothers had already entered the Society of Jesus, where he had a long, distinguished career as a missionary in Asia.

In Sister Dowd’s early years, she taught at the Convents of the Sacred Heart in both Grosse Pointe, Michigan, and Greenwich, Connecticut. After profession, graduate study leading to a PhD in philosophy from Fordham University, resulted in her appointment to teach philosophy at Manhattanville. Ruth always called herself “a Manhattanville nun.” As a professor of philosophy and “warden” (a class advisor) for eighteen years beginning in 1949, she was known for her “uncanny ability to make a difference in people’s lives by helping them identify and achieve their goals.” However, visionary that she was, wanting to bring education to those not well served, in 1967, she planned and administered Harlem Preparatory School (the first of its kind in Harlem) in conjunction with the New York Urban League. The goal of the school was to prepare high school dropouts for college. The program at Harlem Prep was successful, with many students being placed in colleges including Ivy League schools.

Subsequently coordinator of teacher education and professor at Medgar Evers College, a branch of City University of New York in the Bedford Stuyvesant section of Brooklyn, Ruth was recognized in 1972 as a Woman of Conscience by the National Council of Women. She was cited for innovative leadership, “unusual perception” and “freshness of spirit”—qualities instrumental in the execution of programs that addressed social problems. That same year she became director of the School of New Resources at the College of New Rochelle during the early years of that school’s innovative, self-designed degree program, where her leadership is remembered.

In 1982, Ruth returned to Manhattanville. Her impact at Manhattanville is felt to this day as a result of the establishment in 1983 of the School of Graduate and Professional Studies, of which she was named dean; it included a successful program in human resources involving courses in leadership, strategic planning, and marketing. Never ceasing to create and innovate even well into her 80s, she created the Sports Business Management degree program in 2007, only the second of its kind in New York State at that time.

In collaboration with three other members of her RSCJ community, Eileen O’Gorman, Cora Brady, and Adele Fiske, she founded Barat House, “a spiritual and life-giving center.” Barat House courses, now at a new location on the campus of Sacred Heart Greenwich, continue to enrich the lives of an adult community that believes that learning is a “life-long process.” In 2016, Barat House itself was rededicated as the Dowd-O’Gorman Center for Creative Writing, which serves as the home for the creative writing programs at Manhattanville.

One of Ruth’s greatest achievements was establishing Manhattanville as a hub for creative writing. The annual Writers’ Week Conference and Writers’ Week attracts talented students and faculty and serves as a natural platform from which to build this talent. The Writers’ Week evolved into a full time program, The Master of Arts in Writing, where writers feel a sense of community.

In 1999, Manhattanville honored Ruth with the Women of Spirit award. In her acceptance remarks, she stated that “Lifelong learning: conscious pursuit of new knowledge and skills, is the essential component of lifelong living…. So what does it all add up to? It adds up to the fact that our life here on earth is to be as much as we can be. It is for living and learning.”

In 2004, Manhattanville Board of Trustees awarded an honorary doctorate to Sister Ruth Dowd and, in 2009, conferred on her the title of Dean Emerita in recognition of her lifetime achievements and work. Upon receiving the conferral, Sister Dowd said, “My career was very exciting. Could I do it again? I don’t know; but I must say, I have had a good time doing it.”

Finally, anyone who knew Ruth knew her as a dog lover and the companion of a long line of dogs revealing the gentle, loving side of Ruth, which a quick wit and incisive intelligence often concealed.

Ruth retired to the Abba Community in Albany, New York, in 2011. She moved to the Teresian House Community in 2013, where she celebrated her 100th birthday in January. Ruth Dowd, a consummate, lifelong justice seeker, risk taker, and visionary educator, died peacefully on May 31, 2019. Her funeral Mass will be celebrated in the chapel at Teresian House on June 11, at 11:30 a.m., with burial at Kenwood Cemetery.

Wed, 2019-06-05 18:47
<p>When I heard of Sister Ruth's passing, I immediately felt a deep sense of grief. I hadn't seen Ruth for at least ten years, but I have carried her in my heart all these years. I acknowledged my debt to her in my first book.</p> <p>When I met Ruth, I was a harried businesswoman, worn out from dealing with misogyny and the general anonymity of corporate America. I wanted to take one writing class; she talked me into signing up for the masters' program. How lucky I am to have done so. Being in the writing program that she created was a life changer. She was a character, to say the least, with a great heart. A life well lived. Goodbye, Ruth.</p>

Wed, 2019-06-05 19:18
<p>Sister Ruth,</p> <p>You certainly left your imprint on the lives of those that were fortunate enough to have known you.&nbsp; A great wit, a wonderful sense of humor and a passion for achieving beyond normal limits. You'll continue to inspire and challenge us as we go forward.&nbsp;</p> <p>Lori Gage</p>

Wed, 2019-06-05 23:45
<p>I was &nbsp;privileged to take several philosophy classes with Mother &nbsp;Dowd. They were among the most formative experiences I had at Manhattanville. The depth of her knowledge, her wit, and her incredible methods of teaching were awe-inspiring. &nbsp; What I learned from Mother Dowd served me well as a mathematician. After all these years I &nbsp;recall in vivid detail the struggles and the &nbsp;joy in addressing the challenges she &nbsp;gave to her students. &nbsp;Her life and work have enriched all of us who have been blessed to know her. Thank you Mother Dowd and rest in peace.</p>

Thu, 2019-06-06 10:21
<p><strong>Sr. Ruth Dowd was a driving force in my life. &nbsp;I first met her, as a freshman at Manhattanville, in 1958. &nbsp;However, it took me 42 years to earn a degree. In 2000, I finally earned a Master of Arts in Writing From Manhattanville, after first receiving my BA from the College of New Rochelle, New Resources. &nbsp;This was all due to a strong and everlasting relationship with Ruth. &nbsp;She encouraged, supported and made it possible for me to return to college, after my children were raised. &nbsp;I do not grieve. instead, I celebrate this outstanding, loving and caring friend, as she Rests In Peace with her special friend, Eileen!!</strong></p>

Thu, 2019-06-06 12:42
<p>It is with deep sadness to learn of the passing of Sister Ruth Dowd, RSCJ. It is also with deep gratitude that I have for Sister Ruth. I was fortunate to have met, and been guided by her leaderhsip in the first cohort in Professional Studies in <span style="display: inline !important; float: none; background-color: #f4f3ee; color: #4c4c4c; font-family: inherit; font-size: inherit; font-size-adjust: none; font-stretch: inherit; font-style: inherit; font-variant: inherit; font-weight: inherit; letter-spacing: normal; line-height: inherit; orphans: 2; text-align: left; text-decoration: none; text-indent: 0px; text-transform: none; -webkit-text-stroke-width: 0px; white-space: normal; word-spacing: 0px;">Organziational Management and Human Resource Development Master's program </span>at Manhattanville College. The program and degree launched my career. Thank You, Sr. Ruth for the opportunity to meet you, learn from you, and be acknowledged by you - you gave me so much confidence to pursue my passions. We celebrate an extraordinary life that has touched so many others. Your legacy will continue as the pillar of caring, giving, inspiration, learning and achievement for all of us.</p>

Sister Dowd was Warden for

Thu, 2019-06-06 14:10
<p>Sister Dowd was Warden for the Class of 1966. I'll always be grateful to her and the other wonderful nuns I met at Manhattanville. I was able to visit her at Teresian House and I shall try to be at her funeral next week. Even though I read every assignment in Greek Philosophy, I didn't understand much of it. Eight years later, when my brother had to read the "Cave Allegory", he was baffled too. When I scanned the passage, it was so easy to understand. Beneath her exterior, she had a heart of gold!&nbsp; God Bless all the sisters living and deceased.</p>

With Gratitude and Admiration ...

Mon, 2019-06-10 17:31
<p>Sister Dowd took troubled Manhattanville students under her wing, spending her after-dinner time meeting individually with each one in a big hall or parlor in the Castle, asking questions and giving guidance, encouragement, and support. &nbsp;I was one of them. &nbsp;How incredibly generous and deeply caring she was to do this after a long day!</p>

Grateful to have know and loved Mother Dowd

Mon, 2019-06-10 18:06
<p>I was very luck to have met and known Mother Dowd and Mother O’Gorman from a young age thanks to a lifelong friendship with my aunt and mother, her students at Manhattenville. I am so saddened by this loss, but feel inspired and impressed by her presence all over again in reading this chronicle of a life lived in service and strength.&nbsp;</p>

Tue, 2019-06-11 10:55
<p>Ruth was a pioneer with a wicked sense of humor. I worked for and with her for years and will always remember her as dear friend and mentor. We laughed every day. I will always love this woman! Peace on the journey, dear Ruth!&nbsp;</p>

Mother Dowd was the Warden of

Wed, 2019-06-26 10:06
<p>Mother's Dowd's American Philosophy class at M'ville helped me understand the world in new ways,&nbsp; ways that study of the ancients had never done before. Reading Wiliam James in that class --&nbsp; at last, I knew I was a pragmatist!&nbsp; After graduation, I followed Mother Dowd's fascinating &amp; productive career and have been continually impressed with her successful efforts to help others reach their own goals. &nbsp; Rest in peace after a remarkable life.</p>