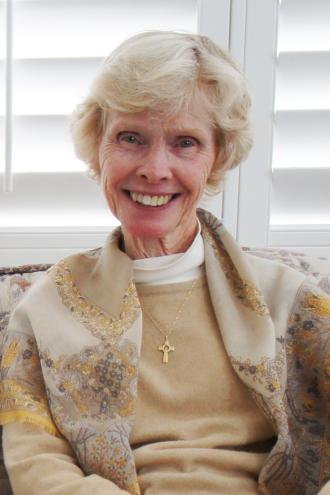 Sarah Elizabeth (“Betsy”) Walsh, a Religious of the Sacred Heart, was born on May 30, 1933, in Cumberland, Maryland, to William C. Walsh and Sarah Elizabeth Walsh. Her only brother, William, died in 1991. She is survived by many nieces, nephews, grandnieces and grandnephews, family she loved dearly.

Affectionately known as “Betsy,” she graduated from the Convent of the Sacred Heart, Eden Hall, in Torresdale, Pennsylvania, in 1951. Sr. Walsh was an alumna of Manhattanville College in Purchase, New York, graduating in 1955 with a BA in English and Russian. Following graduation, she entered the Society of the Sacred Heart at Kenwood in Albany, New York, made her First Vows in 1958 at Kenwood, and her Final Profession in 1964 in Rome, Italy.

Following her profession, Sr. Walsh taught at the Convent of the Sacred Heart in Albany, New York. In 1967, her ministerial career shifted to higher education when she became dean of the freshman class at Manhattanville College as she completed her own doctoral studies at Harvard University, specializing in medieval literature. From 1969 to 1973, she was a teaching fellow at Harvard and also a lecturer at Newton College in Massachusetts. Upon the completion of her Ph.D., Sr. Walsh was an assistant professor of English at Louisiana State University in Baton Rouge, Louisiana. In 1975, she joined the faculty at the University of San Diego (USD) where she taught a range of English courses for forty-two years, from Chaucer and Dante to the poetry of Gerard Manley Hopkins, Elizabeth Bishop and Langston Hughes. In addition to her teaching, Sr. Walsh presented papers on the medieval era at a number of conferences and published numerous essays and two books, The Tale of Ralph Collier and Light of Learning, a collection of the essays of Morton W. Bloomfield, which she edited with a colleague.

Sr. Walsh was involved in many campus activities. She served as Chair of the English Department and on a number of committees, among them the Faculty Senate, the Rank and Tenure Committee, and she directed the Graduate Program in English. She was also very active in student affairs because of her position as faculty-in-residence on campus. Given her commitment to social justice, Sr. Walsh initiated and supervised for five years the Southeast San Diego Tutoring Project, an ongoing endeavor to assist at-risk children in local elementary and middle schools.

Sr. Walsh received a number of grants and awards for her work: numerous research grants from the University of San Diego; Visiting Scholar at Harvard University; University of San Diego University Professor, and three National Endowment for the Humanities Summer Seminars and Institutes. Deepening her love of Russian language and literature, Sr. Walsh was also Visiting Lecturer three different semesters at Moscow State University. In addition to her robust academic life, Sr. Walsh was an active member of the Immaculata parish on the USD campus, singing in the choir and participating in the many parish activities.

A funeral Mass will be held at the Oakwood Retirement Community, Atherton, California, on Saturday, July 29, at 10:00 a.m.

Wed, 2017-06-28 20:22
<p>Saw the notice of death for Sr Betsy Walsh through Maryknoll connection --she was the niece of the late Bishop James Edward Walsh.</p> <p>Animated and supported our faith as well as our minds. &nbsp;&nbsp;</p>

Fri, 2017-07-07 19:55
<p>Betsy was possessed of a great intellect, a sound mind and a great heart. Her manner was understated and low key, but she always wanted the best for her family and friends.&nbsp; She helped my sister find a teaching position at University of San Diego in the English Department many years ago.&nbsp; When my sister passed at the age of 43, she expended an enormous amount of time and energy propping up my family at a time of indescribable grief and perpetuating her memory at USD.&nbsp; Betsy, may the rose rise up to meet you, may God hold you in the palm of his hand, and may you enjoy eternal happiness within the community of saints.&nbsp;</p>

Fri, 2017-07-07 21:16
<p>I was very fortunate to have had Mother Walsh as my English teacher at Kenwood about 1960. &nbsp;I remember her as being very animated and I respected her for illuminating the gist and nuances of a text.</p>

Wed, 2017-07-26 11:08
<p>I was fortunate to take the Chaucer class taught by Betsy Walsh in 2004. She was a wonderful teacher! Because of her I continued to study medieval literature in graduate school. She touched so many lives at USD!</p>

Thu, 2017-09-14 04:54
<p>I was very fortunate to have studied under Dr. Elizabeth "Betsy" Walsh while an undergrad at USD. I graduated in 1979 and have never forgotten her gifted method of teaching and the clarify and depth of her classes particularly in Chaucer and Shakespeare. I stayed in touch with her for many years until recently. She was a beloved professor from whom I learned so much. &nbsp;A true example of peace and compassion in action and a brillant scholar, she will be missed by many.</p>