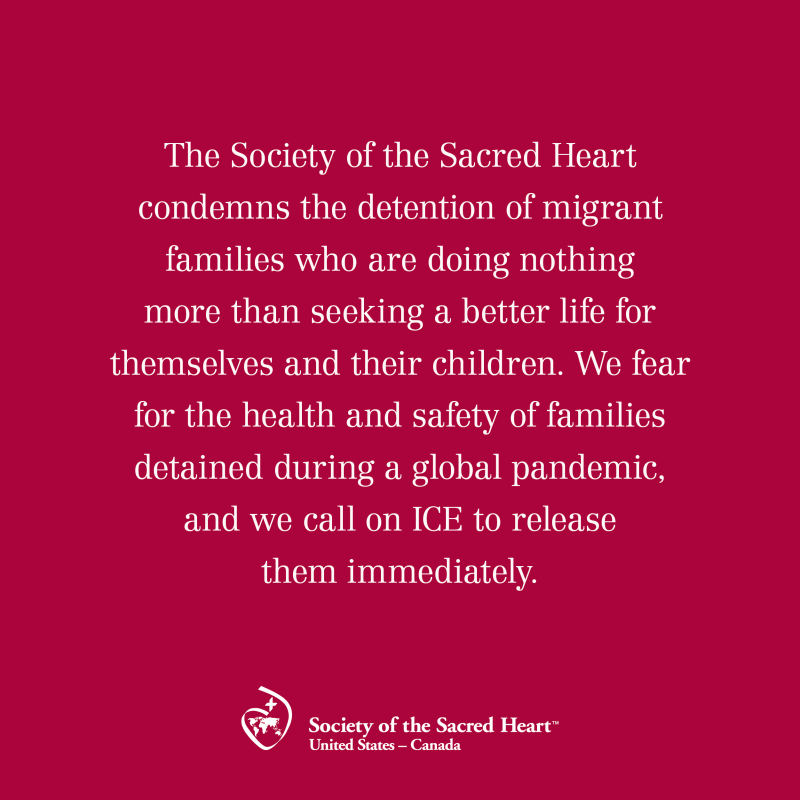 The Society of the Sacred Heart, United States – Canada Province, has signed a statement by Catholic leaders demanding that U.S. Immigration and Customs Enforcement (ICE) immediately release all children and their associated family members detained at three detention centers named in a recent federal court ruling. In the face of a global pandemic, any delay can be deadly. We also call for an end to the fundamental injustice of deporting and detaining children and families seeking to exercise their right to seek asylum and protection in the United States. The full statement, along with a press release, is below.

Against the backdrop of a global pandemic, we, representatives of national Catholic organizations, recognize that the recent ruling by U.S. District Court Judge Dolly M. Gee to release children from family detention centers by July 17th seems to be a positive step for their health and freedom. However, as national organizations whose members accompany and advocate for immigrant families, we know firsthand that the situation is more urgent and complex than it appears.

First, children and parents currently detained are already experiencing untenable living conditions and grave medical issues, exacerbated by the traumatization of being treated like criminals. Couple that with the positive COVID-19 cases among the families and the facility employees and the situation is not just dire, it is deadly.

Second, similar rulings by the federal judge have already been made during the pandemic and yet the children have not been released. We are concerned that ICE and collaborating agencies may seek to comply with the judge’s July 17th deadline by recreating a family separation policy similar to those deployed in the past. This is unacceptable.

Therefore, we, the undersigned Catholic advocates join the #FreetheFamilies Campaign in calling for immediate, and comprehensive, conclusive action.

We know that a unified voice and action can achieve change. On July 18, 2019, more than 70 Catholic leaders joined in prayerful public witness and nonviolent civil disobedience at the U.S. Capitol in Washington, D.C. to demand that our nation’s leaders end child detention. This Catholic Day of Action for Immigrant and Refugee Children was followed by other acts of advocacy, public witness, and civil disobedience that brought together hundreds of people calling for the end of child detention.

On September 4, last year, Cardinal Joseph W. Tobin, at a public witness convened by the Catholic advocates outside of the ICE office in Newark, New Jersey, described the detention of children in grave terms, saying, “These draconian measures are not, they are not, a solution to our broken immigration system. They are violations of human dignity and are contrary to all religious teachings and the sacred call to care for our most vulnerable populations.”

This same spirit must prevail now. There is no humane way to detain children and families. We will not be silent until every family is free.

To sign a petition supporting the #FreetheFamilies campaign, visit https://actionnetwork.org/petitions/tell-ice-freethefamilies/