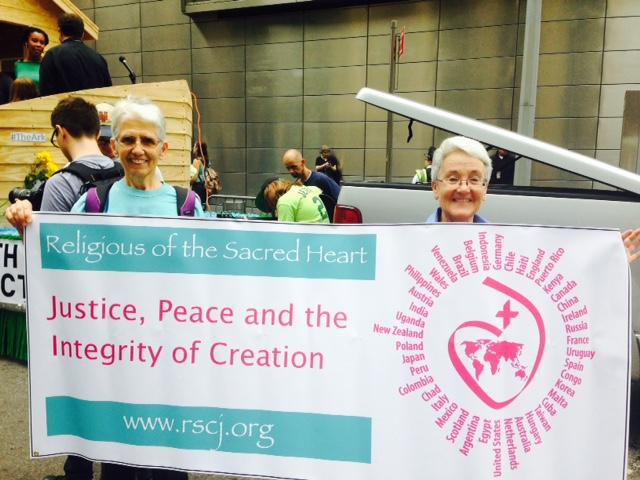 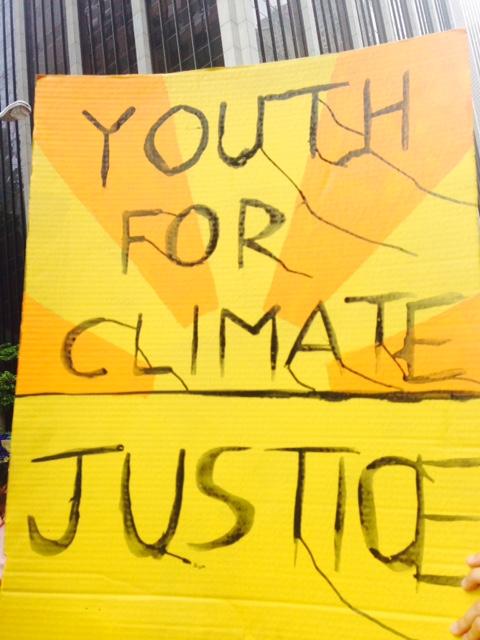 Over 311,000 people gathered in New York City on September 21st to express their worry about the future of this planet that is our only home. For some it was the prospect of rising temperatures caused by carbon emissions that had them marching and carrying signs. For others it was the callous pollution of ground water by fracking operations. For others, it was the injustice suffered by the poorest and most vulnerable peoples on earth who are always the first to suffer from the profit seeking of corporations, nations and wealthy individuals. Tucked into the crowd, just in front of the Noah’s Ark float, were three RSCJ and several colleagues carrying a sign with the familiar Sacred Heart logo surrounded by the names of all the countries where RSCJ serve and the words “Justice, Peace and Integrity of Creation.”

We had chosen to join the section of the march where people of every faith tradition in the country gathered at 11 AM to pray, chant, dance and dialogue during the three hour wait to take our place in the river of demonstrators moving steadily down 6th Avenue. Up on the Ark a man wearing a Roman collar stood near a woman wearing a Muslim head scarf, while over on the Mosque float, Jews wearing skull caps grinned at young men sporting “Don’t Panic, I’m Islamic” tee shirts. One amiable atheist held up a sign that read “Atheist for Climate Justice” with the hatch tag #Good without God.

Cecile Meijer, RSCJ, who represents the Society of the Sacred Heart at United Nations, and I took turns holding up one end of the banner while Gwen Hoeffel, RSCSJ, recently back from a lifetime spent serving in Japan, held up the other.  Somewhere in the press of the crowd behind us El MacLellan, RSCJ, gave up trying to find us using her cell phone and settled in to walk the two and half miles with those gathered under the small yellow flag that said “Catholic.” Several blocks away Judy Garson, RSCJ, had chosen to march with friends and colleagues in the section of the march for immigrants and Rosemary Hobson (Associate) marched with the women religious with whom she had traveled from the Rhode Island area to New York. Somewhere else in the huge crowd, Helen O’Reagan, RSCJ, was also marching.

It’s difficult to capture the mix of excitement and weariness, joy and anxiety that an event of this magnitude evokes. I felt like weeping for some reason when I looked up and saw students from a business college ten stories above us hanging out the windows waving signs of support but when I saw the man wearing a sandwich board insisting that all black people should flee from the group because they were being used as pawns, I felt a wave of despair at the psychic wounded-ness of so many in this world.

When I got home to DC I found an email from a friend who shared an article written by a young radical who criticized the “family friendly,” non-confrontational methods of 350.org and other organizers of the march, while admitting that it still was worth doing. I am certainly glad I went. I met amazing DC residents on the bus; people who bike to work every day and who live in tiny houses to minimize their carbon foot print and who grow their food in community gardens. Most of them were in their 20s or 30s and full of hope for the future they were already building together.

What really matters is what we all do now. As a result of the emails flying back and forth about this March on the Healthy Waters list serve, Mary Jane Ferrier has agreed to float a proposal, with excellent background information from Barb Dawson, suggesting that the USC Province consider divesting its portfolio of investments that profit from fossil fuel extraction or processing. There is nothing to be gained by allowing ourselves to be discouraged or cynical in the face of the very frightening changes that may very well be ahead of us, but there is everything to gain if we stay focused and each do what we find within our reach to protect this, the only earth we have.

(Diane Roche, RSCJ, is the director of the Office of Justice, Peace and Integrity of Creation at the Stuart Center in Washington, DC. See more photos from the New York City march. )