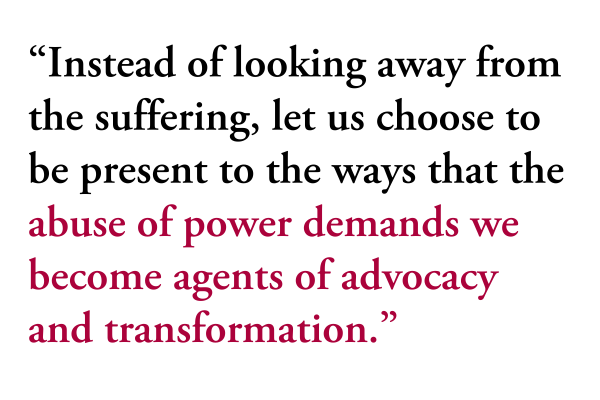 As we approach the great Feast of Pentecost, when the courage to speak the truth and witness to the invincible power of God’s love became visible in the birth of the Church, we stop to reflect on the gun violence in the United States and the responsibility we have for transformative education and love.

With all people of faith and compassion and for the victims of the massacres, their families and all those affected by these senseless acts of violence, we pray:

Let compassion and courage be our companions in these days of shock and grief. We are called to be “Artisans of Hope in our Blessed and Broken World.” Instead of looking away from the suffering, let us choose to be present to the ways that the abuse of power demands we become agents of advocacy and transformation. Let us be those who cultivate hope by acting with courage, while refusing to perpetuate cycles of violence in our speech, our use of social media and our actions. Let us be those who choose faith, not fear.

President Biden spoke powerfully on June 2, 2022 about the impact guns and violence have in the lives of our children, “According to new data just released by the Centers for Disease Control and Prevention, guns are the No. 1 killer of children in the United States of America. The No. 1 killer. More than car accidents, more than cancer. Over the last two decades, more school-age children have died from guns than on-duty police officers and active-duty military combined.”

As educators responsible for the safety of students in the 25 Network of Sacred Heart Schools in the United States and Canada, we share in a special way the anguish of the teachers, administrators and parents in schools where the unthinkable has happened. As an organization committed to “revealing God’s love in the heart of the world,” we struggle to help students reconcile this senseless loss of life with a compassion that is deep enough and brave enough to seek solutions to the brokenness that causes such violence.

In the wake of yet more mass shootings in the United States, the Society of the Sacred Heart, United States – Canada Province, joins its voice with the families of those killed by gun violence and with people of good will from all faiths, who are demanding an end to the legislative paralysis that prevents common sense gun control from being enacted in this country.

We join with and echo the many other religious and civil groups in calling for:

In addition, we support holistic measures, such as the promotion of mercy and peacebuilding in our communities through restorative justice policies and practices, ongoing encounters and discussions at the local level regarding violence in communities.

Along with Pope Francis, we call for our legislators to overcome partisan differences and “go out and meet the other in dialogue, pardon and reconciliation, in order to rebuild justice, trust and hope around you.” (Pope Francis, January 1, 2014)

As a Sacred Heart family, let us invoke the Novena of Confidence in this time of need for change in the hearts of those elected to govern, protect and lead, and particularly, for those impacted by gun violence throughout the United States, especially in communities where mass shootings have replaced trust with fear.

We pray,
Lord Jesus, through the intercession
of Saints Madeleine Sophie and Philippine Duchesne,
to your Sacred Heart, we confide this intention.
Only look, and then do what your heart inspires.
Let your heart decide.
We count on it.
We trust in it.
We throw ourselves on your mercy,
Lord Jesus,
you will not fail us.
Amen

You can engage in local efforts, educate yourself and those around you, and call on our leaders to demand immediate action and gun violence protection by: